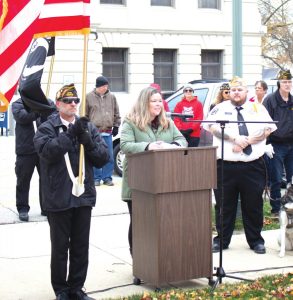 JENNIFER HOBBS gives a speech at the end of the Veteran’s Day Parade at the Douglas County Courthouse Nov. 11. Photo by Dominik Stallings.

By Dominik Stallings
“I am a warrior. I will never accept defeat. I will never quit and I will never leave a fallen brother or sister. If they are hurt, I will carry them. If I can’t carry them, I will drag them. I will help them face their enemies, including the demons from within. They are my brothers and my sisters. I am a veteran.” said veteran Jennifer Hobbs after the Nov. 11, Veterans Day parade at the Douglas County Courthouse.

This mantra speaks true to many veterans. For Hobbs, it was especially important when Tuscola local and VFW District Commander Sean Conner helped during one of her most tragic moments.

Hobbs and her husband Ryan met Conner in February 2020. They got drinks in a bar after attending a banquet for the VFW Voice of Democracy essay contest. Hobbs serves as a district chairperson for the contest.

As they were leaving the bar, Jennifer fell unconscious and cracked her skull in two places. Jennifer’s husband, Ryan was not allowed to come near her or board the ambulance before police officers ensured he didn’t cause the damage. Jennifer said it was the most traumatic thing her husband endured since being hit by a roadside bomb in 2004 during his service alongside her.

Jennifer said that they made it through that night because of Conner. He encouraged Ryan to keep it together and ensured that he didn’t get detained or arrested.

Conner told first responders that he was Ryan’s brother in order to defuse the situation. Jennifer said that it wasn’t a lie; she considers Conner to be her brother and part of her family now.

“It wasn’t much of a lie. In the military, we’re a brotherhood.” said Conner, “ I’m a Marine and they’re Army National Guard, but that brotherhood transcends through the different branches.”

Conner is a veteran service officer and helps others get resources for disabilities and other needs after their service through the Veteran Affairs office. He said he also makes sure that the VA follows its own guidelines.

Hobbs said Conner spoke with them about her husband’s claims. The group was appalled at what hoops they had to jump through to get treatment for Ryan’s facial reconstructive surgery. He’s been helping them refile and get the help they need.

“Jennifer is happy with what I’m doing for her and Ryan. I’m happy and proud to know them. They’re great people. The way that Jennifer is so strong about her struggles and open and transparent about it. I hope that’s reaching more veterans and especially female veterans and giving them some strength to stand forward.” said Conner.

Hobbs said, “The connection I have with veterans is not like the other connections I’ve had in my life. It’s more. It’s a family.”

In her message at the courthouse, she wanted to recognize not only veterans like Sean Conner but also the families and friends of veterans. She calls them “hidden heroes,” the people who help veterans heal after returning from military service.

Hobbs is originally from Lincoln and now lives in Sullivan. She’s always held the military in high regard and enlisted after putting on her brother’s Marine uniform. It was the moment it clicked for her.

She also comes from a low-income family so it was important to her to receive the sign-up bonus and the possibility to go to college. She enlisted in the Army National Guard when she was 17 years old, 7 months before the September 11 attacks.

“I always thought I’d be a lifer, but one deployment from Dec. 7, 2003, to February 2005 changed the path of my future. It changed me, forever. It was the worst year of my life, but also the best year of my life.”

Two years later she deployed to Iraq with the 1544th out of Paris (Illinois). She said she felt like a deer in headlights, thinking that the conflict might be over after Saddam Hussein’s capture. Now she realizes that she was young and ignorant.

Before returning home, she experienced five people being killed in action and another 28 others were injured. One of them was her now husband Ryan, who she met while on tour.

“Memorial Day is a day I take to remember my battle buddies who made the ultimate sacrifice. I can’t help but think about them on Veterans Day,” said Hobbs.

Hobbs said that nowadays Veterans Day has taken on a different meaning for her. “I had this conversation with other vets last night. Some don’t like the attention. Some are still in limbo about how they feel about it. That’s another reason why it means so much.”

She was able to earn two master’s degrees in education, first in curriculum and instruction and second in educational leadership. Not only that, she also spent 12 years teaching in Sullivan. Once she had the financial opportunity, she wrote her first book “Calmed: Growth after Trauma.”

The book is a story told from her perspective and that of her husband. She writes about their time during the deployment, their budding relationship and the following years of struggle and trauma after a devastating explosion.

Last year after publishing her first book, Hobbs decided to start several projects. She was able to talk to more veterans and wanted to help them through their struggles. She hopes her work will be an important part of her legacy.

“It all really comes down to wanting to live a meaningful life,” said Hobbs.

She created the “Celebrate the Struggle” podcast where she talks more in-depth about the struggles and challenges in life and also some other more uncomfortable topics.

Jared Diehl from the Louder Now Podcast described it as “Real, raw and authentic.”

Besides her podcast, she’s also started a wellness program called “F.O.U.N.D.” Originally the program was a four-week workshop where she presented different letters each week. But since then she decided that it would be better served as an online service through her website.

The workshop breaks down into: focus on yourself first, open the conversation, have uncomfortable conversations, and navigate the needs and commitment to continue on the path.

“As I dove into it – I realized that this applies to life in general. Other people suffer too and sometimes it’s not easy to help other people,” said Hobbs.

Hobbs believes that involvement from friends and family can be some of the best influences on a veteran’s journey to growth and healing. The workshop can help them have the necessary conversations, and help them do it tactfully.

The framework also applies to her own life, too. Right now, her husband is going through the process of facial reconstructive surgery. The stress of it all also bled into their home life, but the framework helps them work through it.

“It rocks the boat for sure,” said Hobbs.

Hobbs said that some of her first readers wanted to learn more about her life post-combat zone, but she decided that it would be a book all on its own. She’s planning to release her second book in 2023.

She’s also hoping to write a children’s book related to the military and what some children might experience with veterans. 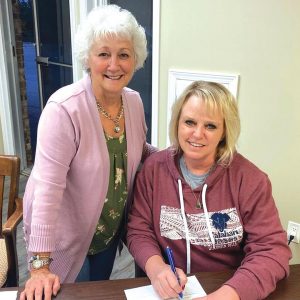