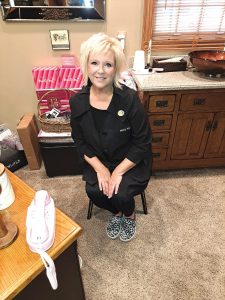 By Tony Hooker
When Mary Kay Ash started her company in 1963, she was looking for a business that would allow her the flexibility to remain active in her church, her family and her community.

Fifty-nine years later, her company, Mary Kay Cosmetics, has achieved all that and more, not only for her, but for several generations of moms and dads who are looking to keep the work life home life balance.

One such person is Villa Grove’s Robin Hettinger, who has successfully balanced careers as a farm wife, a registered nurse and a Mary Kay consultant and director. I recently caught up with the proud Villa Grove High School grad, to see how it all came to be.

I had no idea!<laughs> I knew I was going to be a nurse. I wanted to be a nurse, because my dad had been a surgical tech in the service, and I always heard his stories. Honestly, when I grew up on Matteson Drive, any time someone fell down or something, I made them come to my house and I would put peroxide on their wounds and bandage them up!

You and Steve were destined, also, right?

He asked me to prom his junior year, which was my sophomore year. I was the prom maid, and I told everyone that I was going stag that year with the girls. One night I came home from jazz band practice and my mom told me that Steve Hettinger had called. I said he’s going to ask me to prom, and I didn’t want to go, because I had told everyone that I was going stag. He called back, and he asked me. I talked to my mom because I had told some other people no, and she said, “If you really like him, it will all be ok,” and so I said yes, and that was it.

How did you become involved in Mary Kay?

When I turned 35, I started noticing some wrinkles and things, and I would hear friends and family members talk about what they used, and I went to the mall and had a makeover, in front of everybody. It was very uncomfortable, but I loved every minute of it. For everything that I wanted, it was going to be hundreds of dollars and with four kids, I thought “There’s no way.”  I had been introduced to Mary Kay in High School, but I hadn’t really stuck with it. That had been several years, and Mary Kay had changed, and I hosted a party, and I could get everything I wanted. I was a great customer, and I’m still my best customer today! <laughs> It was through Mary Piercy. I purchased through her, and she kept inviting me to meetings. I was already the Friends of Music secretary and the high school cheer coach, with kids involved in everything. Amy was a senior, going to Millikin. I played every week at church, and I do weddings and funerals, and I just couldn’t do a meeting. Of course, I had no clue about what their meetings were.  She asked me consistently. I called her one time and there was a cute little thing in her book that I wanted to get for my girls, and she didn’t have it. I must have said something like “how long is it going to take?” because she told me “Why don’t you just come in and get it yourself?” She told me that I didn’t have to go to meetings. She came out, not knowing much about computer stuff, and I logged in and joined. After that I thought “what have I done?” <smiles> I joined fully intending to only be a ‘personal use’ member, which you can do in Mary Kay.  When I got my kit, I started reading more and I just fell in love with the company, I mean, this company is amazing. It stands by what it says it will do, it goes above and beyond American standards, so you know it’s safe. Mary Kay started this with God first, family second and career third, and it’s a 50% profit. No other company that I know of does that. They stand by their products. As a consultant and director, I’m guaranteed. The customer is also guaranteed, so if they take a product home and find it doesn’t work, I can either refund them completely or find another product, and the company will reimburse me for that product. I didn’t know this at the time I joined, but when someone joins, they try it for a year, and if they decide that it isn’t for them, Mary Kay will do a 90% buyback. When we go to meetings or seminars, they always start with prayer. Our products are made in America, supporting American jobs.  We have access to our scientists, and they can work with us to determine exactly what each product contains. And they give us prizes! <laughs> I just got excited about the prizes. I joined, because I wanted good skin care products for my daughters, and eventually actually Casey. A friend from Amy’s dance team called and said her son was getting married, and wanted me to help out, so I went up there and she bought from me, and it was significant. I didn’t really understand it all, in terms of business-wise until my sister-in-law had a party in the neighborhood and it was a big party. Each time I would come home and have to put another order in, and Steve would be like “That’s good!”  He has always been so supportive. I didn’t come in with inventory because it wasn’t my original intent.

How many levels are there?

We all come in as consultants, we all start the same, and then you have the ability to progress. There’s no one holding you back. You can advance as much or as little as you want. The company will also give you feedback as you grow your team. With one team member, you get a bonus from the company. It’s not a pyramid-like some companies. I didn’t really understand that, but this wonderful, Catholic Christian woman called me up and said “You’re my number 1 consultant. I’m your director.” Rosalie Medjesky was her name, and she kept trying to get me to come to her meetings, but I was always busy. Finally, she found a time when I could join, and when I walked in, it was like a family. It’s always happy, there’s no negativity. We’re not working against each other; we just build each other up. I always say that if you come to a Mary Kay meeting, you almost don’t need counseling because they’re so fun and uplifting! You build your team if you want to. You don’t have to, but that’s the way Mary Kay intended it. She wants us to share the opportunity with other women to give them flexibility and an earning opportunity. When you have three members on your team, you earn what’s called the red jacket. Mary Kay went to see a prominent director in the St. Louis area, and when she went to a Cardinals game and saw all the red jackets and she loved it so much that that’s how the red jacket came to be. To this day, there is still Mary Kay day at a Cardinals game. There are different levels that you can move into. When you have 8 team members, as a consultant, you can earn a car.  That’s the only time that you have to meet a quota, and once you’ve established it, you have to maintain it. There are many different national levels that you can work toward, as well.

Didn’t I see that you won a major award through Mary Kay?

You might have. I’ve earned Queen’s Court for sales 10 times, and I’ve earned 7 cars. They say that you shouldn’t plan a vacation when you go into directorship because so much goes into it. It’s a big challenge, actually. You have to have so many team members and so much production and it’s not easy. Once you’ve earned a car, they’ll pay for maintenance on it, oil changes, new tires, and stuff like that. You can even put in and they’ll compensate you for the registration.

What about the family?

Ashley’s in Ohio. She’s an administrator in the church and she has two children who are just a year apart.  Her husband has a catering company called The Mustard Seed and he caters for the bishop and catholic schools. I am a senior director, and Amy is one of my directors. She’s a professional flautist and she has a master’s in Music Ed, but she’s earned her pink Cadillac as a consultant. She’s rocking and rolling. Casey got married and built a home 15 minutes away, in West Ridge in Urbana. He works here on the farm. He’s our tech guy and he’s going to be the one that takes over. Lindy has her degree and taught 9 years in the Marshall School system. She taught special ed and hung up her teaching after her last year. This is first year on the farm. She’s the administrative assistant.

What about the future?

My future is to continue on. I can take this wherever I go. That’s the beauty of Mary Kay. There are women who travel in their motor homes all over the country.

How much longer do you think you’ll be at the school?

I think I’ll be there for as long as they need me. I love being there. I love the kids. I will always cover for Lindsay. (Dowler) I’ve been there so long now that I know all of the secretary jobs and I can cover for them. Last week, I was there answering phones. I was there three days last week.

You were talking before about the pandemic and how you’re starting to emerge from it with in person parties, and things?

It didn’t really affect a lot of our Mary Kay world business-wise. In fact, it blew up. A lot of our women earned their cars through that because we learned to pivot and live in a virtual world.

Before she began the company, Mary Kay was going to write a book, but her friends told her she should start a company. She didn’t even know what she was going to sell, but she had a friend who was a leather tanner, and his hands always looked young when the rest of him didn’t, so she bought the rights to the leather tanning compound and that’s how Mary Kay started.

Mary Kay always said you have to fail forward to success, and that we’re not about profit and loss, we’re about people and love. It’s about building relationships with people.