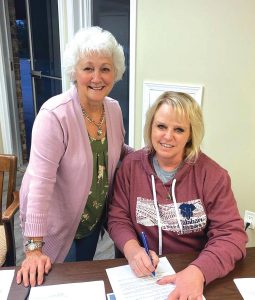 According to the proclamation, several community celebrations as well as numerous cultural, artistic, educational and historical activities have been planned.

Administrator Athey then made a short report in which she noted that an additional $2,000 in delinquent water fees had been collected.

Chief Rea then commented on the Homecoming bonfire incident, stating that Officers Rasmussen and Tibbets moved quickly to address the issue, and that the Villa Grove faculty member was to be commended for his quick actions as well.  He also noted that due to rumors which later proved to be unfounded, there was a strong police presence, both in uniform and undercover, at both the football game and homecoming dance, and that there were no incidents reported at either event. He noted that Officer Tibbetts is doing a great job as SRO, constantly interacting with the children of the school. He finally noted that his office receives complaints about Waste Management trucks every week.

Public works director Lake then noted that the new bucket truck had been purchased, that barricades had been placed at the Pheasant Pointe, and that the city owns a hot tar bucket, purchased new, that has never been used. He asked for permission to sell the equipment.

Mayor Eversole Gunter then made her comments, noting that the community building is progressing nicely.  She too commended the Villa Grove Police Department for their quick actions at the bonfire.

Next, Eversole Gunter called for a consensus on five items of business, including:

• Selection of 2023 fireworks date.  Because of scheduling conflicts, the council chose June 30 as the night of the launch.

• All aldermen were present at the meeting other than Matt Pangburn.