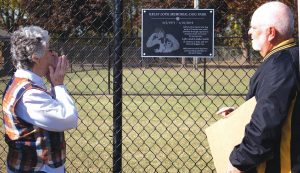 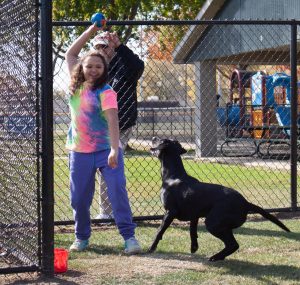 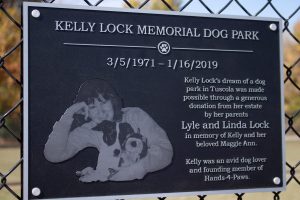 The plaque for the Kelly Lock Memorial Dog Park. Photo by Dominik Stallings.

During the event, Mayor Kleiss revealed a new plaque on the eastern side of the park to Kelly Lock’s mother, Linda. The plaque depicts a photograph of Kelly with her beloved dog, Maggie Ann.

Construction for the dog park finished earlier this year and gave dogs a safe place to play and exercise. The park was funded by Kelly’s estate after she passed away from cancer in 2019. Lisa Sappenfield Boyer, financial advisor, helped Linda and her husband fund the project through Kelly’s estate.

“I’m sure Kelly is looking down on this beautiful day and is astonished,” said Linda. “She wanted a dog park for a long time. It’s her dream come true.”

Linda said she was left speechless by the event and was overcome by emotions.

Kelly’s sister, Donna Lock-Renfro said, “It is amazing. I just wish Kelly could run through with Maggie.”

The event was emotional for everyone involved. The Lock family and mayor Kleiss all had tears in their eyes as they told stories of Linda.

“She was a very dedicated and passionate person,” said Kleiss.

“She was a great gal, tremendous person,” said Kleiss.

Linda said her daughter grew up loving all sorts of animals. She remembered speaking with the mother of a child Kelly played with. The mother admitted that they had to search Kelly every time she came into the house. Kelly snuck a toad into the house through her pocket.

“She was always bringing in bugs, worms, insects and snakes,” said Linda. “That was Kelly.”

Kelly’s former employer, Cabot Corporation, joined the event as well. Kelly regarded her workplace as her “Cabot family.” She was the safety, health and environmental administrative assistant for the chemical production company.