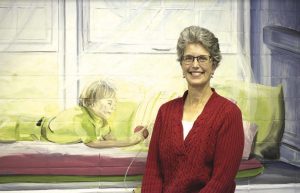 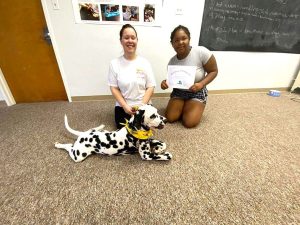 SARAH STCIN (left) with her niece (right) present puppy training certificates which they earned earlier this year in May. Dalmatian Esteban sits in front of the two. Submitted photo. 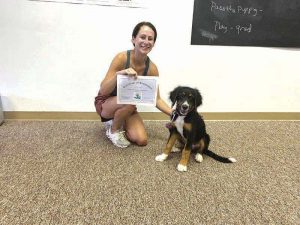 CARISSA COLE sits with puppy Cassie and shows off her puppy training certifcate. She earned the certificate earlier this year in May with Dr. Sally Foote. Submitted photo. 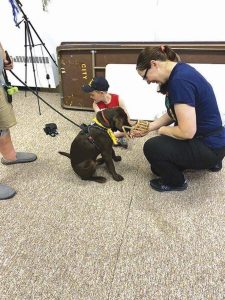 Meaghan Kenny kneels down to a chocolate lab provided by the Schultz family. Kenny took part in Dr. Sally Foote’s puppy training class in May this year. Submitted photo.

By Dominik Stallings
As you walk down the corridors of the newly refurbished Jarman Plaza it feels like you’re looking at a clean canvas; it’s neat, clean and new. You almost forget that the building used to be a hospital and senior living center.

Stepping into the space of Foote and Friends, the first thing you see are colorful, pastel-toned murals depicting kites, a fluffy gray dog and green leaves that fill the walls. The main workshop space has a large mural with a daydreaming child. The bright walls show some of the building’s history. A daycare previously filled the space of the building; now Dr. Sally Foote uses the space for Foote and Friends, a veterinary staff training business.

Foote has 30 years of history with Jarman Center. She and her husband, Tom Wold, purchased it in 1990 and redeveloped it into a senior living center. Originally, the hospital was built in 1918 and was named the Sarah A. Jarman memorial hospital. Several additions and reiterations have happened since, including the “new” hospital built in 1965. Some of the original red-bricked hospital still remains.

Foote and her husband sold Jarman Center to Chris Robinson in March. She said it was time for someone else to take over the building since she is nearing retirement age. Part of the deal was to let her rent some space from Robinson who is in the process of re-developing the building. He recently finished the first floor, which has been converted into office space.

“He loves this project, that right there says so much. It means there’s someone who is going to stick with it,” said Foote.

Foote sold her veterinarian practice, Okaw Veterinary Clinic, to Dr. Kyla Kuhns in 2018. According to her website, she wanted to follow her passion in educating vet staff and pet owners. There was also a need for other veterinary clinics to receive some extra training and support.

According to Foote, vet students don’t always receive the experiences to help them excel at their jobs while studying. Training usually happens on the job. Learning how to handle an animal with behavioral or other issues takes time and training, both of which can be hard to provide at times. Vet clinics face low-staffing issues like many other industries. Her in-person courses can help provide training and make it easier for “the nuances of doing it well – the art of it.” The small class size allows her to provide one on one coaching.

Foote gives speeches all over the country for veterinarians. She presents topics with an emphasis on low-stress treatment for animals. Last week she was in Michigan at the State Veterinarian Medical Association and next week she’s going to California Sage Group Corporation to speak.

Foote emphasizes low-stress and fear-free handling of animals. She is quite hands-on with her training methods; She set up a mock clinic in the Jarman Plaza to provide vets training in a space similar to their clinics.

Veterinarians aren’t the only ones who learn from Foote. She hosts workshops for pet owners in the area as well. The courses benefit both owners and the clinics they visit.

Foote just finished a four-week course for younger and older puppies. The class went over some basics like sit and stay but those aren’t the only things puppies should know. As a behaviorist, she is especially knowledgeable about socializing puppies and fixing behavioral issues like over-barking.

“Dogs can drop in at any week,” said Foote, “Otherwise, the problems get worse and harder to fix.”

She teaches a few things you might not expect you need; better interactions at the vet clinic during exams and a calmer stay in the clinic kennels. Animals recovering in the kennels can heal better since they aren’t as stressed out.

“I love doing it,” said Foote, “I felt strongly about bringing this to other clinics.”