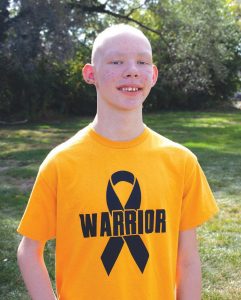 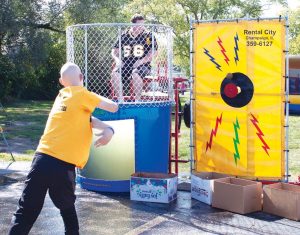 Colton Rahn throws balls to dunk Bradly Taylor during the silent auction held for him Oct. 9. Photo by Dominik Stallings. 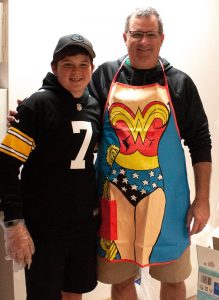 By Dominik Stallings
Colton Rahn’s family and friends hosted a silent auction Oct. 9, at the Tuscola Moose Lodge. They auctioned off items donated from all over central Illinois to help fund Colton’s medical expenses and weekly St. Louis trips for his newly diagnosed cancer.

Tami Bennet, Heather Madden and Christy Taylor organized the benefit for Colton. They set up a dunk tank, inflatables and a rock climbing wall.

First Mid Bank raffled off a basketball hoop during the event, but you could find all sorts of items at the auction. Handmade signs, signed autographs, brand-new Nike shoes and a large assortment of goods and decorations lined the walls inside the Moose Lodge. A spaghetti dinner was served as well.

“Everyone that has helped has been amazing,” said Katie Parker, Colton’s mother. His father, Jason Rahn said, “Support for him personally has been incredible.”

The fundraisers started earlier this year for both Colton and Dilynn Wilson, an eighth-grade student at East Prairie. Both children have to go to St Louis for treatment, Colton for chemotherapy and Dilynn for surgery on her legs. They’ve both grown up with cerebral palsy and shared similar experiences.

Several parents from the eighth-grade class and friends and family have supported both families by organizing several fundraisers. The events are usually held with kids in mind, having them participate and support the two as classmates. They’ve had bake sales at East Prairie Middle School. Students participated in “Hat day” where they could wear any hat they wanted, as long as they paid for it. Class teachers helped gather donations from their classes. They put together over $200 for both Colton and Dilynn. As a reward, Colton was able to smash chocolate pies in their faces.

Colton was diagnosed with cerebral palsy when he was eight or nine months old. Parker said she noticed that he wasn’t using his right arm and leg, and was worried. At first, she wrote it off as being a nervous mother, but she still took him to the doctor to get him checked out. She said that within two minutes of the doctors examining Colton, they diagnosed him and started therapy shortly after.

Parker said that Colton started “blanking out” when he was 2 or 3 years old but has received medication to treat it. Then, in march 2022, Colton had a seizure and was brought in to get blood work done. Parker said that the results were good. He seemed just a bit dehydrated.

During a subsequent visit to the neurologist’s office, Jason Rahn noticed a lump on Colton’s ear. At first, it seemed to be a harmless lipoma, a fatty lump just beneath the skin, but the family had it removed May 13. The following week they received a pathology report stating it was a malignant tumor. More testing followed shortly after. After a month, it was determined to be a rare soft tissue cancer, embryonal rhabdomyosarcoma.

“It’s been a very quickly rolling train since,” said Parker.

Parker said that things have been crazy and overwhelming since. They make weekly trips to St. Louis. Colton started 40-week chemotherapy June 23. Last Monday, Oct. 3, Colton had surgery to remove a tumor that had grown back. Tuesday, Oct. 11, he had a radiation consultation and the family hopes his radiation treatment will start this coming week.

“Treatment is really hard on him,” said Parker. “It’s hard for most adults to handle.”

Parker said that Colton is tired more often and has lost some weight. They’ve had some difficulties getting clothes that fit him better. Parker said that he’s still doing good despite those struggles.

“He knows he’ll make it. It’s a journey and we’re focusing on the end outcome,” said Parker. “The survival rates are good for this type of cancer. It’s just a long process to get there.”

In 2018, University of Illinois Football players Reggie Corbin, Del’Shawn Phillips and Justice Williams volunteered to coach flag football that Colton’s parents organized in 2017. His parents wanted Colton to enjoy his favorite sport safely. Jason Rahn said the team has grown each year. Now they have over 132 players.

Colton and his father, Jason, share a love for sports, especially football, and attend every Illini game possible. In 2018, they noticed the fan section wasn’t as full as it could have been and saw many unused tickets go to waste. So they started “ColtonsTickets4Kids” on Twitter. They took tickets from people who couldn’t attend and dispersed them to children who wanted to support the Illini but couldn’t participate. They have distributed over 1,500 tickets to children who wish to support the Illini. Colton was also surprised by Illini players at a biddy basketball game in 2017 when they paraded and cheered for him as he made a game-winning basket.

Some players wear bands with “Colton Courage,” a saying close to Colton. Jason Rahn said it came up when he asked Illini fans for support when Colton underwent eye surgery, which is risky for anyone with cerebral palsy. He said he woke up the following day with over 1,500 messages from fans, players and coaches. Parker said the players and coaches keep in contact with Colton, texting and calling him.

“Colton has always been a fighter. He doesn’t believe in giving up. You keep going until you make it, even when it’s scary,” said Parker.

Jason said that Colton has a new goal coming out of cancer treatment. He wants to be a punter for the Tuscola Warriors in the upcoming school year.