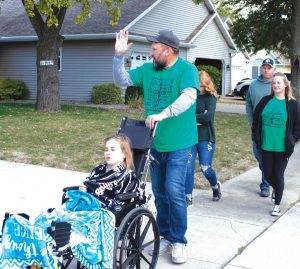 Dilynn Wilson is pushed by her father Josh Wilson during a walk while Kathy Wilson, Amy Wilson and Josh Cummings come along for the stroll Oct. 8. Submitted photo.

By Dominik Stallings
Dilynn Wilson, age, a student at East Prairie Middle School underwent surgery on her legs Sept. 21. Now she is recovering at home with her family. Some of the parents of the eighth grade visited the family Oct. 8 and gave them a check for donations they’ve received through fundraising.

Marla Vearil, one of the visitors, said, “ Your whole class loves you, and your whole community,”

Dilynn Wilson was diagnosed with cerebral palsy when she was about a year old. According to her mother, Amy Wilson, cerebral palsy mostly affects her legs and her brain sends out signals to her muscles to tighten.

She started therapy at Champion Physical Therapy and Performance at about a year old and later her parents switched her over to ATI Physical Therapy. Dilynn started crawling when she was 3-years-old and used a walker at four years to help her walk.

On and off throughout her life, she’s used bracers as a mobility aid. Physical therapy has helped her as well, but now as she’s growing, surgery became necessary. The surgery took place at Shriner’s hospital in St. Louis, where they did a number of procedures on her legs. They lengthened some of the tendons, and cut and re-adjusted some of the bones to better fit in their sockets. According to Josh Wilson, Dilynn’s father, the surgery was supposed to last seven hours but only ended up taking five. The family ended up staying in the hospital for three days getting very little sleep. Dilynn said the constant noise of the hospital and the machines attached to her kept her awake.

Amy said that the doctors predicted only a 0.05 percent chance of Dilynn needing any of the same repeated surgeries.

“So hopefully this is it,” said Amy. “We get through this and the therapy.”

Josh said that she will be in full leg casts until Friday, Oct. 14, and have casts below her knees for a few more months. Josh said that Dilynn will be able to walk again after the recovery period of several months with the help of bracers. After she stops growing, she should be able to walk without any sort of mobility aid. In addition, she will be able to stand taller than her physical therapists Jessica Ray, and Mandi Miller. Both have helped the family over several years and kept them on track.

“They’ve been so great with us,” said Amy.

The community supported the family with several fundraisers. Marissa Taylor reached out to the family in July, a few weeks after they scheduled the surgery for Dilynn.

“We didn’t know what to expect,” said Amy. “We thought it was just going to be a bakesale”

A bake sale evolved into full support from the community, not just for Dilynn. Colton Rahn, another eight grade student from East Prairie Middle School, also lives with cerebral palsy and was diagnosed with embryonal rhabdomyosarcoma, a rare form of soft tissue cancer commonly known as RMS. Taylor was joined by other eighth-grade parents and has helped fundraise for the children. The parents placed a lot of importance on participation from their classmates.

Kelly Engelhart, one of the parents who Downtown Design created and donated T-shirts for the eighth-grade kids. The shirts have both of the kids’ names on the front along with words to describe them, all chosen by their fellow classmates. Dilynn said she’s grateful for all the support from her class and community.

“School has accommodated her in any, way, shape or form,” said Amy.

The school donated over two hundred dollars to the children, after letting Colton throw pies in some of the teacher’s faces during homecoming.

The family has also received support in the past, before they knew she needed surgery. Josh and Amy recalled the time Dilynn scored for the soccer team. The team helped her kick the ball and brought the whole crowd to tears when she did.

The First Christian Church also helped out the family and built them a ramp for Dilynn’s wheelchair. Josh said that Tim, Adam and Josh Seip helped build the ramp. They have also received a wheelchair from their church as well.

The family said that ATI Therapy donated an adult-sized stroller to them, which has helped Dilynn be more mobile. A huge help to the family.

Dilynn has a large personality, she’s sassy with her family and sometimes even with the nurses. She also has interests in YouTube and medical shows. Her family said that she would tell the nurses some medical terms, amazing the team. Josh said that she challenged and beat high school kids to planking competitions while at physical therapy.

Josh takes Dilynn out on walks around the neighborhood. It gets her out of the house and some fresh air as well. She often criticizes his driving through the cracked sidewalks in town, but she enjoys the time spent outside as well.