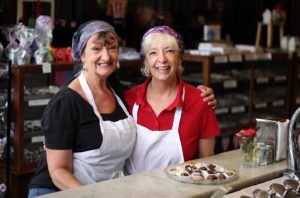 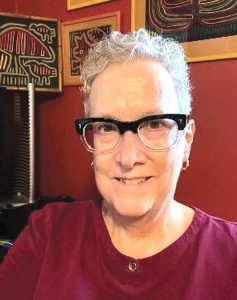 The three Hall of Fame inductees—Cynthia Gates, PhD (Class of ‘72), Ann Flesor Beck, PhD (Class of ‘72), and Devon Flesor Story (Class of ‘80)—will be honored at the Alumni Association’s luncheon at 11:30 a.m. at the Methodist Church, 901 N. Prairie, Tuscola. The event will take place during Homecoming weekend on Saturday, Oct. 1, 2022. The event serves as a fundraiser for the alumni association, the other fundraiser is the All-School reunion on Sept. 30, at the community building. The Alumni Association is a 501c3 non-profit organization. Any donations made to the organization go towards scholarships to students and homecoming events.

On November 16, 1962, I was born in Hanover, Pennsylvania to Margaret Elizabeth (Betty) and Paul G. Flesor. I was two weeks late and have been running late ever since.

Our little family moved to Tuscola a few years later to join our Greek immigrant grandfather Gus in the family confectionery business. He was REALLY old by then and needed our help. My sister Ann (husband Roger), brother Scott (wife Tracy), and I were “raised” in the store. It was at the center of our lives, and we couldn’t wait to grow up and do anything besides scoop ice cream, make candy, package candy, sell candy.

Both fortunately and unfortunately, I got my chance to escape the candy store life when my parents went out of business during my early high school years. Those were tough times, but I emerged stronger and made a beeline for Eastern Illinois University, the best “cheap” yet good college close by. In fact, Eastern became what I call my personal one-room schoolhouse. I earned a couple of degrees in the English Depart ment and then somehow ended up teaching there for sixteen years. I loved it.

In 2003, Ann talked me into quitting my perfectly good job (summers and holidays off, “government check,” good benefits) to go into debt and return to hard labor. We reclaimed our family’s now trashed-out building and in 2004, after 18 months of renovation, Ann and I reopened what we now call Flesor’s Candy Kitchen on the corner of Main and Sale in Tuscola. We’re proud of what we accomplished.

A few months ago Ann retired and my husband Robert (Bob) Story and I took over ownership and operation of the business. We’re not young, but we’re determined to carry on the family tradition. Thank God we have a great staff and supportive customers!

Like my parents, I raised three children in the store: Nicholas Moore (Ruriko), Sendai, Japan; Alexis Nau, Chicago; and Paul Nau, Tuscola. I am happy to report that Tuscola public schools along with their independent studies, prepared my children well for university coursework.

When I’m not at our store, I’m reading a book, weeding the garden, or browsing in some junk shop. I sing a lot. And I love a cocktail or three on the patio after work. Life is good.

Thank you for choosing my sister and me for the TCHS Hall of Fame. I was a completely out-of-control high school kid, so the honor makes me giggle a bit. I tell people that I’m making up for the sins of my youth every day I work at the Candy Kitchen. So true. So true.

Ann Flesor Beck spent her later childhood and teen years in Tuscola, enjoying small town life. “I learned about being a good neighbor, how to be in business, and what makes a thriving community.” After spending a few decades in Iowa and Connecticut, Ann returned to central Illinois where she completed her graduate work at the University of Illinois, earning a Ph.D. in education. Her book, Sweet Greeks: First-Generation Immigrant Confectioners in the Heartland is an honorific to her grandfather, Gus Flesor, and a tribute to the first-generation Greek immigrants in Central Illinois. Ann joined her sister, Devon, in reestablishing Flesor’s Candy Kitchen in 2004. “We appreciate the initial and continued support of the City of Tuscola and the many customers, old and new, who welcomed us back on the corner of Main and Sale Streets. It has been a true labor of love!”

Ann recently retired from Flesor’s, leaving Devon and her husband to carry on the tradition. She continues her global travels and volunteer work with international and local programs for women. “Thank you for the honor in representing Tuscola.”

As a kid growing up on the family farm, I was immersed in a setting that nurtured my curiosity in the natural world. My parents, Gaylord and Rowena Gates, and my older sister and brother, Julia and Mark, encouraged my keen interest in things scientific. I loved our set of encyclopedias and pored over the chapters on human anatomy. I was always on hand to watch my mother pluck and gut a chicken for Sunday dinner because the innards fascinated me. Mom recalls when I was 6 years old, she found me sitting on the living room floor trying to read about human evolution in Julia’s college level biology textbook. I also drove Helen Whalen (my first grade teacher) nuts with my dinosaur obsession to the point where she asked, “Cindy, do you want to teach this class or should I?”

So, I knew from a very early age that I wanted to be a scientist. The support from my family and my education in the Tuscola public schools laid the foundation for what would become a career as a scientist. It was a given that I would take biology, physics, and chemistry classes at TCHS. Anita Brown (biology) and Kay Kleiss (physics, chemistry) were marvelous teachers who gave me a leg-up when I enrolled at the University of Illinois-Urbana after graduation from TCHS.

However, as a freshman, I had no clear idea of what kind of scientist I wanted to be, so I defaulted to a pre-med biology major. That was an impersonal, often cutthroat, major with large classes, and I did not thrive in it. I changed majors to architecture for a while, but the life sciences called me back, and I chose a major in botany. However, I wasn’t sure if I wanted to be a botanist out collecting and classifying plants or something else.

A class in plant natural products chemistry awoke my interests in biochemistry and advanced organic chemistry bigtime. After spending the summer of 1977 at the Marine Biology Laboratory in Woods Hole, MA, I returned to Illinois to work as a research associate in the plant pathology department at the U of I while strengthening my chemistry credentials. The interactions of small molecules with enzymes and receptors in the human body fascinated me. I knew that I was on the path to becoming a drug hunter.

In 1979, I married my husband, John van Melle, who grew up in Homewood, IL. A year later, I was accepted into the University of Wisconsin-Madison’s School of Pharmacy in the pharmaceutical biochemistry doctoral program, so we moved north to Madison, a beautiful city. There I experienced intensely competitive classes along with the frustrations of failed experiments and the rewards of those that were successful. I worked hard, often spending weekends and late nights in the lab, but it was an incredible education. I made lifelong friends while in grad school, and I was exposed to an amazing diversity of people.

I defended my doctoral thesis in February of 1986 and almost immediately started my post-doctoral work in the UW-Madison Biochemistry department. In addition to my academic accomplishments, John and I welcomed our son, Marc, who was born in 1987. I also made the decision to pursue a career in the pharmaceutical industry.

My career in pharma research started with my first “real job” in 1988 at Merrell Dow Pharmaceuticals in Cincinnati, OH where I became a senior scientist in the chemistry department at Merrell Dow, which became Marion Merrell Dow (MMD) after a merger. After 9 years at MMD, I joined Vertex Pharmaceuticals as a senior staff investigator. My family, which now included our daughter Laura, moved to Cambridge, MA in 1998. I had the most rewarding experiences in pharma research at Vertex and truly fell in love with the Boston area. A friend described me as “a Douglas County Yankee in Ted Kennedy’s court.”

In 2004, Bristol-Myers Squibb (a “Big Pharma”) lured me away from Vertex to become the department head of a group of 12 biochemists. We then moved from Cambridge, MA to Princeton, NJ. My job at BMS became less scientific and more about counting “metrics” and all that comes with “people management.” I was unhappy in that role, so during a period of lay-offs, I raised my hand for voluntary severance. I then had the luxury of 6 months to think about next steps. I decided to pursue a longtime interest in drug development (the “D” of research and development/R&D).

I landed a job at Biogen in the medical writing department, so we moved back to Boston in 2010. At Biogen, I have focused on neurology/neurosciences and late-stage drug development. Neurology is an especially challenging and risky therapeutic area in which there have been many more failed drugs than successes.

Drug hunting is hard work. The research and development process includes creating and identifying a drug, performing preclinical and clinical studies, and receiving marketing approval after its regulatory review. This process is associated with an extremely low success rate, about 1 compound in 20,000 to 30,000 drug candidates. Additionally, the clinical development of a candidate compound, from the start of a clinical trial to marketing approval, has a low success rate (10% to 20%) and requires a huge investment that continues increasing year by year.

Because of these long odds, many scientists in pharma R&D may never see a drug they have worked on become a marketed product for patients. I have been fortunate to have been a team member for 3 programs for which a clinical candidate went on to be approved for market: the compound I worked on at Vertex (a hepatitis C drug), and as a medical writer at Biogen, Tecfidera and Zinbryta, which were approved and marketed as drugs for multiple sclerosis. More recently, I have been the medical writing submission lead for tofersen, a potential new drug for a genetic form of amyotrophic lateral sclerosis. This submission is currently under review by the FDA.

In addition to my career in pharma R&D, I am an advocate for scientific literacy and equality in the sciences. When I was in grad school, there were very few women and minorities in my particular discipline. I was the only woman with a PhD

in MMD’s chemistry department. As a result, I volunteered to speak to high school students in the Cincinnati area to raise awareness among young women and minorities that STEM fields could be a challenging, but rewarding, career path. While in Cambridge, I was actively involved in Marc and Laura’s school in the Cambridge Public School system, which included helping out in their science classes and chaperoning field trips to science-oriented activities at Harvard and MIT. Now, I advocate for alternative career paths in the sciences. It’s not all about bench work in an academic laboratory.

The pharmaceutical industry has changed in the years since I started my career in 1988. Without a doubt, many new drugs have made dramatic differences in patients’ lives, but cost and equitable access to these drugs are a challenge. The pharma industry, which was admired when I started my career, is now often vilified, and not without reason. However, please know that the scientists like myself in pharma R&D are committed to the discovery and development of life-changing drugs for patients. It’s not about the money or glossy advertisements for us. I’m proud of my accomplishments in pharma and grateful to my family, friends, and the TCHS system that provided the foundation for my career.