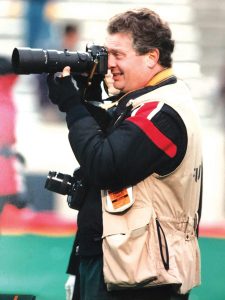 Photographer Mark Jones is pictured at Memorial Stadium in the 1980’s, shortly after beginning his career with U of I Athletics. Submitted photo. 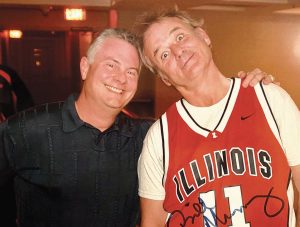 Mark Jones is pictured with comedian/actor Bill Murray, taken in 2005 during the Final Four in St. Louis. Photo by Shawn Wax.

If a picture is worth a thousand words, well, let’s just say that photographer Mark Jones of Arthur would never have to speak again. But thankfully, he is not heeding that adage and will serve as guest speaker for Tuscola Community Foundation’s 2022 annual reception, taking place Tuesday, Oct. 4 at Ironhorse Clubhouse in Tuscola.

As chief varsity sports photographer for the University of Illinois, Jones enjoyed a front row seat to Illini action and adventures for 34 years, retiring earlier this year. Jones credits Kent Brown, who gave him his first photo credential for an Illini football game in 1988, with launching his collegiate sports photography career. That trial run, to see if he had what it took to become a recurring (and ultimately chief) sports photographer, was an unqualified success. Jones would go on to work with student-athletes, head coaches, administrators, staff, and more within the Division of Illinois Athletics—primarily with Illini men’s football and basketball.

Jones’ artistic endeavors weren’t limited to the sports realm. You probably also know him as owner of Tintype Shoppe in Arthur, which is still in operation today. His love of photography began in his teens, when he would spend untold hours in a homemade darkroom in the basement of his family’s farm located just south of Atwood. That passion led Jones to SIU Carbondale, where he majored in cinema/photography, graduating in 1973. Afterwards, he and wife, Beth, returned to Arthur to establish Tintype, and he became a much sought-after commercial photographer.

But Jones had yet another area of his craft he wanted to further pursue, and whenever possible would attend professional workshops concentrating on fine art photography. It was through these events that Jones became acquainted with and was mentored by renowned photographer Ansel Adams. Their friendship and collaborations continued until Adams’ death in 1984.

We look forward to hearing Jones’ tales from his varied and successful photography career at the upcoming reception. Guests who have reserved their spot will be treated to cocktails and appetizers while they enjoy Jones’ presentation and learn more about the role Tuscola Community Foundation plays in the betterment of Tuscola and its citizens.