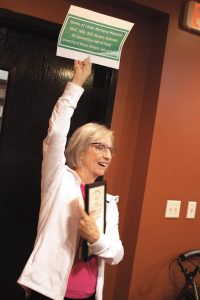 Linda Metheny Mulvihill holds up a piece of paper Sept. 24 which describes a sign dedicated to her. Photo by Dominik Stallings.

By Dominik Stallings
Tuscola local Linda Metheny-Mulvihill joined the University of Illinois’ Athletic Hall of Fame Sept. 23. Through a mayoral declaration, the City of Tuscola declared Sept. 24 to be “Linda Metheny Mulvihill day” in honor of her achievements as an Olympic athlete and Tuscola ambassador. She will also receive a sign on U.S. Rt. 36, which reads “Home of Linda Metheny Mulvihill.”

Metheny received the proclamation from Mike Carroll and another award from Max Albritton during a class of 1965 Tuscola High School reunion. Albritton’s gift to her was an award to the Class of 1965 Hall of Fame. A personal award to her for being an influential member of the class. Metheny graduated Tuscola High School in 1965 and graduated as a James Scholar at the University of Illinois with a bachelor’s of arts and master of arts in fine and applied arts in 1969.

“It’s amazing to me that Max Albritton keeps the class united,” said Metheny. “I appreciate the support of my hometown.”

The Hall of Fame celebration in Champaign inducted 14 other members, with athletes and coaches from football, basketball, soccer, swimming, golf, softball, wrestling and track and field. The ceremony was a special one, in tandem with the 50th anniversary of title lX, four of the athletes were associated with the university before title lX existed. Metheny was one of those four athletes. Title IX protects people from discrimination based on sex in education programs or activities that receive federal financial assistance.

Metheny has a long career, which started in Tuscola with one influential figure in her life, Peg Pettit, who coached Metheny and several other children in acrobatics and ballet. Metheny recalled begging her mother to let her take part because she wanted to be involved in the sport.

“I felt it in my soul, that movement was important to me,” said Metheny.

Metheny learned everything she could from Pettit, who recognized that Metheny had stretched the limits her coaching, so she took Metheny to Champaign to train with Charlie Pond, a coaching legend at the University of Illinois. He usually trained men in gymnastics, but back in the day, had a club where he trained boys and girls how to tumble.

It wasn’t much longer until Metheny went to the Olympics for the first time. What’s more unusual, she went while she was still in high school. She made the Olympic team as a junior at Tuscola High School and later went to the 1974 Tokyo Olympics as a senior and all-around competitor. She also went to the Olympics in 1968 in Mexico City, and 1972 in Munich.

Over her career, Metheny became the first American woman gymnast to make the Olympic Event Finals, with a best finish of fourth place on the balance beam in 1968.

She also won seven gold medals at the Pan American Games in 1967 and 1971. She was the National Elite All-Around Champion five times, which were held by the Amateur Athletic Union and the United States Gymnastics Federation. She competed as the only member of the women’s gymnastics team in the era before AIAW and NCAA Competition. In total, she’s won at least 18  national titles. Metheny retired from competition and began coaching in 1973 and opened the National Academy of Artistic Gymnastics. The academy has trained 17 Olympians and 75 national champions since then.

She co-coached both American and foreign gymnasts who made 1976, 1980 and 1984 Olympic teams. She was named the USGF Choreographer of the Year in 1989.

Linda Metheny has three children with her husband Dick, Dani Jo, David and Matthew. All three of them are gymnastic athletes but then went into diving, baseball and soccer, respectively.

“You have to have a passion and love for what you’re doing. Whatever it is.” said Metheny, “ You have to keep thriving to appreciate the struggles and the triumphs of the journey so you can look back and realize it’s what you wanted to do.”