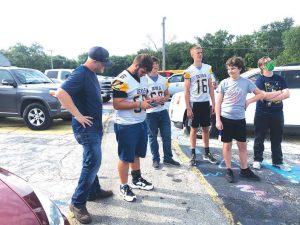 Students got to see how the local farmer uses UAV technology for agriculture and were able to participate as well. She had them fly smaller, cheaper drones. These drones don’t possess the same sort of data-capturing capabilities as Hettinger’s high-tech, data-capturing UAV, but they could still take photos and video footage. The students created short promotional clips for Villa Grove, where they showed off the football field, the award case in the school and much more. Parr presented some of them to the Villa Grove School Board Sept. 19.

Parr said she wants to help her students find clear career paths and hopes that doing these kinds of exercises help with that.

“We’re trying to do the best we can with what we have in front of us and continue to push the envelope,” said Parr.

Hettinger said he’s trying to reach out to younger kids and make a bigger effort to educate them and get them excited about FFA and agriculture.

“I don’t think younger generations realize how cool agriculture is nowadays,” said Hettinger. He said that he himself didn’t originally plan on going into agriculture, instead opting to go to school for audio engineering. However, his father, Steve Hettinger, showed him how much robotics and technology take place in agriculture nowadays and won over his son.

Hettinger uses precision agriculture for Hettinger farms but is also branching out to educate other local farmers by partnering with precision planting, a company that produces equipment used in precision agriculture. Hettinger said they stay up-to-date on the latest technologies and figure out what works and sell it to other farmers. One of his daily use tools is a small UAV which he uses for scouting the fields, checking for wind damage and recording any issues with the plants. This helps with insurance as well, as the recorded damage can be calculated exactly and reported to insurance companies.

“I think every farmer should have one of these in their pick-up truck,” said Hettinger.

Hettinger said the technology used has far more applications than just photos. A more advanced drone can cover 600 acres in about 30 minutes. During that time, it takes high-definition photographs and creates a panorama where you can zoom in on individual leaves.

Hettinger showed on a computer screen how the data collected can be translated to show which plants are unhealthy through infrared imaging. He can also get elevation data, and see how the field drains water.

He said all this technology makes farming easier and more efficient and helps protect the environment. Especially when it comes to using fertilizer and other chemicals, since they can use technology to target specific plants, instead of an entire field.

Hettinger farms plans on doing donations for local FFA chapters soon. He said that when they measure farmer’s meters in the winter, they will donate $5 to FFA chapters for each meter measured this way. He said the donations will go out in the spring of 2023.

Parr’s students will go to a drone competition in the spring, which includes a career fair focused on precision technology careers.

Parr said that her students will have an agriculture field day on Oct. 6. Her FFA kids will put on a six- or seven-part field day for the elementary school. She said this year they are going to focus on pumpkins and learn about the history behind them. The elementary kids will also meet barnyard animals.