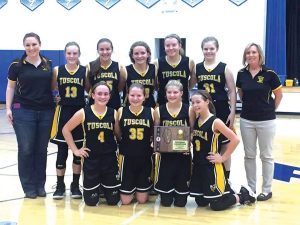 Pugh has a long history with Tuscola and also with sports. In high school, she played not just a variety, but almost everything a school can offer for sports.

“I played all the sports, volleyball, basketball, track, softball– everything,” said Pugh.

Pugh first went to Parkland College in Champaign and graduated in 1982. She later graduated from Eastern Illinois University in 1984 with a degree in physical education. Pugh started coaching girls’ volleyball, basketball and track in Tuscola in 1984. She then landed her first teaching job in Cerro Gordo in 1988. She said she helped the girl’s basketball team win their first conference tournament there.

In 1992 she started teaching P.E. and health in Tuscola and stayed at the school until the spring of 2022 when she retired. She also worked as athletic director for junior high. Pugh said she’s lucky to have had the opportunity to get to know students, parents, teachers, officials and fellow coaches during her career. Since she’s been at the same school for so long she’s been able to experience generations of families passing through the school.

“I’m still very, very, fortunate to teach and coach in my hometown,” said Pugh, “I’ve coached the daughters of mothers that I coached and aunties and uncles.”

Pugh has a long track record of winning basketball games. She brought 644 wins to the table for Tuscola and only 319 losses. She’s taken three different teams to state as head coach and twice more as an assistant coach. Pugh is no stranger to winning conference tournaments either, winning those 13 times, while gaining 14 conference titles and 10 regional tournament titles.

One of her most memorable games was the eighth-grade basketball team beating Paris Mayo in 2017. The game against Teutopolis for the sectional title in 2018 was also memorable, even though they lost by only four points. She said there was a packed crowd in the Tuscola gym and it was one of the greatest sports atmospheres she has experienced at the junior high level.

Outside of school, Pugh is just like many parents in Tuscola. She likes to be with her friends and socialize, but she also likes to take it easy and have casual cookouts. Of course, she likes to exercise as well.

“I gave up high school girls basketball because I started having kids and I wanted to spend more time with the family,”

Pugh has two children, Kyle and Dylan Pugh. Since her husband, Mark, was also working, her children stayed at every practice with her. Kyle ended up falling in love with it. She hopes to travel more often to Kansas to catch up with her son, Kyle Pugh, who has followed in her footsteps, coaching basketball in junior college in Concordia, Kan.

Officially Pugh is retired nowadays, but that hasn’t stopped her from being with students and participating with the Tuscola School District.

“I did retire, but I miss the kids and miss what I do, so I came back and helped.”

Of course, she isn’t performing her previous duties. Pugh now helps the school as a substitute and a teacher’s aide. In addition, for the first time this year, Pugh is coaching the high school girl’s cross country team.

This year, Pugh will be the homecoming parade marshall, leading the parade.

“I was really humbled, Growing up watching the homecoming parade all my life. Humbled and shocking at the same time,” said Pugh.

Katie Wienke and Johanna Steffens, co-sponsors for homecoming, spoke about why Pugh was selected. Steffens said they honor retired teachers with the parade marshal title, but Pugh is also a graduate and alumni, making it a special occasion.

“We were thrilled this year to have Beth be chosen by the selection committee,” said Wienke, “Because of her dedication to the district and community – her entire life.” Steffens said, “It’s a true homecoming parade where people come back to visit and celebrate our community and schools.”