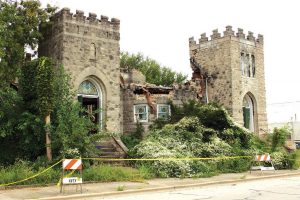 The now overgrown “Castle Mall”  building stands on 202 South Main street in Tuscola. It burned down on July 9 in a suspected arson case. The building was formerly a Presbyterian church. Photo by Dominik Stallings.

By Dominik Stallings
The City of Tuscola, represented by attorney Andrew Bequette, filed a complaint against the owners of the “Castle Mall” because of the unsafe and dangerous condition it is in following a fire there July 9. The first court hearing for the case was set for 11 a.m. on Oct. 7.

The building was destroyed by fire July 9 but the stone outer walls remain. The complaint states that the defendants failed to repair or demolish the premises within 15 days of being served a notice of intent Aug. 3.

According to Bequette, the city plans to ask the court to authorize them to demolish and clear the lot.

Bequette said, “The city continues to hope that the owners will resolve the situation.” He said the city would drop the lawsuit if the property owners notify them of plans to remove the building.

If the city is authorized by the court to demolish and clear the lot, the city would then place a lien on the property. A lien is a claim on the property for the cost of removing the destroyed building. 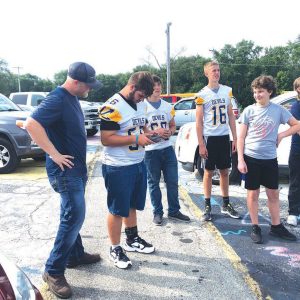