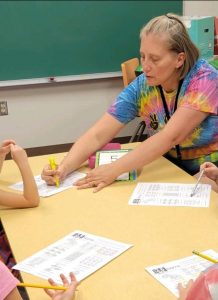 By David Porter
Negotiations between teachers’ aides and the Tuscola school district have reportedly stalled leading to federal mediation, according to a press release from the newly formed Tuscola Education Support Professional Association (TESPA), which represents the aides, officially known as paraprofessionals.

The top priorities for the aides are wages and working conditions, according to Rachel Haste, a long-time paraprofessional at North Ward Elementary School. Of the 20 aides working in Tuscola schools, six have been there more than a decade, and two have been employed there for more than 20 years. The average wage is $14.21 per hour, which Haste said is less than the average for fast food workers in Tuscola.

Haste said she thinks a lot of people think of aides as merely playground and cafeteria attendants or helpers during drop-off and pick-up of the students. Or they think of aides as clerical staff running copies and laminating papers for teachers. They do all those things but much more, she said.

Students with an individualized education plan (IEP) often have an aide assigned to them. Some have behavioral problems, autism or physical disabilities. The aide stays with them throughout the day, getting them to their in-school appointments with professional services, such as speech therapy, occupational therapy and physical therapy. They work directly with students, either one-on-one or in small groups, to supplement classroom lessons and reinforce therapies. They also administer individual testing, and some students need help using the restroom.

Some of the aides are trained to work with students who become violent and may harm themselves or others. Haste said she has been injured twice by students to the point of needing medical attention. Many of the teachers do not have therapeutic crisis intervention (TCI) training and rely on the aides to handle those situations. Most principals and social workers have the training, which includes a week-long summer class, she said. But only a handful (three to four) teachers at North Ward are trained, she said.

Most of the training is on how to de-escalate a problem, Haste said. But if a student must be restrained, the adult doing it must have the TCI training with recertification annually. Aides also must be certified by the Illinois State Board of Education, she added.

“Paraprofessionals work with the most vulnerable students in our schools and help teachers, assisting students with IEPs, behavioral challenges and those with autism and other disabilities,” Haste said in a press release from the union. “Paraprofessionals also supervise the homework club, which helps students who are failing, or at risk of failing, classes.”

The aides voted for union representation last year after two paraprofessionals were hired at a higher wage than aides who have been with the district for years, Haste said. Retention has been a problem, she said; the district benefits from people who have years of experience and training. In the last two years, 40 percent of the aides have quit, she said, either to go to another district or for higher pay outside of education.

She added that there is no comprehensive job description or training for aides. Newcomers rely on aides that have been there for a while to learn what the job entails. There are 20 aides working in the district; 14 at North Ward, three at the middle school and three at the high school. That includes aides at each of the school libraries. There are four unfilled paraprofessional positions, Haste said.

Haste said the aides were surprised when the School Board requested mediation but are hopeful that it will help the two parties reach an agreement. Any recommendation by the mediator is not binding, she said, but that person will act as a go-between during negotiations, which are set to resume Oct. 11. The parties have been negotiating since Feb. 10.

Haste said she attended negotiations between the teachers and the School Board and that she thought the Board treated the aides as “less than.” She said she thinks some of the Board members view the paraprofessionals as less important and may resent the fact that they formed a union. She said the paraprofessionals’ union plans to merge with the teachers’ union at some point.

Haste said there have been some “rough nights” but also nights when the two sides were “able to talk some issues through.” She said she thought some of the Board members were not previously aware of everything the aides do and were genuinely surprised.

One of the sticking points in negotiations for the paraprofessionals, Haste said, is a scale to reward aides who have stuck with the job. She said the district needs highly skilled and motivated paraprofessionals and fair wages for seasoned employees. She said the district proposed wage increases in five-year increments. Teachers are given “step increases” annually for their first 20 years of service.

Haste said the aides already had health insurance, retirement benefits and time-off benefits. She said they don’t want to lose those things but that they are not really an issue for the negotiations.

“We’re asking to be fairly compensated for the good, hard work we do every day,” Haste said. “We know the district has the funds to meet this request without raising taxes. It’s the right thing to do for our schools and our students. … Due to the high turnover rate, new paraprofessionals do not have the training and experience to successfully handle education support and behavioral situations. This means our students lose. Still the Board is proposing to not pay employees for each year of experience they gain in the district, which will only mean we lose more talented paraprofessionals to other districts and professions.”

Haste said the social-emotional needs of students have grown over the last few years, a sentiment heard nationally since the start of the COVID-19 pandemic. The need for highly qualified paraprofessionals has increased, she indicated. Yet, many of them have side jobs and find summer jobs to help make ends meet. “It’s not a living wage,” she said. “We need to do better.”

School Supt. Gary Alexander released the following statement Monday: “The Tuscola Board of Education cannot comment on the negotiations with TESPA.  This is due to the ground rules set forth and agreed upon by both The Board of Education and TESPA.  Once we enter into negotiation with a mediator, we will make a comment.”