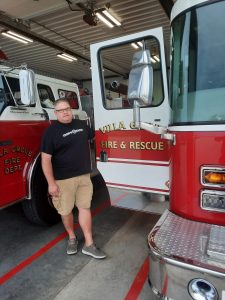 By Tony Hooker
It’s not an overstatement to say that VGFD Chief Chuck Black has firefighting in his blood.

In fact, he got his start as a firefighter at the insistence of two of his uncles, who were volunteers with the Pesotum department.  I recently caught up with Chief Black to discuss the importance of his department’s participation in Villa Grove Ag Days, along with many other things.

Chuck, how long have you been a fireman?

What drove you to it?

I had a couple of uncles who were members, and they said since I was going to stick around and go to Parkland that I should come up and join.

I was always around it, but I never thought about being a fireman.

How long have you been involved here at Villa Grove?

How much has it in the 26 years since you’ve been involved?

It’s changed a lot.  A lot for the better.  We’re much more safety oriented.  Looking down the road, there’s a lot more research into cancer in firefighters and safety.  Communications and nation-wide standards have all been established.

How long have you been chief?

What’s been your biggest challenge?

Recruiting help. Keeping help, keeping active help and keeping up on training standards has probably been my biggest challenge as chief.

To that end, you’re going to be participating in Ag Days in a couple of weeks.  What’s that all about?

The guys have set up a junior combat challenge, where the kids will get to use real tools and real fire hose.  Pat Lake and the guys have really gone overboard with this, in a great way.  It really draws the kids.  We’ll also be helping out with the demo derby, and with anything else we’re asked to do.

Is there a registration for the combat challenge?

It’s just walk up.  First come, first served.  I think we’ll be at a different location this year, maybe Main and Jefferson, but I’m not sure.

Do you see this as a recruiting tool, or is more of an opportunity to give back to the community or a little bit of both?

It’s definitely a recruiting tool.  We’ve had an explorer program for years, and I think that some of the kids that take part in the combat challenge and other activities, along with their parents, will remember that and might have an interest sparked.

How many active firemen do we have right now?

Our full roster is twenty.  That’s the goal.

Anyone who has any interest should reach out to you?

Yep, and it doesn’t matter what their background is, either.  We’ll take anyone who’s willing, able and healthy.  There’s work for everyone.

You have a good support team in place, right?  Who are your officers now?

We’ve got assistant chief Chris Elston and Captain Pat Lake and senior lieutenants Bill Mitsdarfer, Ben Brown and Derek Rasmussen.  Everyone is passionate about it.  When we’re up here, it’s for one reason, and that’s to help our community.  It’s all business when the pagers go off.

How can the community help you out?

Just be mindful.  If you see us coming down the road or see a volunteer with the blue light on, pull over.  Come out and support us if we ever have fund raisers or anything like that.