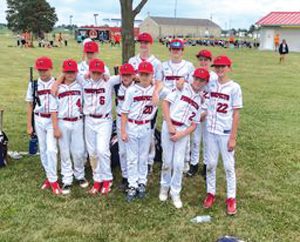 By Tony Hooker
For over forty years, Jerry Reeder has been sharing his knowledge of sports and his philosophies of life and moral growth as a coach. His most recent coaching venture is the Illinois Prospects Baseball Club, a youth baseball team consisting of young players from our area. I caught up with the coach to discuss the team and much more.

What baseball team are you affiliated with?

I’m with the Illinois Prospects Baseball Club. I started the club, and this is our third year of playing ball.

How did that come about?

I spent about four decades in the coaching profession, and I retired two years ago this August. I decided I needed to do something besides laying around on the couch so my wife and I and my niece and her husband started the organization for youth baseball, here in central Illinois.

Where is your home base?

It’s in a little town called Ivesdale, in southern Champaign county. That’s where my wife and I live. It’s about 4 miles from the farm I grew up on, and the Village of Ivesdale has allowed us to use their park, and it’s a really, really nice facility for baseball. We play our home games there. We have boys from all around central Illinois on the team, but that’s our home base.

What ages are these young men?

We started when they were 11, and this is our third season, so they’re 13U this year. We played 11u, 12 u and this year, they were 13 and under. We only have one club, we’ve thought about adding other ages, but right now, we’ve just got the one team.

You’ve coached about every sport, haven’t you?

<laughs> Yeah, but I’ve probably spent the majority of my time coaching baseball. After I finished my master’s degree at Illinois, I was on Itch’s (former Illinois Baseball Coach, Itch Jones) staff for two seasons, and then I got my first full time coaching job at the University of Evansville, in the Missouri Valley Conference. Back then, Wichita State and Creighton played in the MVC, and it was one of the premier college baseball conferences in the country. That’s where I really got my grounding in coaching baseball. Along the way, I coached some high school football and a little dab of college football too, but most of my experience has been with baseball.

They’re all baseball players, but what’s the main difference between coaching a 13u team and a college team?

Ironically, the skill development is the same. That’s what’s unique about the game of baseball. What you teach a 13-year-old as far as hitting, fielding and throwing, is the very same thing you teach a collegiate player, whereas in football, because of size and maturity, there are obviously things you can do as a college player that you can’t as a 13-year-old. Baseball is different. The skill part of it is the same. The same things you’re teaching a 13-year-old are what you’re teaching a college player, or even a major leaguer. What we try to do is teach those kids the skills that they’re going to need throughout their career, no matter how long they continue to play.

Did you coach any pro’s?

I did. In fact, I’ve still got one kid who’s playing in the major leagues. Lance Lynn played for me. He’s the last one. I had two others who played, but they’re out of baseball now. Jamey Carroll, who started with Montreal but then played 13 years with the Rockies and was probably the player I coached who had the longest career in the major leagues.

Without getting into specifics, can you see some of those traits in these kids you’re coaching now?

Yea, we’ve got a couple of kids that have the physical makeup and talent to play a long time. They can play beyond college ball, but the thing that people don’t understand is the mental part of the game of baseball that a lot of kids struggle with. It’s the only sport where you can fail seven out of ten times and still be in the hall of fame. Dealing with that amount of failure is something the majority of kids can’t deal with. I’ve had some kids who were high draft picks who didn’t last in the major leagues because they couldn’t handle failure. I can’t really say if these kids have the proper mental makeup to deal with that amount of failure and still come through on the other end. That’s part of the growth aspect of the game. We’ve got some really talented kids, so we’ll see.

We did. We finished with a tournament in Mt. Zion and had a real good end to the season. We beat a AAA team (the Illinois Black Sox) 9-0. In fact, a Villa Grove kid (Zane Hosler) went out and threw a one hitter against them.

Since your kids age out, you have to constantly be recruiting I assume?

We have three kids whose birthdays are late enough that they’ll be able to play another year with us, even though they’ll be freshmen in high school. We will probably have to add three kids to the roster for next year, and then expand the roster when those three come back from their high school season. We are really conscious of these kids not being overplayed. For example, if one of our kids goes out and throws 75 or 80 pitches, we’re not going to have them playing third base the next day. We take the health of these kids very seriously.

Are you going to have tryouts?

We’ll have tryouts the 12 through the 14 of July. We’ll probably add two pitchers and a catcher.

When will preseason practices begin?

We start workouts in January. The Arthur Christian School allows us to use their gym, and there’s a hitting facility in Tuscola that we use, so we’ll alternate between them. We try to do that until we can practice outdoors, depending on weather, and then we’ll play our first game in April.

How much travel is involved? Do you play all over the Midwest or is it more regionalized?

It’s more regionalized. There are some teams that travel a lot, but we don’t. We try to keep travel expenses down for the parents. We have two what we call “overnight tournaments.” We went down to St. Louis and played a tournament down there and took the boys to a Cardinal game, and then we play in a tournament in Springfield that we consider to be overnight games. The other tournaments are all local. We play in Rantoul and Mt. Zion, and we host two tournaments of our own. We play in six tournaments, but only stay overnight at two of them.

Is there anything that I missed?

There is. This is something that is really important to me. I spent the last 8 years of my coaching career off the field as the team chaplain. I was the chaplain for Eastern Illinois Athletics for 5 years, and then I was chaplain for the University of Illinois athletics for 3. We have that same spiritual aspect with this Prospects baseball team. We hold baseball chapel, a nondenominational Christian service, every Sunday that we play. It’s not mandatory, but we make it available for the kids every Sunday that we play. It’s for the kids, their parents, their friends or anybody that wants to attend. That part of it is really important to me. How these kids come into this organization and how we can grow them into young adults mentally, emotionally and spiritually means as much to me, if not more, as how much we can grow them as baseball players. It’s a unique aspect to what we do, and it’s something the families have really embraced, so it’s really a joy for me to be able to add that spiritual influence in the lives of these young guys. Every major league team and every minor league affiliate has a baseball chapel every Sunday in the clubhouse. Our theory is that if it’s good enough for the major leagues, it’s good enough for a little baseball team out of Ivesdale! <laughs>