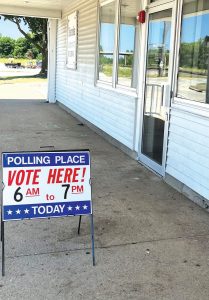 By Kendra Hennis
Illinois primary elections were moved this year in an effort by state lawmakers to accommodate delayed 2020 census data. This year’s primary was held June 28, 2022 and brought out 29 percent of Douglas County voters. Of the 3,3382 voters–24 selected nonpartisan ballots, 365 democratic, and 2,993 republican.

In local news, Ed Carleton unseated incumbent James L. Mikeworth for the County Board 6th District Member (Republican) with 57 percent of the vote. Write-in candidate Susan Haynes-Diener was voted to fill the seat left in the 5th District by Don Munson, who did not seek re-election. Thomas Hettinger, Philip W. Morris, Gary Luth, Richard E. Hein, and Mary E. (Bibby) Appleby ran unopposed and will return to their seats on the board.

Douglas County Clerk and Recorder Judi Pollock was voted to return to her position, as were County Treasurer Bobbi Reardon and Douglas County Sheriff Nathan Chaplin.

Favorites among the Democrats were JB Pritzker (Juliana Stratton) for governor with 86 percent of the vote, Tammy Duckworth for state senator with 343 votes, and Alexi Giannoulias for secretary of state with 61 percent of the vote.

Full primary election results can be found at www.douglascountyil.gov. The General Election will be held on November 8, 2022 in Illinois.