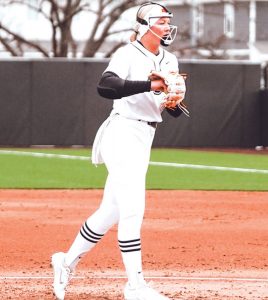 By Lenny Sementi
Warrior Softball Alum Morgan Day ended her college softball career on the biggest stage the sport has to offer. The former Tuscola ace transferred from Illinois State to Oklahoma State University in pursuit of a final season and a graduate degree in Mass Communications. And what a year it was for her and the Cowgirls ending it at the NCAA College World Series just one game short of a finals berth.

The Cowgirls advanced to the semi-finals through the winners bracket but came up short falling to eventual runner-up Texas. Day pitched the first of two games in the semis in a hard fought loss to the Longhorns and then entered with the bases jammed in the top of the seventh with two gone in game two. It took her five pitches to end the threat with that one final K as the Cowgirls rally fell short.

She had a 16-strikeout game early in the year in a two-hit, seven-inning gem over DePaul but was without a doubt at her best in the postseason. She started her late season assault, giving up one run in seven innings of work in a semifinal win over Texas at the Big 12 Tournament at Hall of Fame Stadium in Oklahoma City. Then backed it up one night later, handing the national champion Sooners of Oklahoma one of its only four losses of the year firing five innings of three-hit relief to collect a win and a Big 12 Title and The Big 12’s Tournaments Outstanding Player Award.

She didn’t stop there Nebraska was the next victim for the hard throwing righty in the Regional Championship game on her home turf scattering five hits out over seven innings. The next week she collected the win after throwing the first five innings in a Super Regional win over Clemson clinching the Cowgirls spot in the World Series and in the words of exuberant and proud dad Scott Day “Back to OKC Baby, Back to OKC, She’s going to the world series.”

You can say it was a dream come true, that however doesn’t scratch the surface of what Morgan and her family put into this accomplishment. As her coach in high school and a witness to her college career four words come to mind, quest, perseverance, passion and family. It was a quest not a dream for a young lady that always believed in herself, more than anyone, the doubt from others fueled the work in the weight room, the late night pitching sessions in the shed and a drive to succeed.

Sure there were bumps in the road along the way, arguments about technique with her dad, long trips, long days but through it all Morgan persevered. And right there with her every step of the way were her parents Scott and Kirsten along with brothers Griffin and Mason fueling the passion. If you know anything about travel sports it’s a family affair and for the Days it was a journey they will never forget.

She was part of three regional championships at Tuscola, an All CIC First Team selection and part of an elite eight team her junior year, was the Herald and Review Player of the year her senior year and an All-Stater. At ISU she was named to the Missouri Valley Conference All Tournament Team in 2018, was second team All MVC in 19, was all preseason MVC in 20 and was ranked seventh in the nation in strikeouts before COVID ended the year, and in 2021 collected First Team MVC honors, MVC Scholar Athlete accolades, and was named to the All-Mideast Region NFCA second team.

We had the privilege of eating breakfast with Morgan one morning last fall in Stillwater after an Oklahoma State Football game the night before and witnessed first hand her passion for the sport and her new team. She predicted right then they would be in the World Series, she went on and on about how good her teammates and coaches were. She knew the Cowgirls returned one of the best pitchers in college softball from the year before and were getting an All American Transfer to the circle at the semester and her confidence in herself never waned. Morgan simply stated “they will make me better, and the team better,” no time for selfishness in her world, just a never-ending work ethic to get her a seat at the table.