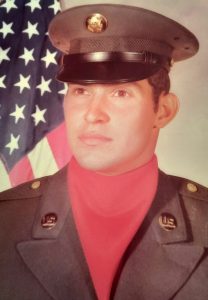 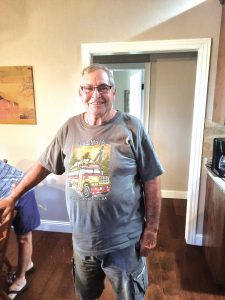 By Tony Hooker
There are heroes who walk among us, most often anonymously. Folks who at one time or another were willing to make the ultimate sacrifice for the greater good. My hunting buddy Paul Wilhelm is one such person. I recently sat down with the 1971 VGHS grad to talk about growing up in VG, his time in the Army, and his career.

What year did you graduate from Villa Grove?

Do you remember what you wanted to do when you graduated?

I wanted to be a union laborer. My junior year, a friend of mine got me into the labor hall, and I labored that summer, went back to school for my senior year and then went back to the hall when I graduated.

Did you stay with the Laborer’s?

Which branch did you decide to join?

I joined the Army.

What was your job in the Army?

I signed up to be a combat engineer, but I realized I didn’t really like it. They asked for volunteers to work in the Special Atomic Demolition Munition Unit, so I raised my hand and decided I’d try that field. I went to Virginia for three weeks of training and learned how to put bombs together and then I went to Germany for two and a half years.

That’s the sort of job that you only get one mistake at, right?

Yeah, you really didn’t get a second chance! <laughs>

How long were you in?

I served for three and a half years.

Did you come back to Villa Grove then?

We lived on a farm in rural Tolono, right on the line between Unity and VG.

And you moved back there?

My dad was getting ready to retire, and he asked me if I would be interested in farming, and I agreed. I worked as a laborer, and she worked part-time and then we farmed on the weekends. I did that for 34 years, and then I got a chance to go to work for the Department of Transportation, so I did that for 20 years, and now I work at Walnut Point for forty hours a week, during the summer, but I think that’s going to be my last year of doing that. I’m going to be seventy, and they just offered me a full-time job, but I didn’t think I needed to be taking a full-time job at 70!

What do you like the most about your job at the Park?

I like the mowing and taking care of the park. You meet a lot of new people. It’s nice.

The heat! <both laugh>

What were some of the more memorable projects you worked on as a laborer?

I worked on St. Matthew’s church, from the ground up. I worked as a hod carrier, setting up scaffolding and carrying mortar for the brick layers. I also worked at Clark Lindsay Village in Urbana. I didn’t have a lot of building and trades work. I worked on some highways, first with Champaign Asphalt and then I got on with a company out of Chicago and worked with them for 18 years.

What would you tell someone who was considering a career with the laborer’s?

It’s a good opportunity to learn a trade. You work with carpenters; you work with bricklayers and concrete and asphalt workers. It just lets you be a jack of all trades. We didn’t work much with electricians and ironworkers; they were kind of on their own.

I don’t think younger people realize what a good opportunity it can be.

You knew this was what you wanted to do when you were a junior in high school?

I did. A friend of mine called me one summer night. That’s when they were building Interstate 57 from Pesotum to Champaign and on up. We got on the job, building from Rantoul to the Ford County line, and I worked up there for the whole summer. My time as a laborer didn’t stop when I was in the Army, and as soon as I got out, I went up there and Jimmy Feltner got me a job that same day.

While you were in the Army, you assembled Nuclear weapons?

That had to be terribly nerve wracking.

We trained every day, and once a month we were inspected and tested. We had these inspectors who would send us to the field and send us a message, and we would put one together and set the timers on it. They would send us a message whether to detonate or disarm it. We were always training, and we knew it was a one-time mission. It was really interesting, and I’d probably do it again, even though when I think about it now it seems pretty dumb, since I had a wife. We couldn’t let the weapon out of our sight because we didn’t want it to fall into enemy hands and we were on alert several times, and I might not have come back.

In the moment, it didn’t really occur to you that you could be sent on a one way mission?

No. We (he and his wife) talked about it, and she said that I was young and probably thought I was bullet proof.

Combat engineering wasn’t for you?

No, I wasn’t much into building those bridges by hand. The funny thing is, when I worked for the state for those twenty years, I worked on bridges!

Other than your seasonal employment at Walnut Point, what do you do to occupy your time these days?

We like to travel and do some gardening. We like to go for rides on our cycle. We have a trike that we ride whenever we can. We like to visit our two daughters and our grandchildren when we can. They all live in the Pesotum area, except for our grandson who’s a lineman in Missouri.