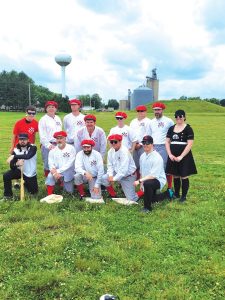 By Tony Hooker
Growing up in the South Shores neighborhood near Decatur, Camargo resident Michael “Drifter” Griffin was like just about all neighborhood kids, everywhere. A vacant local lot became ball game central on most days, with baseball taking the stage in the warmer months and football coming to the fore in the cooler seasons. The sandlot at the Oak Grove Church at the corner of Franklin and Grove road became a sports central for Griffin and his cronies. As he grew older, he played organized ball at the American Legion level and then moved into softball as an adult.

Little did Griffin know that his love of sports would manifest itself a few decades later in his dogged pursuit of putting together a Vintage Base Ball team, the Summit Station Signalmen.

Griffin, who earned the handle “Drifter” because of his willingness to travel all over the region to share his passion for Base Ball, was happy to spend a few moments prior to his Saturday game to discuss how he, his teammates and Vintage Base Ball Players all over the country have worked to combine their loves sports, camaraderie and theatrics in order to bring a 160-year-old pastime back to life.

Where did your interest in Vintage Base Ball come from?

Oh boy! <laughs> Twenty-five years ago, I lived in Atwood, Illinois. They have a festival there called the Apple Dumpling Festival, and they said they were going to have an old-fashioned Base Ball game, just a quarter mile from my house. I took my little boy there and watched an old time Base Ball game. I thought those guys were insane! They had no gloves, used thick wooden bats and they played in this knee-high grass in the middle of a farm lot. I still thought it was really cool, but that was it. That was the last time I saw it for 25 years. Then, three and a half years ago, we went to St. Louis for a Cardinals game. My wife and I are raising her grandson, we’ve had him since he was 2, and at the time he was probably 11 and he had his buddy Lila with him, and she wanted to go by the Arch. We rode the metro across the river and as we were walking up to the Arch, there were all these old fools out there, playing Base Ball under the arch without gloves on. I had lost 50 pounds at the time, and I told my wife that I wanted to play ball again, but that I wasn’t interested in competitive softball or anything like that, and I said “this is it, man. This looks like a lot of fun.” The guys were out there laughing and joking and having a good time. The teams were shaking hands walking on and off the field and complementing each other on good plays. I talked with one of the team captains who was there, “Chatterbox,” who played with the St. Louis Perfectos, and I told him I had seen this once before, twenty-five years ago in Atwood, and he said “The Apple Dumpling Festival? I was there!” and to me it was kind of an omen. I went home and found the team nearest to me, the Vermillion Voles, in Danville, and two weeks later, I was right back in St. Louis at the St. Louis cup in Forest Park. I played five games at third base and got the hell beat out of me! <laughs> The rest is kind of history. I played for the Voles the rest of that year and I decided that I wanted to get my own team started. We did a program at Riggs (Riggs Brewing, in Urbana) and we had some teams from out of town, and I picked up a few players there. Every time I do a promotional event, I pick up a few players. It’s taken me 3 years to get the 14 players we have on the team now. It’s difficult, not only to reach people, but to reach the right person, because this isn’t for everyone.

Is that what’s been the most difficult thing about putting your team together?

It is. It really does take the right frame of mind to want to play this game, and to recreate the game of Base Ball as it was played in 1858. I tell everyone that we’re actors first and players second. We’re not competitive. We’re not going to go out there and just try to win every single game and run over other teams. We’re not going to try to run the score up. One of the guys in our league in Springfield said it the best. He said, “You play this game not to win, but to get invited back.” You don’t want to go on the road and score 40 runs and blow them out 40-2. You won’t get invited back. That’s not what this is about. It’s about learning how Base Ball was played in 1858 and entertaining the audience who comes to watch.

Where are your guys from?

They’re from a little bit of everywhere. Most of them are from the Champaign-Urbana area. Savoy. I’m from Camargo, there’s a guy from St. Joe. A couple of guys from here in Philo are playing today. Our visiting team ended up being double booked, so we’re going to line up and play an intersquad game today. I have two members of the McClean County Prairie Chickens here today and “Mayhem,” who plays for the St. Louis Union, happened to be visiting in Champaign this weekend and came down to play for us. That’s kind of how these teams are. Especially in the Midwest, we all know each other and travel together and help each other out with players when they need it, especially going on the road.

How often do you play?

I actually have games pretty much every Saturday, every weekend between the Vintage Ball and the Golden Age Base Ball in Bloomington, where we dress as the ghost players from the “Field of Dreams.” I pretty much have games every weekend. We’ll usually start in May with games in St. Louis, and we’ll end it doing the same, in September or October.

So, this is much more than a hobby to you, isn’t it?

It really is! It’s a lifestyle. There is so much camaraderie amongst the players in this league because they know what you have to do to play in this league. It takes a lot of dedication. I’m still recruiting players. I’ll always be recruiting players. If I end up with 40 players, we’ll turn it into two teams. It generally takes at least 20 players to draw 9 for every road game that you play, and it’s generally a different 9 at every game.

What is the significance of the name “Summit Station Signalmen?”

Bad luck is what it is! <laughs> Originally, I tried to get this team headquartered in Champaign Urbana and I was going to call it the Champaign Urbana Twins, but the park district demanded that we play on a regular field for insurance purposes. I couldn’t get them to understand that we were recreating games as they were played 160 years ago, almost like a civil war reenactment. We have to play in grass farm lots. We don’t want any modern facilities, that’s a big no no in this league. I just couldn’t make the connection with the Champaign Park District, which was a disappointment, because I thought we would have bigger crowds if we could host this in Champaign. The Twins died out, and I went on social media and asked all the towns around CU if they would be interested, and Philo spoke up first. I work for the railroad that runs right through here (indicates tracks in right field) and I’m a signal maintainer. The title for a construction worker in the signal department is Signalman. Summit Station existed before Philo did. The Wabash Railroad originally called it Summit Station because they had a station and a depot and all of that. It sat on top of a hill, so they called it Summit Station. So that’s how the Summit Station Signalmen were born. That’s generally what we do when we name our teams. We go back through history and try to find some event, person or product that was from the particular area and name the team after that.

Your gear is as close to authentic as possible, correct?

Yes. There are manufacturers out there that make the clothing. We have bat companies that will make replica vintage bats. They’re thicker in the handle and a lot heavier. We have guys with lathes at homes and they’ll make their own bats.

Wow, so it really is a lifestyle, right? It’s not something that you can pick up and do once or twice a year.

No. To be considered an actual vintage team, the association asks that you play at least six time a year. In that way, they kind of weed out the once or twice a year, drunken competitive teams. They really push the dedication of the sport. With my team, I like to push the diversity part of it. Base Ball in 1858 was pre-Civil War. Everybody played Base Ball, just for fun. There were lady’s teams. There were black players on the teams. Base Ball began well before the game was ruined by rich owners who turned it into a money-making operation, segregated it and ruined the sport for the next 50 years. I push that with this team. We’re going to have a diverse squad. I’ve created a welcoming atmosphere, and that’s the way this game is meant to be played. When you get down around St. Louis, there is almost a carnival atmosphere surrounding the games. There are tents everywhere, and there are thousands of people lining the field. It’s really a bit intimidating! The fans want pictures with the players, and we’ve gotten a lot of people interested in the sport, just through events like that.

Do you try to use vintage lingo at your games?

Yes. We actually have pamphlets that outline the language to use our Facebook page and on the Vintage Base Ball web page. There are a lot of handshakes. There are a lot of “well played, sirs” and hat tipping going on. The whole point of this is to be as authentic as we possibly can. The league slogan is “There’s no swearing, no spitting and no sliding.” When you walk out on that field, you’re in character. 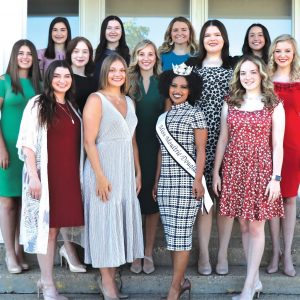 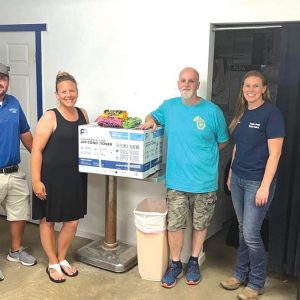 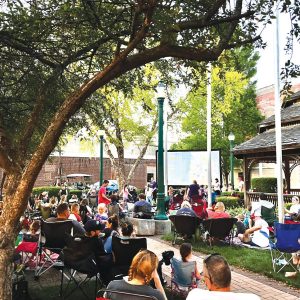