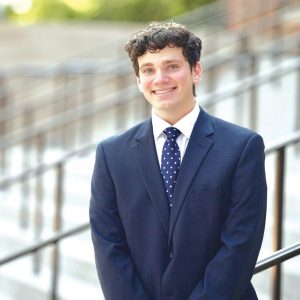 I recently caught up with Gulick, a 2018 VGHS graduate, to talk about his interest in learning Arabic, his future plans, and much more.

Let’s talk about the recent award you received. What exactly is it?

I received a Boren Scholarship. It’s a program run by the Defense Language and National Security Education Office. It gives students who want to study less commonly taught languages the opportunity to study abroad, for as little as a semester, up to a full year, for free. In exchange, you agree to work for the federal government, hopefully in an area of national security, for at least a year.

Let’s backtrack a little bit. You’re currently a student at the University of Illinois?

Yes. I majored in Political Science and History.

I assume that this is 100 percent immersion, so you’ll be fluent in your chosen language when you return to the US?

I hope so! <laughs> That would be a goal. I’m studying Arabic, I started studying my freshman year at the U of I, so I’ve gotten four  years of that, so far.

What country will you be living in?

I’ll be going to Jordan.

Are you nervous, excited? A little of both?

I think a little of both. I’m excited to travel and go somewhere new, but this is my first time really going away from Illinois for a long period of time, so I’m definitely a little nervous about adjusting to a new culture and language and everything.

I hate to have to ask, but in these turbulent times, is Jordan safe?

That’s a good question. It’s very safe, for the Middle East. It’s equivalent to a European country, so there’s street crime, pick pocketing and stuff, but they’ve really put a lot of resources into making it safe for western visitors and tourists. The region around it is not, however. Everything around it is not stable.

Let’s define what your career goals are. You grew up in Villa Grove. Your dad was a Villa Grovian, as well. Where do you think the drive to choose the career path you’ve chosen came from?

I’m not entirely sure about my career. I’m still pretty interested in going to law school. I focused here (at UIUC) on international relations, and so I see myself doing international or immigration law. Really, I knew from taking Spanish at Villa Grove that I wanted to study a language in college, and I wanted to choose a difficult one while I was here at the University. At first, I kind of wanted to be a diplomat or work in the CIA, but that’s kind of changed. I really want to learn a lot more about an area of the world that I didn’t feel I knew a lot about, but, like you said, has always been on the news in my lifetime. There are clearly a lot of issues and politics that are very salient in the Middle East. I think it was just a desire to maybe work over there for a period of time.

How did your dad influence your decision?

My dad was always a very strong advocate for the University of Illinois. He pointed out that the language department at the university was one of the best in the world, and that I should take advantage of it. He even helped me look through the State Department website, always being very involved and nurturing, when I first began to consider a career in government.

Did you graduate from UIUC?

Kind of. I’m done with school here, but I have to be enrolled in a US institution while I’m overseas. Technically, I will go to commencement and graduate next year.

While you’re in Jordan, will you be taking college classes or just intensive language studies?

The majority of it definitely has to be intensive languages, but the institute I’ll be studying at has evening classes that are more politics and culture related so I’m going to try and take one of those each semester. The focus is definitely on language acquisition.

Are those courses taught in English or Arabic?

I think the earlier ones might be more of a mix, but some of the ones I’ll be jumping into will be strictly taught in Arabic. The evening content classes will be taught in English, though.

How conversant in Arabic are you now, after studying for four years at university?

I think I’m at an intermediate level. For the first three years, I took the formal Arabic, which is mostly used in the Koran and educational settings, academia, the news media and places like that, but most people don’t speak that, it’s more of a written language. This past year, I took a year of Jordanian Arabic to start learning how to talk in the dialects. I feel like I have a good basis to get around while I’m over there, but it’s something that I really want to focus on when I’m over there.

Have you heard people conversing in their native language, and have you whipped out your Arabic and surprised them that this small-town Villa Grove kid can converse with them?

<laughs>We have had a lot of conversations in class, and I feel pretty good about being able to get around in an airport or restaurant and have basic conversations about my family and things like that.

That’s probably about where my level of Spanish is now, also. <laughs>

What is Jake Gulick up to, five years from now?

Maybe finishing up law school, while still working though. I want to get started, helping people who don’t speak English and want to move here, or who are already living here, get help getting their visas renewed. I want to help those whose English isn’t the best, but I’m not sure about all of that yet.

You just finished a two-day orientation for the scholarship program?

They do an orientation for the program that focuses a lot on security related stuff. Stuff like how to avoid getting into risky security situations since we’ll be working for the federal government when we return. Stuff like what to do if you’re approached by foreign intelligence agencies, precautions like that.

Do you have any idea of where you’ll be working upon completion of your scholarship year?

I’m hoping to be working in Washington, DC. I’m going to apply for a consular fellows program, where I’ll basically be a visa and asylum officer for the state department. That would be my ideal next step, but otherwise, I’ll be working in DC for a federal agency. I would really like to work in an agency involved in immigration, where I can use my language a lot, that’s the general idea.

How about on the social side? Have you made friends through your Arabic speaking?

Definitely. In the Arabic department, many of the students are heritage speakers whose parents grew up with it and they learned it growing up, but not to a formal extent, so they’re trying to learn that part of it. I’ve met one or two native speakers from the Middle East from my time at the university, and all of my instructors have either been native or heritage speakers.

Do you have any homies from Jordan who are giving you tips?

No. Not yet. <laughs> My roommate last year studied in Jordan for a few months, so she’s been giving me pointers, helping me through this process, and that’s been really great. Part of the reason why I wanted to go is because I heard some really good stuff from her experiences.

Being a small-town Villa Grovian, it’s very difficult at times for me to differentiate between someone who speaks Arabic, and someone of the Islamic faith. Not all Arabic speakers are Muslims, right?

Jordan is 95 percent Muslim, so there is a great overlap, but that is a good point.