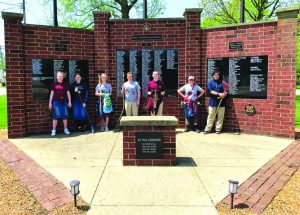 By Tony Hooker
There are probably almost as many reasons for why families choose to enroll their students in private Christian schools as there are students.

For VGHS graduate Cheri Bonds, who elected to send her child to Faith Christian Academy in Sidell, the choice was easy. “In a faith-based school the kids and the faculty answer to a higher power. On a daily basis you know that God sees all and knows all. It raises the bar and creates a totally different atmosphere for your child. It goes beyond the obvious things that most people think you get from a private smaller school. It is the overall experience of being involved in a faith-based school. The staff, parents, and peers are all on the same page. We serve the Lord first and the rest falls in place.”

Statistics show that more and more families are choosing to have their children enroll in private faith based Christian schools than ever before. In addition to Faith Christian Academy, East Central Illinois Christian School, located in Newman, is preparing for their first classrooms of students when they begin teaching on September 6.

I recently caught up with Dr. Vickie L. McCarty, the administrator at Faith Christian and with April Lee, the President of the board for ECICS, to learn more about the impetus behind the formation of these two schools, the issues surrounding their formation, and much more.

Dr. McCarty, what, in your academic background, led you to Faith Christian Academy?

I would say that a big shift in my personal background happened in 2010 when I decided that I wanted to go into counseling and creation therapy, and things like that. I received my PhD and got an opportunity to teach at Arthur Okaw Christian School in 2017. We’ve patterned ourselves after them, actually. I drove an hour and 10 minutes one way to go down there and teach junior high. I’ve been a church educator, but I fell in love with it. They’re a great group of people and I was with them their first year in their brand-new building. I was considering going back there to teach another year, but I felt a nudge to offer something to our community here in Sidell.

Nationally, there seems to be a huge new demand for private, Christian education. Would you agree with that?

Absolutely, I would agree with that. Over the last few years, we’ve seen that major push. Prior to doing what I do now, I homeschooled our boys. We homeschooled every day and partnered up with a couple of other parents who were doing the same thing and put activities on the calendar to get them socialization and things, and then, after my year at Arthur, it was a real life changing, pivotal point for me, because I felt that we could do the same here, on a smaller scale.

What do you think has been the driving factor behind this expansion (in private Christian schools)?

There are definitely several factors. One is, I wanted to do this for our boys. Since I was homeschooling them anyway, I thought I could be helping a couple other students by doing the same thing. I could hear frustration in other parents’ voices. Worry, fear, and frustration about what they’re hearing, what they’re having to deal with in public schools and other avenues, as far as that goes, and I thought I could maybe help another student or two. I began to pray about it, and I talked to my brother (Tim Pearman, Pastor at Sidell Assembly) and I said I thought we could do this. We started FCA in 2018. I didn’t want this to be a glorified homeschool group. I wanted this to be professional and I wanted a very good curriculum, scheduling and all of it. I felt a compassion to do it. I felt that urgency that if we were ever going to do it, the time was now. It’s our fourth year, and it’s been an amazing ride. We have prayer. We say the Pledge of Allegiance every morning. We’ve had students who had been beaten down, beaten up at their previous institutions, lacking any self-esteem, and we accepted them without any special classrooms, and we put them in their seats in a regular classroom and now they’re A&B students. Their self-esteem has improved. I brought some of that counseling that I had trained for into the classroom. We just encourage them, and we’ve seen phenomenal results from our efforts, and I think that just keeps us going.

What are the age ranges of your students?

We do preschool through 12th grade.

Do you develop independent curricula for each age group?

We develop curricula for our preschoolers, for sure. We adapt and use the ABEKA curriculum, and we are what is know as a master video school, so our kids can watch videos online, put out by the Pensacola Christian College and then we also get their materials and we’ll let them watch a video in a class and then we’ll teach another class. Our electives are pretty much designed by myself or by my daughter, who works in elementary. We have culinary classes and chorale classes. We have singing and art classes, different things like that. I create the content for our Psychology class, so it’s a bit of both, actually. That’s how we roll around here! <laughs> Because we’re a video school, on a snow day or back when we were being quarantined, they were able to just log in and never miss a beat.

How many students do you have?

We have 18 students this year.

Is that a target number, or do you envision it growing larger?

No, no. We started off with ten kids and now we’re at 18 and I’ve already got people telling me that they’re coming next year so we see that potential growth. The church that we’re in now has been added on to a couple of times. We just purchased some land next to us, thinking we might build a school, but instead, we’re going to take over the church where we’re at, and our church is going to build a new church. We’re really excited that we feel that growth and that we’re solid enough, now. We’ve got four years into this and we’re not going anywhere. It’s working and being successful and we’re offering something to our community where they don’t feel like they have to drive 40 minutes to find a private school.

What do you think the limit is? Can you envision a time when you’re accommodating 250 students?

We’re going to grow with it! <laughs> We know what our limit is in the building that we have, but we’re not going to limit God and we’re not going to limit what we’re able to do if this thing grows. I know a lot of people don’t know we’re here. We don’t do a lot of advertising. We don’t have a big budget, but I talk to people all the time and they say, “You have a school in Sidell?” It’s amazing. We have the biggest church in town and now we have a private school in town! We all grew up around here and I thought it would be great to offer something down here. I don’t know where this thing is going to go. In five or ten years, we could be at a couple hundred students, but I just know we’re going to grow with it. The only limitation I see is the physical limitation. We can only fit so many students into a classroom. With God, he can do all things. We prayed about the property next to this church and the guy wasn’t willing to sell. We kept praying about it and it all turned around and we own the property. We’ve got 8000 square feet here. If we need to build, we will. We’ll grow with it, but honestly, I’m ok with whatever number of students we have. It’s not about reaching 100 students or 200 students. It’s about letting them know that we’re here and if you want an alternative, come try us out. (Next week-ECICS)