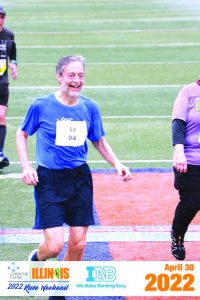 By Tony Hooker
To say that Ed Cler finds great joy in running would seem to be an understatement based on the perpetual smile on his face during his races. I recently caught up with the seventy-something year old athlete to talk about his love for the sport in which he has participated for most of the past six decades.

How long have you been a runner?

I probably started soon after I left high school. (VGHS class of ’67)

Did they have cross country while you were in high school?

I don’t think they did. They had track.

What drew you to running?

What did you find appealing about it that has led you to continue for this long?

I suppose that wanting to stay fit might have been a reason.

Do you ever get that competitive drive when you’re in a race? For example, when you see Jeff Holmes a few feet ahead of you, do you try to kick on the jets and pass him?

Jeff always beats me in the short runs, but I think I do okay on the longer runs. <laughs>

What traits does it take to be a good runner? You’ve been running for 55 years now. What has helped you remain a good runner for that period of time?

You know, from time to time I get injured and have to stop and do something (about it). The last time I had some muscle aches and went into sports medicine, the doctor said I had good cartilage, so I don’t think it’s anything I do, other than being blessed with good joints.

I think there’s a mental aspect of running, also, a drive to keep pushing through your training. Would you agree?

Now there is, for me, because I hope to keep competing in the next age group at the Illinois Marathon. That’s the goal, but it’s harder every year. <laughs>

I will register for the full marathon, but we’ll see. There’s a lot of potential for injury with training for that, so we’ll see how it goes.

How often do you train?

Do you do any preparation other than running?

I have started stretching, ever since my last injury. The doc said, “you need to do something other than just go out and run, and when you’re done, you just stop.” <laughing> The Doc says not to do that.

Do you think that the mental traits that you possess that allow you to be a good runner have translated into other areas of your life? I’ve been curious about this. When you worked at Paul’s Machine and Welding, you were 100% focused. You are 100% focused on our church. Do you think that comes from running, or is that focus something with which you’ve always been blessed?

I think exercise is a good stress reliever. I think it helps with having a good outlook on life.

They say that exercise helps you keep a clear head. Do you find that to be the case?

It’s interesting that you asked that question. I often would go out jogging and think about my work, and solutions to issues would sort of come to me while I had all that blood pumping through my head.

There’s probably no end in sight to this for you? You’re going to keep on doing this (running) as long as the good Lord will let you?

Is it about the personal gratification at this point? You’re not going out there looking for medals, are you?

You know, I always wish for medals. In this day and age, it’s easier to get medals because the pool of runners keeps shrinking, so if I can just hang in there, my chances are better! <smiles> In 2019, there were three runners in my age group, and I finished second.

Do you have any races coming up?

I will run the Ag Days race, and then around Halloween, I’ll run the 5.7-mile trail run at Allerton Park, in Monticello. Once again, you see, I’ve had the opportunity to maybe place second because there just aren’t that many people my age who are still running. <laughs>