Portrayed include Minnie Conn Jolley, who was depicted by Raeanna Boyer. Jolley (1901-1999) was one of six Conn siblings to serve in the military, serving in the Civilian Air Patrol Auxiliary of the US Air Force. At the time, there were many who thought that women weren’t capable of flying or being mechanics. However, Jolley knew planes inside and out. She served as the Deputy Flight Leader of the CAP at Lunken Airport. She raised money for the war efforts by giving people rides around Cincinnati in exchange for war bonds. Along with flying planes, Jolley loved jumping out of them. She became one of 12 women in the National Parachute Jumper’s Association and participated in many stunt shows. Additionally, Jolley was honored with a membership in the National Aeronautics Association of the U.S.A. and The Greater Cincinnati Aimen’s Club.

Joseph Gurney ”Uncle Joe” Cannon who was played by Thomas Spillman. Cannon (1836-1926) was a United States politician and leader of the Republican Party. He served as the Speaker of the United States House of Representatives from 1903 to 1911, and many considered him to be the most dominant Speaker in United States history. Cannon grew up in Indiana and later relocated to Tuscola where he became State’s attorney for the 27th judicial district of Illinois. Cannon additionally brought a federal Veterans Administration Hospital to Danville which continues to serve military veterans. He also appeared on the cover of the first issue of TIME magazine.

Lester Alvin “Smiley” Burnette was depicted by TCHS student Caleb Haste. Burnette (1911-1967) was a country music performer and comedic actor in Western films, radio, and TV, playing sidekick to Autry, Roy Rogers, and other movie cowboys. He was also a prolific singer-songwriter who could play as many as 100 musical instruments. In his teens in 1929, he worked for WDZ radio in Tuscola. He came by his nickname while creating a character for a WDZ children’s program for a Mark Twain character.

Maxine Thayer was played by Liriel Jones. Thayer (1921-2006) was a softball player and coach. Dubbed Indy’s “First Lady of Softball”, she was born and raised in Tuscola and played softball from the early 1940’s to 1955. She went on to coach and manage ASA Women’s Fastpitch teams like the Anchorettes for 29 years, participating in seven National Tournaments with a third place finish in 1974. She became the most-winning coach with 1,118 wins and only 475 losses. During her lifetime, her achievements include: presented with the All Sports Award medal by the Indianapolis Chamber of Commerce in 1963; was the Deputy Softball Commissioner for 28 years in Indy; was the league director of slow pitch for girls under 19 years old; nominated for the 1976 Indianpolis Woman of the Year; was included in the 1977-78 edition of Who’s Who of American Women; was presented with Sagamore of the Wabash award by Governor Robert Orr in 1984; had a day declared in her honor by Mayor William Hudnut; became the first woman lifetime member of ASA in 1978; and was inducted to the ASA Hall of Fame in 1988.

Dr. Benjamin Franklin Roller was depicted by TCHS student Grant Kauffman. Roller (1876-1933) was a physician, university professor, and three-time American Heavyweight Champion wrestler. He grew up on a farm in Newman before attending school in Indiana. After college, he practiced medicine briefly before teaching. During his tenure at the University of Washington in Seattle, he became a professional wrestler at the age of 30. Roller won two falls in a period of 17 minutes and received $1,600. After that, he started having matches around the Northwest, under the names Dr. Roller, Dr. Benjamin Roller, Dr. B.F. Roller, and Doc Roller. Roller decided to use wrestling as a tool for traveling the world and studying under noted professors in both the United States and Europe. Over the span of his career, he defeated many top wrestlers of his day, and posted a record of 39 wins, 26 losses, and four draws in 69 matches.

Jonny Guelle was played by Kaleb Jeffers. Gruelle (1880-1938) was an American artist, political cartoonist, songwriter, children’s book author, and illustrator born in Arcola. He is known as the creator of Raggedy Ann and Raggedy Andy. Gruelle’s first cartoons first appeared in print in the Indianapolis Star in 1905. Sometime around the turn of the 20th century, his wife Myrtle Gruelle recalled, “There was something he wanted from the attic. While he was rummaging around for it, he found an old rag doll his mother had made for his sister. He said then that the doll would make a good story.” Gruelle watched his daughter, Marcella, for inspiration for his Raggedy Ann stories. In 1915, he patented and trademarked the design and name. In 1918, the P. F. Volland Company published Raggedy Ann stories, promoting it with a Raggedy Ann doll. Both became major successes.

Margery C. Carlson was depicted by Elle Jones. Carlson (1892-1985) was a botanist and expeditioner born in Arthur. She was the first woman to major in botany at Northwestern University and went on to become the first full-time female professor at Northwestern. She was also a research assistant at the Field Museum and made five international trips to Mexico and Central America to discover and catalog various plant species with her partner Kate Staley. Traveling the dense jungle terrain by jeep, airplane, ox, and on foot, she discovered many new plant species and collected thousands of plants often for the Field Museum on her expeditions. She was the first female lead expeditioner to ever travel to the mountains of El Salvador for a scientific project and was the founder of the Illinois Chapter of the Nature Conservancy. Carlson also won two major awards from the Garden Club of America, an honorary member of Graduate Women in Science, and a fellowship named after her and her partner, the Margery Carlson & Kate Stanley Fellowship.

Linda Jo Metheny was portrayed by TCHS student Reggan Smith. Metheny (1947-present) is a retired Olympic gymnast. She attended Tuscola High School and graduated in 1965. She began competing in gymnastics in 1962 and between 1964 and 1973, was a member of the national team. After the 1964 Olympics, she enrolled at the University of Illinois as their only female gymnast. During her Olympic career, she won seven gold, three silver, and one bronze medal at the Pan American Games in 1967 and 1971, and served as the flag bearer for the American team in 1971. She competed in the 1964, 1986, and 1972 Olympics with the best individual result of fourth place on the balance beam in 1969. Domesticall she won at least 18 individual national titles. In 1985, she was inducted into the U.S. Gymnastics Hall of Fame.

Kenneth Leon “Tug” Wilson was played by Cameron Mills. Wilson (1892-1979) was an Olympic athlete who was involved in athletics throughout most of his life. Growing up in Atwood, Wilson was a runner in high school and a teacher for country schools for two years. After that, he attended the University of Illinois and competed in the discus throw, shot put, and javelin throw. Wilson earned a spot and competed in the 1920 Summer Olympics, finishing tenth in the discus throw. He additionally served as the second commissioner of the Big Ten Conference, the highest position, from 1945 to 1961, and as the president of the United States Olympic Committee from 1953 to 1965.

Denver Darling was portrayed by TCHS student Brady Urban. Darling was another popular talent at the Tuscola WDZ station as a radio cowboy. Darling was born in Whopock, Illinois and raised in Jewett. He started playing guitar at the age of 12. He spent a number of years working and singing at several Midwestern radio stations. He played the guitar and sang on the WDZ station in the early 1930’s, before moving to New York City. Darling also recorded under the name of Tex Grande and his Range Riders. In total, he made over 120 records until he began having throat problems and grew uncomfortable with big city life. He and his family then moved back to Jewett, where he lived as a farmer for the next 30 years.

Effie Chavous Bridgewater was played by Gracie Johnson. Bridgewater (1877- 1975) was part of the Bridgewater family that has been an influential force on the Champaign-Urbana jazz music scene for years. She worked at WDZ radio station in Tuscola. Her husband, Preston, was a cornet player for the Ringling Brothers Barnum & Bailey Circus Band. She is also the mother of Pete Bridgewater, who played the trumpet in the U.S. Navy Jazz Band in World War II and went on to form the Pete Bridgewater Quintet.

The Douglas County Museum is full of history on Douglas County! The interactive mural is located on the outside of the building at 700 S. Main Street in Tuscola. More information on the mural can also be found by visiting http://www.douglascountymuseum.org/. 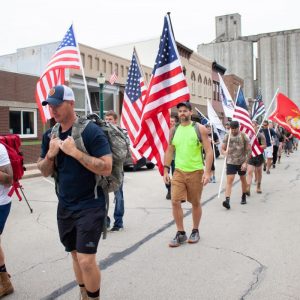