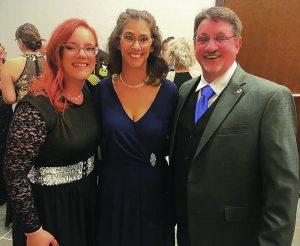 By Tony Hooker
Since opening, the folks at the Korner Beehive have worked hard. Not only to build their business, but to build community and support charitable organizations, especially those that benefit veterans.

So, it should come as no surprise that on May 14, in conjunction with Loyalty day festivities, rather than simply hosting a celebration of their first anniversary in business, they will be using the occasion to support Patriot Paws, an organization that connects Veterans with service dogs. I recently caught up with Jerry Jenks to discuss the day’s events.

Is the Korner Beehive the main sponsor of the event?

We’re calling this our anniversary event, even though we opened in July so it’s a little early. Our goal is to do something like this every year. Last year was our grand opening, this is our second annual, next year will be our third annual, et cetera.

As with everything you guys do, this will have a charitable aspect to it, right? Who is the beneficiary?

Our charity this year is Patriot PAWS. They provide service dogs for veterans with specific needs. One could be PTSD, or it could be for any number of reasons. Patriot PAWS helps locate those dogs and locate the veterans who are in need of their service and get them trained and get them together. In the grand scheme of things, it’s a pretty good deal. It costs about twenty thousand dollars to acquire, train and place a dog, so it’s not a cheap process. We recognize that $20,000 is a lot of money and we don’t expect to raise the entire amount, but if we could raise a quarter of it, that would be amazing. In part with this, our (Jerry and wife Beth) dog just had a litter of Dalmatian Puppies, and we are donating a dog for them. Patriot PAWS is pretty excited about it, because they’ve never had a dalmatian puppy be trained to be a service dog.

What are some of the day’s activities?

None of this happens without everyone’s efforts, so let’s start with what the VFW is planning. They’re kicking things off with the Loyalty Day Parade at 11 am, and then they’re having a spaghetti dinner at noon. The VFW will also be our fallback host location in case it rains, but we’re not going to have to do that because it’s going to be an amazing day! <laughs> We’re going to have several vendors coming to show off their wares, including several veteran operated vendors, and we’ll have four food trucks, in addition to our own local restaurants. “Sundown” will kick off our band lineup around 1:30ish. “Ancient Ways” will be playing from 5-7 p.m., and then “Cougar Trap” will be playing for the rest of the night. We served (in the SEABEES) with their front man Jacob McCall, and they’re pretty well known around here.

What is the admission price for this event?

There is no admission price, but we do ask that the people come with deep pockets to support our cause. I should add that we’re going to have a raffle, with several home made and gifted items, and people will buy tickets and put their tickets in to be drawn toward the end of the day’s events.

I want to give a shout out to Trisa’s Quilting Corner and More. They’ve made several quilts that they’ll be donating. I just want to end by saying that hopefully it’s a huge day that will draw lots of people to downtown Villa Grove. We want all of our local businesses to feel the impact of all these people coming to town for this event.