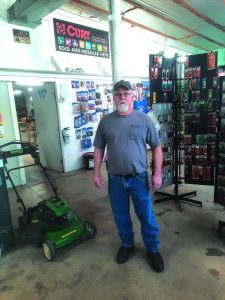 So why would he jump into the uncertain world of being a small business owner in Villa Grove? I recently sat down with him to find out.

How did your purchase of Bud’s Auto Parts all come about?

Opportunity knocks only once, I guess!

So, the opportunity presented itself and you acted on it?

What’s your business going to be called?

That’s an homage to your dad?

We’ll still be doing small engine repairs, but that’s seasonal, so in the wintertime, when I’m not booked up with lawnmowers, I’ll be able to work on sewing machines. In the summer, if someone has an emergency with a sewing machine, I’ll still take care of them, of course.

How long have you been doing the sewing machines?

And that’s through your wife’s business?

Are you planning on doing any auto repair?

I’m not really planning on getting too involved with auto repairs. We’ll do some small stuff, like tires and oil changes.

What’s your level of experience in this?

I’ve worked on my own stuff for a long time. I’ve been a mechanic, working on large trucks. I’ve done industrial maintenance and fabrication.

Did you get into fixing sewing machines by working on Trisa’s?

Kind of. She wouldn’t let me touch them at first.

<Trisa> Not until he went to school for it! <laughs>

She got a machine back and it wasn’t sewing right, and I asked her if I could make an adjustment, and I went in and made a few adjustments and got it to sew the way it was before.

What were you doing before this?

How did all this come to be? Did you just wander in and say, “Hey Bruce, can I buy your place?”

No. Someone told Trisa about it and she got ahold of me about it.

Were you surprised that Bruce had decided to sell?

Yes, I really was. I think Bruce has done a great job down here.

I think Randy to Bud, to Bruce to you is a good, local passing of the torch. When did you graduate?

I grew up here in Villa Grove, but then we moved to Newman in 1979 and I graduated from there. Then, we moved back in 1989. Our boys grew up and went to school here.

What do you think this next six months to a year is going to look like?

I think it’s going to be a lot of work, is what I think. I’m going to be doing the best I can to keep this business running the way Bruce ran it, and I’m going to be adding the sewing machine repair, scissor sharpening, I should be able to do a small pair of pruning sheers if someone needs them sharpened. I’ll be adding welding. I’ll be able to weld aluminum and stainless, carbon steel, that sort of thing. Hopefully, it won’t spread me too thin.

And Bruce is going to stick around and show you the ropes as far as the business side?

<Trisa> He’s got a lot of blood, sweat and tear in this place, so I don’t think he wants to lose it. I think it’s awesome that he’s willing to do that.

<Tony> I don’t want to let my wife down; I don’t want to let Bruce down. Really, I don’t wan to let the town down. I feel as though this will be a service where I can help people out. I just want to help people, and I think Bruce does too. I’ve seen a lot of his customers that he’s had for years, working on their lawnmowers, and I’m going to do the best that I can to keep them in town. When I was younger, I felt like I was in between the new kids coming in and the old timers that are retiring. Now I’m closer to the old timers and I’m hoping to just keep it going.

Did you feel like it was now or never, as far as the timing of this?

<Trisa> Age more than anything, but I don’t think he would have missed this opportunity. This was the right time for us to do this.

<Tony> The timing was right.

Are you looking to build a franchise of Trader’s Parts and more? <smiles>

Just like ZZ Topp, we’re going nationwide! <all laugh> No, I just love this small-town environment. People pull up here and Bruce goes out and puts windshield wiper blades on their vehicle. I want to be able to do the same thing. I want to do as much as I can to follow suit with what Bruce has done. That’s that hometown service that you just don’t get in the city. We really like living here, it’s home. Rosie Cler said it best when he said, “It’s a great place to live.”