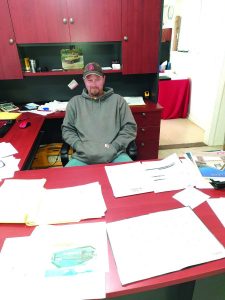 By Tony Hooker
Chances are, you’ve driven by a pole building that was built by Dennis Birchfield and his team at Walters. After over two decades in the business, he and Walters have put their stamp all over the Midwest. I recently caught up with Birchfield, Villa Grove’s unabashed “car guy,” to talk about the state of his business.

How did Walters Buildings come to be located in Villa Grove?

I worked for Walters right out of high school, around 1989 or 90, I was building pole barns. Then they became the FS (building) dealers in the area. Where I worked became an FS dealer. Then, after 21 years, I decided to start an office and work for the company. So, I went to work for the company and started it her. We’ve been in the area; it just had an FS sign on.

The main plant is in Allenton, Wisconsin, but we also have a plant here in Fairfield, Illinois. We have crews in Ohio, Kentucky, Minnesota, Wisconsin, Illinois and Iowa.

Chances are, if you see a pole building in the area that has an FS tag on it, it’s probably a Walters building?

That’s correct. We’ve had this office going for three years this August, and it’s been going great. We built a great, heavy-built barn.

Do you do more agricultural or residential these days, or is it a 50/50 split?

It’s starting to split a little bit, these days, with all these post frame homes. They’re becoming very popular. We have two that we’re building this year, one in Tuscola and one southwest of Urbana. We also do a lot of ag, a lot of famer’s buildings also. They’re both good.

Were those just for agricultural applications?

One of them was Steve Winkler Chevrolet, in Paris. That entire building was a Walters project, years ago. We did an 80×80 in Tuscola.

What’s the smallest one you’ve ever done?

Are material prices as bad as I’ve heard?

They are, and that’s not just in pole buildings, that in homes and all types of construction.

Do you see that ever coming back down?

That’s a trick question! <laughs> It’s like I tell everyone, play the lotto! Sometimes you win, sometimes you don’t. <smiles>

What’s the best part of your job?

I like it because I get to work outside. I get to travel all over and we’re not in one place very long. They’re good barns. I’m not going to the cheapest guy out there, but I don’t want to be, either.

Are you one of those guys who drives your family by and says, “I built that one?”

Well sure! <smiles> Not so much anymore, but I’ve got crew guys that still do that. They’re proud of their buildings. I enjoy this. I enjoy doing it and working with customers. I have fun. It’s easy to do when you know what you’re doing.

Do you think that the future holds more of the post frame homes?

I’ve got 5000 hours of work already on the books, and I’m working on several more. I don’t see it slowing down. I would have told you a year and a half ago that we were going to crash, but it isn’t happening. Money’s cheap right now, I guess.

Do you see yourself moving more toward the home side, or do you think you’ll stay with the barns?

We’ll do a couple homes a year. There’s a lot of involvement, with subcontractors and all that, and an 80×120 for a farmer, two weeks and you’re out of there. Those are things I’m more interested in. There seems to be a lot of leads, a lot of bidding, and a lot of people who are buying.

Did the pandemic bring you to a slowdown?

For the most part, we went right through it. There were some instances where our guys got exposed to it and had to sit out for two weeks or whatever, but company-wide, people were still building barns.

That’s interesting to me.

It is to me too, but my theory is that at the beginning of the pandemic, if you went into a lumber yard, you saw that there was no lumber in there. There was no treated lumber in there. People were at home and weren’t working. The construction industry was stressed because we were considered essential and never stopped working, and everyone that got sent home started doing home projects. They were at home, and they got stimulus money, so they were going out and buying materials and building the fence or remodel this kitchen that we’ve been putting off, so the materials were going places they had never gone. I’ve been doing a lot of bids where the people said they wanted to wait, but now they’re realizing that waiting is costing them an additional ten percent. We get a report every week, and lumber prices are back on the rise. Steel prices are back on the rise. Steel prices went up 78 percent last year. The same coil stock we bought now costs us one and a half times what it used to. The one cost that hasn’t changed is all of this as far as pricing goes is labor. The difference is all in the materials.

In order to find enough workers, do you think you’re going to have to continue to increase salaries?

We’re paying 20-30 dollars an hour to start, depending on your level of experience, so I don’t think we’re too far along? If we continue raising salaries, we’ll continue to see higher prices. Fifteen dollars an hour now has less spending power than the eleven dollars an hour you were making, with prices where they are.

How much longer do you think you’re going to continue working for Walters?

I hope I have another ten years in me, anyway. I still work on the crew; I still swing a hammer and I still go out and help.

We do commercial jobs. We’ve done Silver’s machine shop and CU woodworking, out by Parkland. Those are both mine. Those are all Walters buildings. They’re all around. I was in the Carpenter’s union back in the nineties, and I worked seven months (out of a year) because work crashed. I went back to building pole barns and I’ve been busy all year round ever since. I started out as third man on the crew, and I’m regional vice president now. I never went to college; I just worked my way up. It’s been good to me.