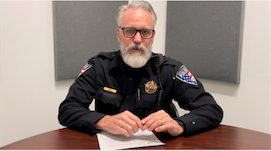 By Tony Hooker
The trip from Champaign to Villa Grove is about 22 miles, give or take.

The trip from retired Champaign Police Lieutenant to Chief of Police for the city of Villa Grove probably seems much longer at times to Robert Rea, who made that journey nearly two years ago. I recently sat down with Chief Rea to discuss his first two years on the job, both the good and the not so good.

You’ve implemented a lot of changes and policy updates since you became chief. Are you nearing the end of that?

What are some of the biggest surprises, both good and bad, that you’ve faced?

The biggest surprise was that I didn’t know how much was needed. There was a lot that I was used to from where I was before, like you mentioned, the policies and technology, which wasn’t here. So, we developed some standard policies and procedures and developed a records management system for report writing and things like that. It’s a lot easier to gather data. It’s a small town, but you still want to be able to track trends and sprees that can help you. You want to know if you’re continually dealing with people at the same location, you want to be able to track those things quickly on a computer and not just have them on a notepad. That surprised me, and I thought I would be more successful in cleaning up the ordinance violations. I was a bit naïve, thinking I would come in and see a problem and solve it. It’s more time consuming than I realized.

Would you say that you’re succeeding in that area?

In the area of ordinance violations? For the most part, but I like to see results, and I’m by nature an impatient person <looks and wife, Stacey and both laugh> so I want to see things move more quickly. I do understand that things don’t always move at the pace I want.

Do you feel like the community has supported you and had your back?

Absolutely. I get compliments all the time, not about me but about the department and the officers. Rarely do I get a negative comment. It’s always about them saying how much they love seeing the officers on patrol in their neighborhoods. That was one of the things that I’ve stressed to the guys. They should be visible in all of the neighborhoods, all of the time, and it’s working. That’s one of the most common compliments I’ve gotten since I’ve become chief.

You seem to have really focused on the professionalism aspect of the force, things like the uniforms being alike, right?

Are there any new things coming for the department that you would like to discuss?

We’re getting the SRO program back, and that was delayed basically because there were no openings at the Police Training Institute to send someone to. We came into a position where starting in May, we’ll be able to get someone hired and to get someone into the schools. Since that role is vacant, I’ve been trying to fill it, by going out to the school in the morning. That’s another thing that parents are very complimentary of. They love seeing the police car there. They love seeing the officer there in the morning when the kids come to school. That’s important.

It’s about building relationships, getting to know the people that are there. We don’t want kids to be afraid of the cops. One of the worst things that a parent can say to their child when a cop’s there is that we’re going to take them to jail or wanting us to come over and scare their kid because they’ve done something wrong. We don’t want to do that. We want the kids to like us, not to scare them. That’s the parent’s job, not the police. <smiles>

You’ve done some pretty extensive remodeling to the station. Has that gone pretty well?

Yes. I’m pretty happy with that. Before, it was just a big room, and storage area. Now we have some office space, we have a reception area and an interview room where our officers can come in and interview people. Other agencies can come in and have some privacy when interviewing people and before that wasn’t available. Our reception area is secure now. We don’t have to worry about anyone getting to Beth and messing with her.

Are there any other changes that you foresee?

Nothing major. I want to keep things together as much as I can. I don’t want a lot of turnover with employees. It’s tough because other area towns pay quite a bit more. I want to keep them here as long as possible and right now, we’ve got a pretty good group of guys, and we’ve been together for almost two years now.

How many agencies have you worked for?

Arcola, Champaign, a short time in Thomasboro and here.

That covers a couple decades, right? Do you have a roadmap for when this ends or do you feel that as long as you feel healthy, you’ll keep working?

I will admit that I’m older now and may not have the same confidence in my physical abilities, but I still have it upstairs, so I’ll keep going for a while.

How about your relationship with the mayor and the council?

I think you guys have been great, and I’m not just saying that because you’re sitting here. I think you understood that changes and improvements needed to be made. You’ve trusted me in the decisions I’ve made and so far, we’ve had a pretty good relationship. You <the council> seem to understand that I’m not going to waste the city’s money, and all the decisions we’ve made have worked out, so far.

So, in a volleyball game, cops vs. fire department, who’s winning?

Cops! <laughs> When I was at Champaign, we had “Guns n Hoses” football between the police and fire departments. It was great, but I blew out a hammy doing that! <smiles>

Of course, you did!

Let’s talk about your family, a bit.

I’ve been married for 28 years; I have a 26-year-old son who is getting ready to graduate from Eastern after four years there and four years in the military. I’ve got a daughter and two grandchildren down in Kentucky. He’s studying data management and she works for an oral surgeon.

They didn’t want to follow in dad’s footsteps into law enforcement.