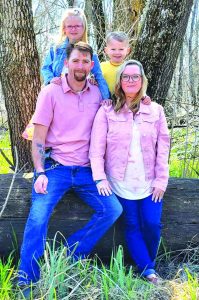 Unfortunately, a very cute, active, sweet little girl from right here in Villa Grove is one of the 40,000. Mikayla Crawford, the daughter of Mitch and Amanda Crawford, is one shy, yet sassy, little girl who is preparing to have surgery to lengthen one of her legs, and I recently sat down with her parents to discuss a fundraiser that is happening on April 2 from 4-7 at the VFW in Villa Grove, to help assist them with the costs associated with the surgery and subsequent physical therapy that she will need.

Where did the idea for this fundraiser come from?

<MC> That was all her idea.

<AC> At first, we were going to have to stay in St. Louis for 50-70 days, and so that would have been a hotel stay. Now, we’ve found someone close for therapy, but they don’t take our insurance, so it’s going to be all out of pocket. So, that kind of pushed us toward doing a fundraiser because we wouldn’t have been able to fully do all of it.

What is the condition called and can you give me a little more information about it?

<AC> Fibular Hemimelia. She was born with one leg shorter. We thought it was just from the knee down, but the knee up is just a little bit shorter as well. In most cases, the smaller bone in the lower leg is missing, but she does have hers, so that’s why we’ve decided to go our route with everything. She only has three toes, and she’s missing ankle bones and a couple bones in her foot.

I’m sure you’ve become an expert on this condition. Is this something that is common or very rare?

When did you find out that she was stricken with this condition, at birth?

No, we noticed at the 20-week sonogram that one leg was shorter than the other. We didn’t notice that she had toes missing until she was born.

And you’re from Villa Grove as well?

Oh, so you’re a Jamaica or Salt Fork grad?

<AC> It was Jamaica then. It turned into Salt Fork about two years before I graduated!

When did you graduate from VG?

Let’s talk a little bit more about the event on April 2. Exactly what’s going on?

<AC> We have a spaghetti dinner from 4-7 so that will be the whole time. We were going to just do a silent auction, but we’ve gotten so many donations that we’ve decided to do a live auction as well. The silent auction will be from 4-6:30, and then we’ll wrap that up and then starting at 7, we’ll have a live auction with quilts and things like that. We’ll have a cash raffle during the event. We’ll also be offering take out for folks who just want to do that. Per her (Mikayla’s) request there will also be a kiddie section where there will be crafts that they can make. They can color Easter eggs, kinetic sand and she wants a game table, so that there will be lots of things for kids to do. She sent a flyer home to all of her classmates!

Who’s in charge of that?

It’s simple things, so I don’t know how much direct supervision will be required, but I plan on helping with it. It will be mostly her (indicates Mikayla) probably! <laughs>

How many people have stepped up for you?

<MC> We can’t count on all of our hands and feet!

<AC> I have a huge list, and I would say probably at least fifty.

<MC> And they’re still coming in.

Is the auxiliary helping with the Spaghetti Dinner?

<MC> The big thing for us is that the VFW has come together and decided that they will offer us 10 percent of all sales from the bar that night. Brandi, the manager, is going to have a Dj service that night after our event.

<AC> That’s after our event, and I feel that the music will help pull people in. She has been a very big help.

You’ve got plenty of volunteers with the serving and all of that?

<MC> We’ve had a lot of our family step up. My mom is on the auxiliary and she’s going to take care of all the cooking. My grandpa is going to be serving.

<AC> We may need a few more servers to step up.

<AC> Honestly, we have pretty much tried to cover our bases. His mom has helped do spaghetti dinners with the auxiliary, so she pretty much knew what to do. They also have a book that they go by to know how much to serve. They knew how much to get to serve the expected number of customers.

How many pounds of ingredients do you expect to use?

<AC> The entire meal, from the time that I created her group and I posted that we were going to do this benefit, was completely covered in less than 24 hours. All the teachers at the school got together and some are doing the bread, and some are doing the paper products. We haven’t had to do anything for the meal.

<AC> Amber Osborne’s husband is making a selection of pies and puddings and cobblers and stuff and they’re going to bring that to us.

When you were beginning to plan this, did you have any idea that it would grow like this?

<AC> No, I was worried that it wasn’t going to pick up. I know that the community always pulls together, we’ve seen it.

<MC> I’ve lived in Villa Grove, and everyone always comes together.

That’s a nice problem to have.

Is there anything that I haven’t asked? Anything we need to talk about?

<AC> For her, surgery-wise, what we’re going for from the benefit, if we’re able to stay here and do therapy locally, she will still have to go to St. Louis weekly, so that is one of the main things this fundraiser will address. We’ll be down there for two weeks after her surgery, which will pull him out of work, and if for some reason Tuscola doesn’t work for us, we’ll be there for 70 days. That’s what we’re pushing for. The frame that is on the flyer will have to remain in place (on her leg) for six months. After the eight weeks of lengthening, the frame will have to stay on to help strengthen the bone.

Is she aware of what’s going on?

<AC> She is. Of course, she’s nervous, but we talk about everything. If people have questions, she knows.

<AC> She’s excited because right now, her lift is 2.5 inches. Once we get done, if we get what we can out of it, her lift will only be about a quarter of an inch inside of her shoe. That’s what she’s excited about because she’ll be able to run!