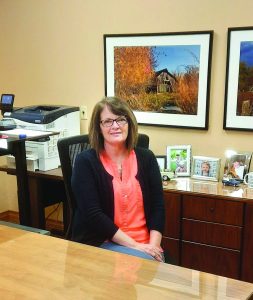 By Tony Hooker
Lisa Corum was sitting there in Stewardson-Strasburg high school as a high school senior, contemplating a future in medicine or perhaps computers. Now, over three decades later, she’s nearing completion of her first month as President of the Villa Grove State Bank. I recently caught up with her to find out how her career took such a direction and to get to know a little more about her.

In the Stewardson Strasburg area.

I’ll ask you the same question I asked Don, recently. You’re sitting in math class your senior year, thinking to yourself “Someday I’m going to be the President of the Villa Grove State Bank,” right?

Absolutely not! <smiles> It was never on the radar, especially in high school.

So, what led you to your career in banking?

Actually, I was asked to join a bank in 1988. I knew the family who ran the bank and they asked me if I’d be interested in working there because they knew what I was doing, or what I wasn’t doing, and they asked me to join. I had no indication whatsoever that that’s what I wanted to do.

You started out as a teller?

Yes, I’ve done everything. I started out as a teller and ended up leaving there in 2014 more on the loan side than what I’ve been doing here.

It’s just been a natural progression for you then?

I’ve done pretty much everything. When I left there, I was Vice President, and came here and kept that role.

I think that progression is really cool. Do you think that starting and working your way from the ground up gives you a unique perspective as a manager?

I feel that experience in banking is almost more important than sitting in a classroom listening. I think everyone should start out at a teller or a bookkeeping position and work their way up so that they can understand the total workings of the bank.

With that being said, did you go to school specific to banking?

I did not. I went to junior college and decided I wanted to have a family so I kind of put that (college) on the back burner. I got the position and then continued my education through the banking system. As a banker, there are several educational options you can go through, banking school, and I went that path.

Where do you live now?

I live in rural Tuscola.

And do you have a family?

I do. My husband and I have five children between us and almost eight grandchildren! <smiles> We have seven right now, with another on the way.

So, your roots are firmly here in Douglas County?

What bank did you work at previously?

It started out as Stewardson National Bank, and then we changed our name to Prairie National, and after I left it was bought out by Waterloo.

What do you like to do when you’re not at work?

I obviously like spending time with the grandchildren and all the kids. I am very outdoorsy. In the summertime, I spend a lot of time planting, gardening and landscaping.

What’s been the most pleasant surprise as you’ve moved into your role as bank president?

The acceptance of everyone here. It helped a lot knowing everyone. It wasn’t a big shock to everyone’s system because we didn’t pull someone in from the outside. Everyone was comfortable with me, I hope, already so that was really reassuring, knowing that it was going to work, and I was going to fit, because I have some very huge shoes to fill.

Has there been anything that you weren’t expecting?

Not yet, but I’ve only been at the helm since the end of January. So far, so good!

What’s been the biggest change in the industry since you began your career?

Regulations. It just seems like they pour more regulations on, every day. I think if you ask any banker, that would be it. The regulations we have to abide by sometimes tie our hands in some areas, but I understand that they do it to protect the consumers.

Technology would be second, yes. The technology doesn’t bother me as much because I understand it pretty well. The regulations, to me have the bigger impact for bankers.

Do you see any major changes coming down the pike for the Villa Grove State Bank?

Not even any little tweaks or changes?

No, we’re going to continue to expand our community involvement and try our hardest to keep out customers and our board happy and go from there.

What about the bank itself? Do you see it expanding the services it offers?

And the community has been very accepting of you in your new role?

Yes. I get a lot of funny comments from customers about someone with hair sitting in this office! <laughs> A lot of people have stopped by to say hi and wish me luck and congratulate me. Honestly, I don’t know if a lot of people have seen me. I did a lot of the regulatory work so not everyone knew who I was, but the people who did tend to stop in and talk to me.

I think the bank is in great hands, and I appreciate your time.