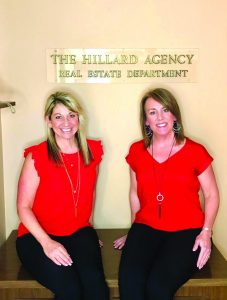 By Tony Hooker
Rebekah and Tish. Tish and Rebekah. For the better part of the last two decades, Tish Gulick and Rebekah Hopkins have been best friends and business partners, to be sure. But they’ve also been witness to each other’s relationship with God and with their families. These two have gone through life’s triumphs and tragedies together, and they don’t plan on stopping any time soon. I recently caught up with the Chix in Training founders, to see what the next chapter, their budding careers as insurance producers at the Hillard Agency in Tuscola, might hold for them.

These days, it’s hard to say Tish or Rebekah without saying the other person’s name, isn’t it?

(TG) We consider ourselves to have been blessed by a really cool, inspired friendship.

How did you guys meet?

(TG) It’s kind of funny, but when Greg and I were living in Michigan, my nephew, Lucas, came up and said “You have to meet my best friend’s aunt. You guys are so much alike,” and that was before we even moved here. He was talking about Pat Lake and Rebekah. All he said was “You guys would be such great friends.” I ended up moving into the neighborhood that she was in, there were only a few houses in Pheasant Pointe, she could see my house and I could see hers.

The interest in fitness and training came to you individually?

(RH) No, we’ve always been doing something. I had worked at Gold’s Gym, teaching aerobics, and I had the studio above Sid’s (Sid Shanks) business office, and I had that going. I was doing that before Tish moved in.

(TG) We both liked running, and that’s what Lucas was saying. I had done a half marathon at that point, and we just started training together.

(TG) We found through our friendship and being young moms that we both loved the Lord. We started a women’s bible study, which became the children’s after school program in town. We did that for four or five years. We kind of incorporated the fitness with the bible study in the after-school program, and then we said, “You know what, we really want to hit the mom population here in town, because they’re the ones buying the food,” and that’s how Chix in Training got started.

How many Chix groups are there now?

(TG) Actually, it’s kind of been an evolution. At one time, we had 12 locations and that’s what we really focused on, which was a great thing. We were just talking about how many camps and things we’ve done. Because of Covid and a few other things, I think we’ve just kind of organically moved to concentration on what we’re doing. We have a video series online, and we’re going to continue to move in that direction too because we can hit so many locations, but right now, we have Champaign, Savoy and Villa Grove.

I don’t want to call them clients, because I don’t think you think of them like that, but how many folks do you think you’ve reached over the years?

(RH) I’m not really sure. Between all the locations, a thousand? (TG) Thousands! (RH) That sounds really weird to say! <both laugh>

That’s pretty amazing. Have you ever thought about that?

(TG) It’s like you said. You don’t know the impact and how that ripples down. I think the thing that syncs our friendship is the fact that we never believed that this was just a business. It was a business ministry, always. It was always an outlet that God was leading us to, and we were just doing what we were told, do you know what I mean? I think that managing that aspect of business and ministry and keeping true to it, where we’ve turned down a lot of money because we didn’t feel like it was right, opportunities where people couldn’t understand why we wouldn’t do it, we were like “Yeah, that’s not why we’re doing this,” and we can really see this, looking back over the last 15 years of Chix. Those were the right calls.

(RH) Until you take the time to reflect back, I tend to forget about some of these things because I’ve already moved on.

So, you’re empty nesters these days, ladies? Is that kind of what compelled this latest chapter?

(RH) Yes, just filling the time and learning something new, finding something we could do together so we could continue doing Chix the way we want to do it. We can still schedule in that capacity but move on to something else.

(TG) We’ve always been looking for new experiences so we can continue to learn and grow and pursue things. We want to keep doing this, but that requires that we work part time, so we wanted to have that balance and keep learning, and growing. <smiling> >Maybe put on nice clothes and do our hair (RH, smiling) and some lip gloss!

(TG) It’s different because we started the business because we wanted to be home with our families, and we did our job! We were wanting to try something different, but we weren’t sure what that was. We started at the U of I, but it was a different mindset than when you run your own company, and we wanted to do something where we could have an impact.

Let’s talk about that. Did you get your producer’s license?

(TG) We got our Property and Casualty license. We love John, but probably ten years ago, he reached out through Greg and wanted to hire me. He’s just got this quiet, pursuing way, a really sweet, subtle way and he said that we should talk. One of the things we’ve been working on for probably the past 10 years is in the category of finances. Fitness and finance go hand in hand. We believe wholeheartedly in having a fit, healthy life and in helping people pursue that. Being stay at home moms and business owners, and to be free enough to be home with our families and to love and serve and be free enough to say, “I’m not going to do this, but I’ll do that because I feel that God is calling us,” so that required getting out of debt, learning about savings and investing, and being financially fit. People, especially women, don’t talk about it much. They often don’t talk about it or even know what questions to ask. That whole thing with women, talking about going from debt free to talking about savings, really life generating thoughts from that perspective, really pursuing and helping women in that category, is where we see ourselves going. Insurance is one the top things that can be a vehicle of (security). Everyone is different, everyone has different needs, and we want to help them understand what they need. Really, that’s what pivoted us. We were going to give it ninety days, because we were of the mindset that we weren’t going to work where we didn’t want to be, and The Hillard Agency is truly unique. Three employees have been there for forty years and watching them work is amazing. I don’t think they know how awesome they are because it’s all they’ve known, but the knowledge they have is amazing.

What’s been something that you weren’t expecting that’s been really positive?

(RH) I think just watching the interaction of this group, the people themselves, are kind of like a little family.

(TG) They’re kind of like “The Office!” They’re hilarious!

(RH) But in the sweetest, kindest, most endearing way. They’ve been so welcoming to us. They’ve been so gracious to us, waiting for us to get our licenses, so we can pitch in and help. So that’s been very cool.

(TG) I think it’s a really unique environment because they do commercial. They do farm. They do real estate. Real estate and insurance used to go hand in hand and they’re one of the few who still offer both. I think everyone wants to help people and have purpose, and they’re this group of people who have been doing this for forty years and they still want to be doing it, and they have so much energy for doing it. You feed off of that. It’s a gift to be around people who love what they’re doing and believe in what they’re doing. When you have an accident, you just want someone to pick up the phone and tell you it’s going to be alright, and Harriet’s (Harriet Holmes) is that person. She’s just doing what she’s called to do and when you’re around that, it’s inspiring.

There won’t be any fighting over commissions, right? <smiling>

(TG) We joke about it. We’re going to get all of the YMCA’s and then we’ll just split the commissions! We don’t care, but it is part of why we’ve put ourselves in this position. For years, when we were young stay at home moms, we drove old cars. We learned to live on one paycheck for a really long time and got really good at it. That’s one thing we would love to share with young families.

(RH) It’s really about taking the pressure off and allowing you to do the things you really want to do.

(TG) It might sound foreign, but we really don’t care about the money. We just want to be in a position to help people.

How long do you think you’ll keep doing what you do? I can’t see you leading the Chix through a workout at 80.

(RH) Bite your tongue! All of our 80-year-old friends will be there!

(RH) We don’t put a limit on anything. That way it just keeps coming.

(TG) I’m 54, and I can say that I’m way smarter. I can still go and crank out an eight minute mile, but I’m much more efficient than I used to be. When you apply wisdom to your knowledge, it’s a beautiful thing. It’s our job to shine bright, and it means different things at different seasons.