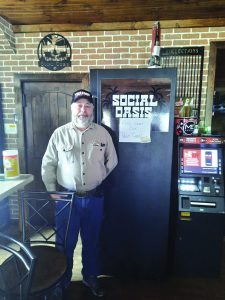 By Tony Hooker
If things had gone a little bit differently, Bruce Allen might have been an attorney.

The courtroom seems quite a ways removed from Bud’s Auto Parts, of which he’s been the owner for the past eight years, or the Social Oasis, his other Villa Grove Business. He also found time to help out around town so much that he was named one of Villa Grove’s volunteers of the year. I had a chance to catch up with Allen, who has recently made the decision to sell his shop, and take his career in a completely different, less stressful direction.

How long did you own Bud’s?

I bought Bud’s in October of 2018, so a little over eight years ago.

What is driving your decision to sell the business?

Last summer was a rough one. I couldn’t find anyone to help and so I ended up doing it all myself, working 14-hour days, and I’m getting too old for that. I decided it was time to find an eight-hour job and live life a little bit.

And you’ve got the Oasis as well?

Yes, my daughter runs the day-to-day operation of that for me.

You graduated from Villa Grove in 1979, right? What did you do after high school?

Right after high school, I was dating a gal from Mahomet, and her dad worked concrete out of the hall, and he told me that he could get me on at the Laborer’s Union and I could work the summer at the Clinton Power Plant and then go to school in the fall. Being an 18-year-old kid, making that big union money, and the SIU Law School never came to be. <smiles> I stayed in the union for about a year and then went to the University of Illinois and stayed there about 12 years. I worked construction for a while. Then I was in the fertilizer business for about 12 years and then I went to work on the railroad. I actually bought Bud’s while I was still working on the railroad, because I had been doing the small engine work here in town since 1994. The guy that I had managing Bud’s got in a car wreck and I had to take a leave of absence from the railroad to run Bud’s full time, so I ended up leaving the railroad. Now I’m going back to where it all started, back in 1979!

The hallowed halls of VGHS!

You’re heavily involved in the community, through the chamber and ag days and everything else. Where does that drive to be involved come from?

I don’t know, I’ve just always been one to try to give back. I got involved in Ag Days twenty or twenty-five years ago with Walburn and all of them. I don’t know, I just like seeing the community thrive. I especially like doing things for the kids, keeping them happy. Kids are where the future is.

Tell me about the mini train.

We built it in the shop. Barry Price, Chris Walburn and I built it and it’s turned out to be a lot of fun. Unfortunately, the year we finished it, covid hit and we weren’t able to take it out much, <smiles> but we even take it down to Brocton for the kiddie tractor pull stuff. We took it down there and it was non-stop for about three hours. It’s nice to get the kids involved.

Now your career has taken a different turn and you’re working at the school. How did that come about?

That’s a real good question! <smiles> Like I said, I’d been thinking about it since last summer and I always joked around with the guys coming into the shop that I was going to retire, and Steve Vandeventer was needing bus drivers and that’s what originally got me on their website. When I was on there, I saw that they also had a custodian’s position advertised and I decided to pull the trigger and do it. I went out and talked to Mrs. Munson and Jack and took the position.

You hit the big six oh this year, right?

How are things going at the Oasis?

We’re doing good. We went through our spell during the pandemic, just like all the other businesses but things have bounced back. That’s the one thing about Villa Grove, it’s very resilient. If anything, covid may have helped our town businesses because people weren’t commuting back and forth to Champaign anymore. I think people finally realized that Villa Grove has a lot to offer. They weren’t going to Champaign, so they were forced to do their shopping here and a lot of those people have stayed loyal to what we’re offering.

Are there any events on the horizon with the chamber?

Nothing really new. We’ve got the Jonah Fish Fry in September. We’ll get the pork burger trailer back out when the weather breaks, we had a good summer with that last year. We’ll have the kids’ fishing derby in June.

That really seems to be growing, right?

It is growing. We had more kids last year than ever, after having to skip 2020 because of the COVID. I forget the numbers, but it was bigger than we ever had. The chamber provides hot dogs and water and bait for the kids, everything’s free. All kids from 5-16 have to do is come out there and have fun.

Has anyone ever caught any good-sized fish during the derby?

No, but they catch a lot of them! <laughs> There are some local kids who fish out there about every day during the summer. We give prizes in every age group for the biggest fish and the most fish, and we finally stopped counting when they reached seventy or eighty catches. <laughs>

They say there are some big ones in there.

There probably are some good-sized catfish in there.

What are you going to do with all your free time when the shop changes hands?

It has sold. Cassandra (Eversole Gunter) got it listed and I think it was on the market for two days. She’s very proactive in reaching out to people. I don’t think I can say who is buying it, but it was very important to Cassandra and that first and foremost I wanted to see a business in the building. I’ve got customers that date back all the way to 1994 and I hated to leave them. I wanted to have someone in there that was going to take it over. Basically, all you’re going to see changing at Bud’s auto parts is the name of the business and the face behind the counter. I’m going to stay with him until he feels good and comfortable. He’ll do well, offering the same services we’ve offered.

Your daughter Melanie is running the business for you?

She lives right here, so it would be tough for her to call in sick! <laughs> she’s my only daughter, but I do have three grandkids, a boy and two girls.

Is there anything I forgot to ask about?

Ag Days are coming up. We’ll be starting the planning meetings for that soon. You know how that is.

The unfortunate thing is that there are a lot of things going on behind the scenes, stuff people don’t even think about that one of our key players, Donnie Dixon, used to do. It’s getting tougher and tougher to find people to help, and that’s why a lot of these small festivals are dying out. I will say that Callie Parr out there at the school has the FFA helping with a lot of events that the Chamber puts on. I really want to give a shout out for what those FFA kids do. They really help out. They helped out a lot at Ag Days last year. That’s what it takes. We need to get the younger people involved in these events so that us old farts can step away! <laughs> What the younger generation wants in Ag Days could be completely different than what we’ve done in the past. I wish we could just get more of them involved.