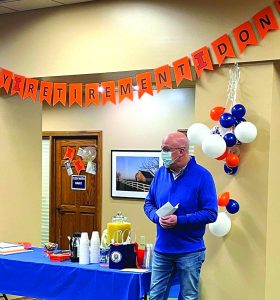 Photo: Villa Grove State Bank
Villa Grove State Bank celebrated the successful 35+ year career of Don Cler on January 28 upon his retirement from president. Don will still be representing the bank remotely as Senior Loan Consultant managing and building a portion of their loan portfolio. He will also retain his spot on the Board of Directors continuing as one of the leaders the bank.

By Tony Hooker
When Don Cler was attending Unity High School in the late seventies, he had no idea he would have a four-decade career in banking. In fact, upon graduation from EIU with a bachelor’s in economics, his path still wasn’t clear. I spoke with Don, who recently ended his time as President of the Villa Grove State Bank, about how he came to work in the industry he served so admirably, what his plans for retirement are, and so much more.

There you are, sitting in Unity High School in May of 1979, thinking to yourself “Someday I’m going to be the president of Villa Grove State Bank.” Is that how it worked?

<laughing> That’s mighty far from how it worked! I really wasn’t sure what I wanted to do, and if you talk to my friends and classmates, being a bank president is probably the last thing any of us would have thought I would do.

What were your dreams back then?

I really didn’t have a clue about what I wanted to do. I knew I wanted to go to Parkland for at least a year and play baseball there and then go from there and see what happened.

Did you end up playing for the Cobras?

I walked on and made the team and ended up redshirting my freshman year. Then I transferred to Eastern. I realized I wasn’t going to make any money playing baseball, so I figured I better focus on my education. I love baseball and I made some good friends at Parkland when I was on the team. It was a good experience, but it was time to move on.

After you transferred to Eastern, how did your career thoughts and training progress? Did banking kind of develop organically for you through your coursework?

I was an econ major, so the courses were business related courses. I enjoyed the banking aspect of it, so I was thinking maybe that might be an option, but the day I graduated I still wasn’t sure. Kind of what got me started on this path was going back to grad school to get my MBA. I started working part-time in the trust department at Boatman’s bank. There was a gentleman there who was a family friend who ran the department, and he hired me part time, and it evolved into full time.

No, I took a couple of years off between my bachelor’s and Grad school, so it would have been around 1986.

And what did you do for those two years?

I did odd jobs. I sold insurance for a while. I did construction for a while, just some odds and ends. I was working at the Clinton Power Plant as an Iron Worker permit, working on the sides of the containment building in the freezing cold, and the thought crossed my mind that I didn’t want to do this all my life! <laughs>

When did you come to Villa Grove?

I came to Villa Grove in November of 1987. I knew a good family friend of ours was a director at the First National Bank, so I called him and got an interview and ended up getting the job.

And then First National and the State Bank consolidated?

What was your initial position with the bank?

I was an assistant vice president. My main responsibility was in the loan side of the bank, mainly, until I took over as president of the bank.

How long were you president?

Is it going to be easy for you to walk away? Are you going to keep a finger in it? What’s your plan, moving forward?

It’s going to be a gradual process. I’ve retired as president, and I’ve given up all of the management and administrative responsibilities, but I am going to continue working on the commercial loan side, mainly with some customers that I’ve developed relationships with over the years. I think it’s going to be a good opportunity for me to ease out of the workforce, rather than just stopping cold turkey. Jeff McCown and I talked extensively about this, and were able to create this position. To be honest with you, neither one of us really knows what this is going to look like. We’ll get together in six months and have a better idea.

Who will be assuming your role as president?

Lisa Corum is the President. She’s been with us for about eight years now, and prior to that, she was at a bank down by Effingham for over 20 years. She had a lot of the responsibilities of being a bank president without having the actual title, so she’s very qualified and I’m very confident that she’ll do a great job.

<laughing> I won’t get to a 29, but I do hope to improve my golf game a little bit. Traveling is definitely on the agenda. We have a son who lives in Paris, France. We plan to visit him a little more often. Our other son is up by Chicago, and we plan to visit him more often as well. We have family all around the country and we plan to travel around and see them and see parts of the country we’ve not yet been able to visit.

Thank you. I appreciate that very much. It’s been a very good ride. Again, I never dreamed that I would end up in a position like that and it’s been very good. I can’t take credit for the success of the bank. I’ve had an unbelievable staff to work with. They have made my job much easier, and there’s no way one person could do it without a fantastic group around them, and I’ve been blessed with some wonderful people to work with. I’ve told a lot of people that one of the best parts of the job is that over the years, a lot of our customers have become good friends. So many of the people that walk in the door will pop their head in and say “hey”, or I’ll walk out in the lobby and greet people. The relationships have just been unbelievable and that will continue as we move forward.

Those relationships are probably a high point of your career, right?

No doubt about it. When I was offered the position, one of the first questions I asked was about not wanting to be a bank president who sits in the corner. Budge McCown, the owner of the bank at that time, was 100 percent in agreement, and his family has continued to support that belief.

I can’t say enough about how much you and your institution have done for the city. A lot of times, it’s behind the scenes, but you’ve always been standing up for us.

I appreciate that. The school and the city and local businesses all have to work together in a small community like this. I remember years ago, the board told me that if the school or the city needs something, that I should find a way to make it happen, and I’ve always tried to do that.