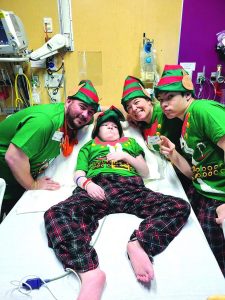 By Tony Hooker
Phil Gawthorp works incredibly hard to take care of his family, of this there is no doubt.

There is also no doubt that fate has made it clear that on occasion he and his wife, Jessie, can use a hand, just like all of us at various times in our lives. I recently caught up with Phil, along with his sister Joy and the amazing crew of the Korner Beehive, to talk about his situation and the plan for helping him face it.

You don’t seem comfortable talking about your situation. Would that be a fair assessment?

It’s been a decade plus of playing the cards that we’ve been dealt. Our life story is our life story at this point, and there’s nothing we can change about it. It’s just a matter of keeping our heads above water and finding ways to deal with it.

Where do you think the ability to just lean into the situation comes from for you?

My kids. When Lily was two years old, we got an opportunity to take a “Make a Wish Trip, because Lily wasn’t supposed to see 2-1/2. Last week, she celebrated her 14th birthday, while in the hospital with COVID.

The single toughest woman I know. 1A and 1B with her mother.

Because of Lily’s health issues, your wife can’t really work a regular job, so you’re working all the time to make up the difference. How many times a week do you get to see your family?

Winter is historically the time where I get a little more time to spend with them because Jessie asked me years ago to pick a sport not to do, so I could be home more. Winter was the easiest choice for me. During summer and fall, because with my work schedule, I’m leaving work (at the University of Illinois) and going straight to the school for practice or games. Saturday is kind of our day where I don’t have a lot going on, because I work Sunday through Thursday.

How long has your child been in the hospital?

One hundred and six days, as of today.

And of those 106 days, how often have you seen her?

How is your son, Gavin, taking all of this?

Gavin is very hard headed, and doesn’t speak a lot about it, but you can see through his demeanor at times. He’s a proud mama’s boy, and you can see that not seeing her often is an issue.

I understand that your daughter just had spinal surgery?

We took her up on October 14, and I believe the procedure was on the 15th. They placed three rods and between 23 and 27 screws in her back. It was about an eight-hour procedure.

And she just comes through, right? She just fights through everything.

She is the most resilient person I’ve ever known, especially with this recent bout with COVID-19. My wife should just be given a medical degree at some point because she gives our daughter weekly immuno-infusions. She puts needles in her thighs and does all these procedures just to build up Lily’s immune system because she’s so susceptible to infection.

I’m sure you draw on that will and drive to keep yourself going, right?

What is the best-case scenario for your family getting home and being under one roof?

There is a conference care meeting on Wednesday, but from what Jessie’s being told, early March at the soonest. They have a therapy plan picked out, but they are just now starting to be able to address the post-surgery stuff.

I asked his sister Joy Shanks, who he jokingly refers to as sister-mom, how much she thought all of this cost.

She pointed out that 60 of those days were spent in ICU, so the costs were exorbitant. “They just had to order a special bed for her to come home to that detects her CO2 levels, because they get extraordinarily high when she’s sleeping. She’s going to have to be on oxygen at night, so there are just more expenses that keep adding up.”

<JS> Hundreds of thousands, if not more. She’ll also be receiving at home nursing care three days a week when she comes home.

So that’s really what the point of this entire fundraiser is about, isn’t it?

It really is. Jessie’s not going to be able to work, and the thought is that things will get worse as Lily gets older.

As a postscript to this interview, I met with Mary Hite, Jerry Jenks, Beth Floyd Jenks at the Korner Beehive to discuss some of the things that the family is facing, along with ways that the Beehive and the Villa Grove community can help

How long have you been open?

Seven months! I remember the very first interview I did with you, and you vowed then to give back to veterans and to the community, and you’ve stayed true to your word, right?

<MH> We have, and we are looking to do another fundraiser for a member of the Villa Grove community, and we couldn’t think of a more deserving family than the family of Phil Gawthorp. His family has been through an awful lot.

Do you have any concrete ideas about how this fundraiser will work?

<MH> It is probably going to be similar, but we’re also working with Phil’s sister Joy to try to fund some other things, like items for sale here where the proceeds would go to the family. We are trying to expand what we do and add to what we would normally do.

<JJ> Between Joy and Ronnie and others, they are trying to put the family in a home that will be better for Lily when she comes home from the hospital. So, we are looking at doing something that will help them pay rent or pay the water bill or whatever living expenses they need covered. The idea around it is that we’ve done all these fundraisers in the last six months, we’ve done half a dozen of them, and every one of them have benefited a military cause. We felt like it was time to wrap our arms around a community cause. Hopefully, once we’ve found this cause, someone’s going to come in and say, “my mom needs help.” Our thinking is that by doing one community cause, maybe we can find a second or a third and so on.