By Tony Hooker
How does an acclaimed pianist, with work being featured on both Emmy and Grammy winning recordings, find himself living in Villa Grove? I recently caught up with Chip Stephens, renowned professor of music at UIUC, to ask him about that, and much more.

Chip, where are you from?

I grew up in Ashland, Ohio.

And music has always been the thing for you, right?

No, it really wasn’t. <laughing> My mother made me do it! I have two older brothers and an older sister, and they were hellraisers, and mama wanted to have an artist in the family. My mom and dad were complete opposites in many ways, my dad was an atheist, and my mom was a devout Christian who loved the organ in church, and so she started me on the organ. I was eight years old, and she told me she was going to find someone to teach me how to play the organ. I didn’t even know what it was! She found me a teacher in Mansfield, OH named Gene Love. He and I just hit it off. He was really funny. He was my first music teacher ever, which is invaluable for anyone wanting to learn to play music. You need to find a good teacher because if they have a bad vibe, or their level of expectation is too high, it takes the fun out of it. Mr. Love taught the fundamentals, good technique and if I had a good lesson, he would get out his accordion and he would play it with me. He just had a great way about him, and he lived to be 94 and I stayed in touch with him my whole life. I always went to see him whenever I was back in Ohio.

It’s obvious that you’re an amazing player. Was that talent inherent from the beginning, or something that you had to keep sharpening?

It’s definitely something that I’ve kept sharpening. I’ve worked my butt off. I just had a lot of people when I was first starting who took me under their wing and said “You sound pretty good. Keep it up.” When I think I was around 13 years old, there was a live television show in Cleveland, OH called the Gene Carroll Show and my mom and dad thought it would be a good idea for me to audition for it. My dad went out and bought a van so that he could move the organ, and he built a platform for it. So, I went up and auditioned for it, and they said, “We’d love to have you on,” and it was live television. I was on there about 15 times, I think.

Where did you continue your training after high school?

I started at the University of Cincinnati. You can put this in the paper; I graduated (from high school) with a 2.3 GPA, which sucks, <chuckling> but I auditioned at Berklee College of Music in Boston, the Capital conservatory of music in Columbus, and the University of Cincinnati which they call CCM, the Cincinnati Conservatory of Music. They offered me a full ride scholarship, free tuition, room and board, but I was on academic probation because of my (HS) GPA. The director of Jazz studies at Capital University told my mother after my audition that they would give me a full ride, but then, after he saw my transcripts, he called her and said, “We can’t offer anything!” <laughs> Cincinnati did, but I was on probation and had to maintain a 3.0 and I got a 2.8. I got called into the Dean’s office, I knew this was serious, and he said, “All you had to do was get a 3.0 and you got a 2.8.” I asked what was going to happen, and he told me that if Academia was something I was serious about, I needed to go somewhere and learn how to study. They basically kicked me out. I went home to Ashland, and my mom thought it would be a good idea if I took hotel management, so that spring semester I took hotel management and “how to study in college.” <laughs> But, I also auditioned at Akron. When I was in high school, we had done jazz festivals and I had heard about this guy, his name was Pat Pace, a legendary figure in the Midwest, an incredible pianist, both classical and Jazz. Pat was at my audition, and I got admitted, and long story short, Pat became my second father. He just knew how to handle a 19-year-old stallion without a jockey, if you know what I mean. I had one gear, and that was sixth. I played fast and loud.

Moving forward, how did you come to land on faculty at the University?

Things were changing in my career, because I was teaching adjunct at Youngstown State University in Ohio because I was on the road so much, and I got the vacancy announcement for a faculty position at the University of Colorado at Boulder. The director of Jazz Studies there at Youngstown State was Tony Leonardi, the legendary Bass player, and he was actually my second, second father. I hate to be weird, but he really was. Tony was a great guy, but he was really direct and told it like it was, and when I showed him the vacancy announcement, he said “Chip, you’re too good not to be teaching,” and encouraged me to throw my hat into the ring, and so I did. There were 86 jazz pianists from around the world who had applied for that job, and I won it. I was at Boulder for four years when I got a call from the Director of Jazz Studies here at the U of I, Chip McNeill, saying they were doing a national search for a jazz pianist and asking if I was interested. I was married at the time, and I talked it over with my wife and at first, I told Chip on the phone that I wasn’t interested. Colorado has its own inherent beauty, and it was just a really good gig. Then my and I started talking about it and she said you’d like to be closer to Ohio, so why don’t you just throw your hat in the ring and see what happens. So, I did, and there were 76 jazz pianists who had applied, and I won it. I took the job here at the University of Illinois because of the level of support from upper administration. The Jazz program here has emerged as one of the best jazz programs in the country. The director at the time, Karl Kramer and we were very inordinate compared to other big programs in the fact that we can offer 15, sometimes 17 TA’s, assistantships and fellowships. At the University of Colorado, we had one. I said “I’ll take it! Let’s go!” and I’ve never regretted it for a moment except I miss the topography out there in Colorado. <laughs>

You’ve performed on award winning recordings, correct? Did you win a Grammy?

I didn’t win a Grammy, but I played on a Grammy award winning recording by Arturo Sandoval. I am also on an Emmy winning recording because there’s a movie called “For Love or Country”, about Arturo, and I’m in the movie and on the soundtrack, which won an Emmy. It’s interesting, because I had bifurcated from Arturo’s band because my son Cole was born, and I didn’t want to be one of those dads who was on the road all the time and who wished they’d spent more time with their children. So, I left the band and then Arturo called and asked me to come back, and we ended up winning the Grammy?

Is having a family the reason why you ended up moving to the U of I?

It really is. I wanted security. I’ve talked to so many of my friends in the music industry who just play, and they’ve told me what a struggle it’s been during the pandemic, with no place to play. Deciding to join the faculty at Colorado in 2000 was one of the best decisions I’ve ever made.

As your mentor said, you’ve been able to use your position as professor to teach and influence an entire generation of musicians, right?

That’s absolutely correct. The other thing that’s really cool about my job is that I’m required to maintain my artistic and collaborative profile at the international level. If I don’t, I can love my job.

Did Paul Wirth’s passing have a negative impact on the local jazz scene?

First of all, let me say something about Paul Wirth. He was invaluable to the community. I talked to his son Gibson and his daughter Alexa through that whole thing. One of his employees, Martin Stromberg, and his friend Charlie bought the Rose Bowl, right up the street from the Iron Post, and they’re turning it into a great venue. But I loved Paul. What he did for the community, and especially for those of us at the U of I, giving us an outlet to perform, was invaluable.

How much longer do you see yourself doing this?

That’s a great question, Tony, because I love my colleagues. That’s the thing that’s inordinate about our area. We all get along. We all actually like each other. I could retire today and be comfortable, but man, to do a job where you’re playing with world class musicians on a fairly regular basis, people who we have shared visions about the program, doing juries and auditions together. I’ve never heard anyone say anything that I don’t agree with. It’s a great faculty and I love everybody. I don’t know when I’m going to retire. If I was getting a weird vibe or we had regular divergence of opinions, I could see it, but we all get along. Right now, I have no plans to leave.

Any plans to record?

My most recent recording, with Glenn Wilson, came out in 2020. It’s called Sadness and Soul. It got really great international reviews. Glenn is one of the best Baritone Sax players in the world. I started this organ trio with two of my former students, Jay Ferguson, marvelous drummer, and the guitarist is Jose’ Gobbo. I put this trio together and it’s gone over really well. We did this recording and it’s just come out. People are going to get to hear me play something that they seldom get to hear, because usually they want me to play piano.

I still find it hard to believe that a world-renowned jazz musician, one who has performed on Emmy and Grammy winning recordings, has chosen to live in Villa Grove.

What I love about Villa Grove, and the reason why I moved back, is that I can be a normal person. I’ve had people come up to me and say that they can’t believe that I’m a jazz musician. I’m in the public eye all the time, and I love coming to a place where I can be alone and wear my overalls and just be a redneck and relax. 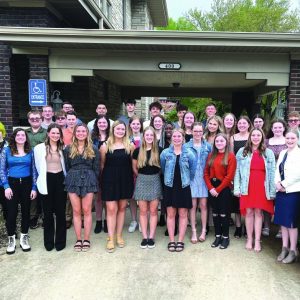 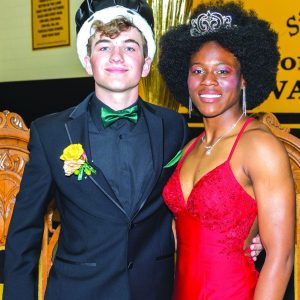 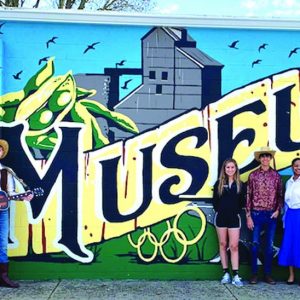 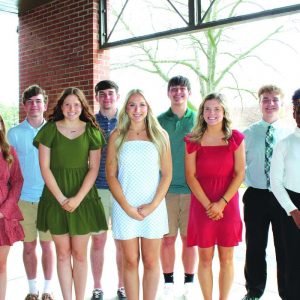