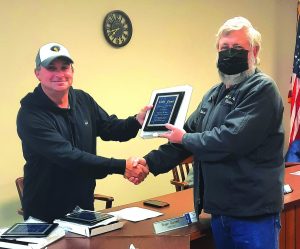 Submitted Photo Bruce Allen accepts his City of Villa Grove volunteer of the year award from Alderman Cheely during the December 27 meeting. 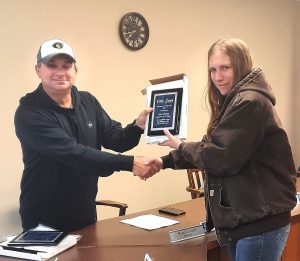 The Villa Grove City Council met on December 27, 2021 for a very short Committee of the Whole meeting.

After calling the meeting to order at 6 p.m., roll was called and all in attendance stood for the Pledge of Allegiance.

Mayor Eversole Gunter then called for Public Comments, and Bruce Allen mentioned that with the pending sale of the water plant, an alternative power source might need to be found since the current source is located in the pump house that will be included in the sale. After a short discussion, it was determined that Public Works director Lake would begin to explore alternative sources.

Mayor Eversole Gunter then moved to discussion of business, which included only one item, the recognition of the 2021 city of Villa Grove Volunteers of the year. In a change from past years, four citizens were recognized for their contributions to the city:

Allen and Green were on hand to receive their plaques and the council gave them a nice ovation as they were awarded by councilman Cheely.

Finding no other business, Alderman Blaney moved to adjourn at 6:08 p.m., with all in favor.