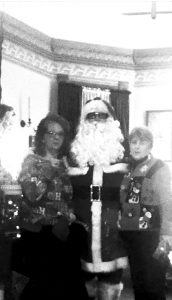 I hope everyone had a good Christmas.

The Coffee girls’ Christmas party was a success; as you can see in the picture my son surprised us in a Santa suit. That is me on the left, Trey/ Santa and friend Gale. Our son wanted to be a professional clown when he grew up and I was scared of clowns so I am thrilled he chose Santa instead. We had ten at the  Coffee Girls party this year, this year, a nice table full and many laughs. I do hope we were all safe, this group sees each other on a daily basis so we did not worry too much.  Our family Christmas was quite nice even though we did not see extended family. We made merry, indeed!

New Year’s Eve is celebrated around the world and I thought you might like to read about how other countries celebrate and a bit of history.

Scotland: “Hogmanay is the Scottish celebration of New Year’s Eve and can last for days—no one celebrates the eve quite like the Scots! It is believed the Scots inherited the celebration of Hogmanay from the Vikings and their celebration of the shortest day of the year. But many believe that as Christmas was virtually banned and not celebrated in Scotland from the end of the 17th century until the 1950s, New Year’s Eve was a good excuse for some revelry and a reason to drink whiskey and eat good food.”

Hogmanay food includes all the traditional foods of Scotland, so expect to find hearty warm dishes as befits this time of year. Up at the top of this list is haggis, sheep organs mixed with oats and seasonings and boiled in a sheep’s stomach. But there will also be other classics such as a cock-a-leekie soup (chicken soup) and hearty, substantial fare like venison pie with a side dish of either Rumbledethumps (potato and vegetable bake) or delicious traditional tatties and neeps (potatoes and turnips). All of these recipes are easy to make and will bring an authentic touch to your New Year’s Eve (https://www.thespruceeats.com/)

Ireland: “New Year’s Eve has changed a lot over the centuries. Some of the Irish traditions of our ancestors have largely fallen by the wayside – although some remain popular to this day. It is a huge event in Ireland, as of course it is all over the world. Nowadays people celebrate the occasion in several ways. In most parts of Ireland it was considered essential to begin the New Year as you meant to go on. That meant following the old adage that cleanliness is next to Godliness. With this in mind, families would set about cleaning the house from top to bottom. The burden of cleaning fell mainly on mothers, with help from the children. Fathers would be unlikely to get involved, although they would be called upon to make any necessary repairs around the house. One of the more unusual traditions involved banging the walls of the house with bread as a way of chasing away bad luck and evil spirits”. (https://ireland-calling.com/irish-new-year-traditions/)

Iceland: “The elves are out! Look for them and you might spot them as they search for a new home. This is the time of the year when they cross the dimensional plane and make themselves visible to us. It all starts with a delicious socialized dinner around 18:00-19:00 with family and/or friends. Delicious meat, caramelized potatoes, red cabbage, peas and Appelsín (orange soda) are among the foods to expect. Once everyone is full and the table has been cleared, it’s time to put on your warm clothes and head out to the nearby Áramótabrenna or the New Year’s bonfire. These normally start around 20:00-20:30, which gives everyone enough time to finish their dinner”.(https://mysticiceland.com/new-years-eve/)

Germany: “Germans call New Year’s Eve “Silvester,” in honor of Pope Sylvester I, who died on December 31, 335. According to the legend, non-believers who were around him choked on fish bones. Some superstitious people therefore state that one shold avoid fish that night, or at least eat it very carefully. Another superstition annuls these fears, however. Carps are considered a lucky charm. This fish is therefore for many Germans a typical Silvester dish. It is believed that keeping a carp scale in your wallet guarantees that it will be filled with cash all year.

Such lucky charms, combined with the good resolutions people like to make for the New Year, are bound to make 2019 an extraordinary year – at least that’s what we wish you all”. (https://www.dw.com/)

Africa: “In Africa and the diaspora, New Year’s Eve holds different meanings for different people, but most come with a feeling of hope and optimism. In Nairobi, Kenya, New Year’s Eve comes with a number of events but one of the most popular is fireworks at the Kenyatta International Convention Centre. In South Africa, Festival of lights is one of the popular end of year activity.  The event, held at Nieu-Bethesda in Cape Town, is seen as powerful symbol of hope and beauty and bringing together people despite their background”.(https://face2faceafrica.com/)

Australia: :Major Australian cities have special New Year’s Eve events that include parades, music, and entertainment. Celebrities are often invited as guests of honor or hosts for large New Year’s Eve events. New Year’s Eve balls are popular and have various themes such as masquerade, black-tie and formal wear, tropical, or gangster and glamour. Prizes for the most intriguing or best-dressed outfits are awarded at these events. Many people also prepare their New Year’s resolutions for the next day.

Many Australians celebrate New Year’s Eve on boat cruises, urban parklands, or beaches. Others hold special parties or barbecues at their own homes. Public countdowns to New Year’s Day are made at large events in major cities, such as Sydney, and are often televised so those at home can join in the celebrations”. (https://knowinsiders.com/)

I don’t know about you but after reading all these traditions, it looks to me like people all around the world are really quite the same. We eat, drink, we like to have fun and fireworks but all we really want is peace and good will.

Food, of course, is of major importance for New Year’s Eve. As a child my Mom, Daddy and I would ring in the New Year with “Bubble Up” soda, “Old English” cheese spread and crackers. Both the “Bubble Up” and cheese spread were expensive in the 1950’s and my parents would splurge. Sometimes Daddy would treat us to boiled ham from the Taylorville “My Store” and that was a real treat. I have a bottle of “Bubble Up” in my pantry and I might just crack it open this year.

My last recipe for 2021 is a family and friends favorite. One of my co-workers served it at one of our Christmas parties in the 1970’s and I have never failed to have it every year since. I serve crab meat dip many times from Thanksgiving to New Years Day. It is easy to fix and always delicious!

Enjoy and be safe in your celebrating.

Place unwrapped packages of cream cheese in a mixing bowl and allow to come to room temperature. Cream, cream cheese until blended.

Add: I whole can crab meat including all juice.

Add: drain all juice from other 2 cans. Note: retain juice if needed, and add meat to cream cheese.

Cream mixture until well blended. If too stiff add a little clam juice to desired texture.