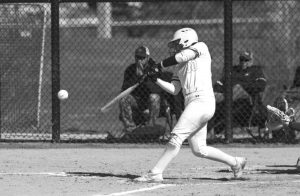 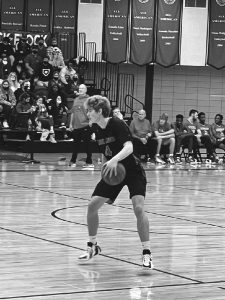 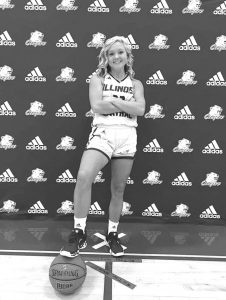 By Tony Hooker
Every year, thousands of athletes move on from the high school ranks, and there are several here in the area who are at varying stages of their career, so I thought it would be good to catch up with them and see how things are going.

You had a great first season at Parkland. Did you see that coming?

I wouldn’t say that I saw it coming, but I do think that I prepared for it.

You were in the top ten in the nation in bombs, (home runs) right?

Your team advanced to the national tournament, so that had to be fun, right?

It was really cool!

Personally, are you going to try to continue at the next level? Is that something you’re shooting for?

Yes, it is. I’m not sure where I’m going to go or what I’m going to do in school yet, but I do plan on playing after Parkland.

What’s been the biggest challenge to you as you begin that process?

Well, the recruiting process hasn’t really started for me yet for my transfer, but I have to say that I’m not looking forward to that, because my high school recruiting process was so stressful. I know I’m going to have to redo that. I don’t have much planned out, which doesn’t help! <laughs>

For a lot of people, there’s a transition period from high school to college athletics, but you just seemed to take off. How would you explain that?

I think that COVID-19 actually might have given me an advantage, school-wise. Everything was online my senior year, so I think I was able to transition pretty well with that. Athletically, I did struggle a little bit. There were times when I was feeling overwhelmed. I knew that college ball would be harder, obviously but I thought that I had prepared for it through travel ball seasons, but nothing really compared to the college season! <laughs> I’d say that I think I transitioned well, but that it took me a little time.

You played with and against a lot of talented girls in travel league, right?

Is the biggest difference the quality of the pitching that you’re facing?

And everyone can rip it, too?

Definitely, I’d say that most teams we play are strong all the way around.

This is kind of a loaded question, in case your coach reads The Journal, but do you feel that Parkland has given you the proper foundation for moving forward to play at a four-year school?

I do think they have. I expected them to because I was able to play for them in travel ball, my junior and senior years. I knew that they have really good connections. They’ve helped me.

We had to delay this interview because you were lifting. Is that something that you did in high school?

I spent some time in the gym in Villa Grove, but nothing compared to this. We lift four or five days a week, which my body was definitely not used to.

Was transitioning to college challenging academically?

I’ve had a couple of challenging courses. In high school, we would do classes via Zoom but here, there isn’t a Zoom, they just sent me the assignment and I completed it, which was a challenge for me. I need someone there, explaining it to me. Sometimes I need to go and sit through class to finish everything.

What’s the next step in your progress?

Spring season! As much as I’m excited about moving on and talking to other schools and basically figuring out my life plan, I’m more looking forward to the spring season. That way I can just focus on the season we’ll see what happens.

Academically, do you have any areas of interest?

Right now, I’m General Studies, but I’m leaning toward kinesiology, something like an occupational or physical therapist.

Very cool. That will play right into your athletics and your career, right?

That’s what I’m hoping! <both laugh>

Is there anything you would like to tell some rising junior or senior who is considering following in your footsteps?

I would probably tell them to relax and let things happen, but also to be consistent and work hard for what you want.

Has it (the transition to college ball) been what you expected it to be?

A little bit, and kind of not, if that makes any sense. It’s a lot of work and dedication and takes up a lot of time, so I guess it kind of is what I expected it to be. It’s all so fun. I’ve got to meet a lot of guys, and my teammates are all great.

I was looking at the roster, and there are players from several different countries on the team, right?

Yeah, they’re from all over the place. It’s been fun getting to know them.

Do you live in an athletic dorm?

Where are they from?

Everett Stubblefield is from Chicago, and Anthony Scales is from Indianapolis.

So, they put you in with kids from the big city?

Everyone’s from a town that’s bigger than Villa Grove! <laughs>

Have you brought them home to Villa Grove?

I haven’t yet. We’ve talked about getting a JR’s steak for some time. I’m looking forward to that.

How about the competition level? Is it about what you expected? How are you acclimating to it?

I was expecting it to be really tough and let me just say that it’s exceeded my expectations! The athleticism and how fast the game is has been completely different than Villa Grove.

Are you adapting to that? Are you coming along, ok?

Are you getting regular playing time? It looks like your team plays at a really fast pace.

How about academically? Is that going smoothly?

It’s going pretty well. It’s a lot different from high school, honestly. There’s a lot more to do and you don’t have as much time, with workouts and practice and everything.

You probably have some good academic advisors and tutors, right?

Yeah, and our coaches are really good about making sure that we’re in study hall. We’re always putting in the hours so I can get my stuff done.

Do you have a holiday break or are you playing in tournaments?

We have a lot of games in December, but I think we have from December 19 to the 25 off so we get a nice little break.

Are you going to try to get out and see the Blue Devils?

I’m sure he would love to have an alumni like you back to visit. Are you planning on moving on to play at a four-year school?

Right now, I’m just focused on Lake Land and this season. I’m just going to take it game by game and year by year and see where it takes me.

That seems like the best way to do it.

How is your first season of college ball going so far?

It’s not been going too bad. I wouldn’t say our record reflects our potential. We’re 2-5, but all of our losses have either been to JUCO division I schools or to division II schools that are ranked ahead of us. We’ve had a really tough schedule and our coach has done that on purpose to prepare us for later in the year when our games really matter.

What has your role been so far? Are you starting or coming off the bench?

I’m coming off the bench. I usually play about half the game, I’d say. I’m continuing to get more minutes as the season has progressed.

You knew that it was going to be a step up in competition level going in. Has it been about what you expected?

I’d say it’s about what I expected. The pace of the game is a lot faster and having a shot clock has been a big change, which I have ended up liking a lot because it speeds up the game a bit. Everyone is bigger, faster and stronger. You’re not playing teams where one or two girls are bigger, faster, stronger, everyone on the whole team is!

How about academically? Is it about what you expected?

Everything’s going well. I like it a lot better than high school because you only have classes two or three times a week, so you get a break and have time to do your work.

Has the overall experience been what you’ve expected?

I didn’t really know what to expect, with practice plans and all of that. Everything was kind of fresh and new and going in not knowing anyone at the school or on the team was a big change for me. Overall, though, I’d say it’s lived up to the hype! <laughs>

Do they have athletic dorms at ICC or are you living in an apartment?

I live in a four-bedroom apartment.

Are you living with teammates?

I live with one of my teammates and two volleyball players.

Where are they from?

One of the volleyball players is from Georgia, and the other one is from LaSalle-Peru. My teammate is from Collinsville.

Have you given your roommates the Villa Grove experience by bringing them home with you?

I have not! <laughs> Our schedules are so busy that when I come home, they usually try to go home, too.

How has focusing on one sport helped your game?

I’m sure that Coach Sappenfield worked you hard, but I would imagine it’s not close to what coach Redeker expects, right?

My team goal is to win a national championship.

Do you want to transfer and play at a four-year school?

I haven’t really thought about it a lot. I just want to focus on ICC and if an opportunity is there, I’d like to try and take it.

Does ICC put a lot of girls into four-year schools?

Thank you and good luck with the rest of your season.