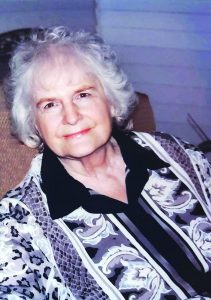 Greg Hoskins, owner of Better Newspapers Inc., and staff wish to express their condolences on the passing of Bev Hastings to the entire Hastings Family.

Beverly Jo Hastings, 88, of Tuscola, IL, passed away Wednesday, November 24, 2021 at home surrounded by her family.

Beverly worked for the Secretary of State in Springfield after graduating from Meredosia High School. Upon arriving in Tuscola she was employed by USI Chemical before starting a 48-year career in the newspaper business in 1968. She served as the office manager and publisher for the Tuscola Review until 2005. She then started the Tuscola Journal in 2006 which she sold in 2016, retiring at the age of 83.

Tuscola Mayor Dan Kleiss said, “I have known the family all my life and for as long as I can remember going through those doors there on Sale Street, Mrs. Hastings would be sitting at that front counter and you would be greeted by her friendly smile and accommodating attitude. She was the Matriarch of news in Tuscola for so many years.  I know she will be missed by her family and the entire Tuscola community.”

My Personal Side
Remembering Mom
By Craig Hastings
Tonight’s column has to be the toughest one I’ve done to date. I have so much I could say but at the same time so much I won’t say. My siblings and I buried our mother this morning. Her health has been deteriorating over the past several months but had kicked into high gear these past three weeks. My sister Tracy had come to Tuscola for a visit not knowing, none of us knowing, how quickly things would evolve. God had a plan and Tracy’s coming home was part of that plan. My sister was our rock through this. She was with mom 24/7 throughout the final weeks, days, then hours. She came to town totally unprepared for the task ahead. We had promised our mother we would do whatever possible to keep her in her own home until the day she passed. With a team effort from family, Hospice providers, and an outstanding in-home care provider we succeeded. Mom had requested a quick and private funeral service and burial. Our family hopes that no one who knew mom was offended for not having a last chance to say goodbye. It was her wish that we not make a “big deal” (her words) when she passed. So we moved quickly and quietly with the arrangements and burial service.

I will only speak for myself of what I have to say tonight. My siblings have their own special memories they may care to share in their own ways if they chose. Mom had just turned 88 years old on November 4th. She comes from a strong family of siblings. She was the youngest of four children and her oldest sister passed before her several years ago at an age older than mom. She has an older sister and brother both in their 90’s that survive her. There was another sister that passed away at a very young age from an illness but, this family was blessed with good genetics for sure. Maybe it was something in the Meredosia, Illinois water. All of the children were bright, ambitious people becoming successful in their own lives as they spread the family throughout the country. Never a single conflict or gossip ridden episode within the family that was ever exposed if there had been.

I couldn’t have had a better upbringing than I did being born, raised, and still living in Tuscola. Our family moved into the Hillcrest subdivision when I was three years old and never moved. I’m still living in this subdivision today just some two hundred yards from mom’s house. My siblings and I lived the ideal “Leave It To Beaver”, “The Brady Bunch” (same parents though), “My Three Sons”, family life comparison adventures any kid could hope for. My mother made this possible and years later I learned how hard she had to work at times to make sure her children were happy. Broken toy, give it to mom to fix, hurt feelings, go to mom to feel better, scrapes and bruises, go see mom to be healed and have the tears wiped away, need gas money, go ask mom for a couple of dollars. Moms are supposed to be able to do everything and we believed ours could.

There’s a hole in my world tonight and I’m trying to figure out how I’m going to fill the void. I feel like maybe I’m too old to do anything big with my life now. My own children keep my glass two thirds full most of the time so I can’t ask more from them. I need to figure this out though because my children are slowly moving into their own lives which I will naturally become less involved…as it should be. Mom and I became even closer than mother/son in 2006. She was determined to get back in the newspaper arena in 2006 and convinced me to become her business partner while I was and still am the police chief here. It would stretch my own free time to its limits but, I was all in. Against all the odds and the steep mountain we had to climb to succeed; we did. We put together an outstanding team of people and did what some told us would be impossible. I was one of those who thought our chances were slim. We marched on for eleven years operating the revived Tuscola Journal until her health began to show first signs of decline. I made the decision to sell even though she really wanted to stay working but she also knew it was time to go home, for good. That didn’t keep her from keeping a close eye on both papers, The Tuscola Review and The Tuscola Journal. She and dad had spent nearly fifty years buying, selling, building, and rebuilding these papers together.

Every single visit I made to her house all she wanted to do was talk about our adventure reviving The Journal and all the hurdles we had to jump to finish the race. It was in my past but, if your mom enjoys that part of her past that much of course I listened and shared my own memories. My mother was a tough, but caring woman. I’ll miss her dearly but she wouldn’t want me to pause my own life for an instant thinking about her….but I will. Love you mom and I can’t wait to see you again.