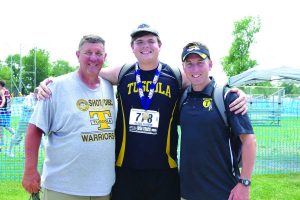 By Lenny Sementi
Tuscola’s own coach Stan Wienke garnered another accolade this past week: the longtime Warrior track coach was selected for induction to the Illinois Track, Field and Cross Country Coaches Association Hall of Fame class of 2022. Wienke has been part of the track family at Tuscola since 1990 assisting early on with all aspects before specializing in throwers where he has left his mark on a Warrior throwing program that collected its first in medals in 1908-09 when Earl Parker took home third and second respectively.

The long time throws coach has 53 state placers between junior high and high school and 17 state champions. At high school level alone he has put 39 on the awards stands at the state meet. His last thrower to reach the top of the podium was Hunter Woodard in the shot put in 2018 following in the footsteps of Jeff Hettinger who won the shot in 1993 and Stephen Gibson a four-time medalist that won the discus in 2015.

Seven of the medalists were inside affairs. Son Judson was all state in the shot in 2011 and daughter Jenna reached the podium in 2002 in the discus. His second daughter is the most decorated thrower in Tuscola history capturing five state medals including two state discus titles besting the state in 2004 and 2006. Grandson Cameron is already turned heads in sixth grade at junior high meets in SJO and will most likely add to the family medal count under grandpa’s tutelage.

As co-head coach he had a hand in ten relays that earned state medals, and teams that brought home three state trophies and nine sectional championships. He was part of a runner-up finish by the girls in 1993 early in his career. He added a pair of third place finishes by the boys in 2008 and 2014.

Wienke is already a hall of famer in the IHSA football community having a hand in four state championship games, including an undefeated 14-0 state championship in 2006. He was a state medalist himself in the discus while in high school at Broadlands and held records in the throws at Eureka College.

Tuscola schools added a congratulations to Wienke, saying, “Stan began working with both the boys and girls teams at Tuscola in 1990 and continues to work with the throwers. A member of Illinois High School Football Coaches Hall of Fame, Stan has coached athletes to 39 IHSA State medals. He has coached 16 boys and 13 girls to State medals in the throws. And as co-head coach, he had ten relays earn State medals. His teams have won three IHSA State trophies and nine Sectional titles. He has hosted numerous conference, Sectional, and invitational meets.

A State medalist in the discus in high school, Stan has been a sought-after authority on coaching the throwing events and has spoken at clinics several times. “His knowledge of the sport, specifically the field events, is evident in the success he has had.” “Coach Wienke has a tremendous rapport with the athletes he works with, both male and female. He is able to move them above even their own expectations.” Throughout his career, “he always saw the good in people.”