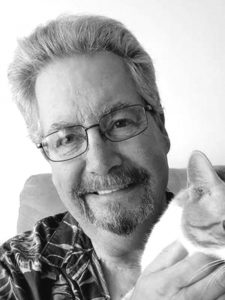 Michael J. Wilson, 65, of Philo received a call from heaven on Saturday (Oct. 23, 2021) stating he was late to the party; his sister, Becky, needed a dance partner for her birthday.

Not only was she waiting, but also his parents, Harold and Betty; nephew, Brian; and beloved dog, Bentley.

Those not invited were his four children and their spouses, Andy Wilson, Heath and Hollie Wilson, Megan and Greg Stamm and Missy Castle; as well as his two brothers, Phil and Rick Wilson; and 11 grandchildren.

Michael was a graduate of Central High School, Class of 1973, and attended Parkland College for small engine repair. He was a loyal, hardworking employee of Philo Township since 1996 to present.

Everyone who knew “Wilson” knew he was the life of the party. If he wasn’t playing the drums, singing karaoke, you could find him in the middle of the dance floor. Wilson didn’t know a stranger. The moment you met him, you smiled, laughed or received a bear hug.

The only thing Wilson loved more than a great party was his family. He enjoyed watching his grandchildren play sports and celebrated the accomplishments of his children. Mikey also enjoyed playing golf with his buddies and helping his friends whenever they needed it.

A visitation was held on Wednesday, Oct. 27, from 5 to 7:30 p.m. at Joines Funeral Home, Villa Grove. Graveside services were held on Thursday, Oct. 28, at 10 a.m. at Grandview Memorial Gardens. Family and close friends were welcome. A celebration of life will be held at a later date.