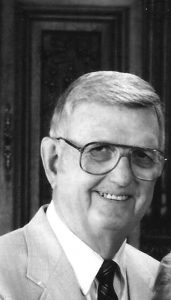 Funeral services were held at 11 a.m. Friday, Oct. 15, at Kirby Funeral Home, 708 S. Main St., Homer, with the Rev. C.W. Greer officiating. Burial took place in G.A.R. Cemetery, Homer. There was a visitation one hour prior to the funeral at the funeral home.

He was also preceded in death by four brothers, Don, Dale, Ralph and Jim Wakefield; and two sisters, Marie McCoy and LaVerne Cook.

Bob was a member of Homer United Methodist Church and was on the Village of Homer Board from 1979 to 1987. He played trumpet in a big-band called “The Has Beens Orchestra,” and he loved big-band music. Bob also loved ballroom dancing with his wife. He enjoyed going to Homer Lake to watch for deer and other wildlife. He also liked playing golf and traveling with his wife to different areas of the country. Bob was a farmer in the Homer area for many years, retiring in 1992.

Memorials can be made to Homer Fire and Rescue or Homer United Methodist Church.