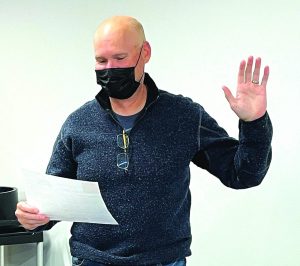 Submitted Photo
Tom Lillard was appointed to fill the vacancy the Villa Grove Board of Education at their October 18 meeting.

By Kendra Hennis
The meeting of the Villa Grove board of education was called to order at 6 p.m. on Monday, October 18.

The first order of buisness was the approval of Tom Lillard to fill the vacancy on the board. Lillard then gave the School Board Member Oath of Office and was officially sworn in.

Superintendent Carol Munson followed with her update to the board. Munson told the board that they were beginning to gather employee input for health insurance. She noted that currently only one employee uses the insurance and there may be no changes. However, they want to be able to get accurate bids if things were to change. Munson then stated that the claim from the lightning strike on August 26 was still open, but that they had made a comprehensive list of damages totaling $12,786.06 thus far. She said there were a few things that still needed fixed, but that most had been started. Munson then informed the board that the district’s electric insurance agreement expired on October 15. Currently, there are extremely high rates for electric insurance so it was recommended that the school just renew on a month to month basis until they go down. She ended stating that all accommodations for the board’s conference in Chicago had been made.

The board then heard junior high and high school principal Sara Jones’ monthly report. Jones began with a congratulations to Liam Barr for being named the October Student of the Month. Jones then gave out multiple thank-you’s to Mrs. Howard and the high school Student Council for the homecoming festivities, as well as to Mrs. Acton for organizing the LPC volleyball tournament last week, to Mrs. Amber Schweighart, Mr. Brian Cordes, and Mrs. Tracy Lillard for organizing and chaperoning the junior high science field trip to Fox Ridge. She additionally thanked Mrs. Parr and the FFA for Ag Field Day, Tom Cler fort the use of his apple press at the event, Ryan Stillman for providing apples, Parkland College for providing their equipment, Shelby Eversole for organizing the pink assembly and fundraiser, Mrs. Malin and Mrs. Osborne for Red Ribbon Week, and Mrs. Cardiff for organizing the variety show. Jones then noted that she met with the JHOC principals to discuss adding potential schools and sports to the conference, and that the faculty really enjoyed their improvement day and speaker Gerry Brooks.

She ended noting some upcoming dates at the school: an early dismissal on October 20, Jimmy Johns for high school students on October 22, parent teacher conferences on October 26 and 28, no school on October 29, Band LPC festival on November 4, junior high dance from 7 to 9 p.m. on November 5, and the fall sports banquet on November 10.

Beck ended announcing upcoming dates at the school: 2 p.m. dismissals on October 20, 26 and 28, parent teacher conferences from 3 to 7 p.m. on October 26 and 28, no school on October 29, PTO fundraiser pickup on November 4, and a PTO Clothing Sale on October 13.

The board also:
* Approved the regular and closed minutes from the September 20 board meeting.

* Adjourned until the November 22 board meeting.

Local businesses can work together