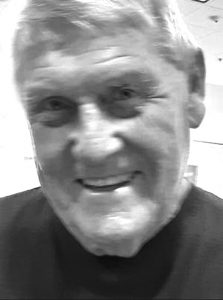 Gary was born Jan. 12, 1941, in Tuscola, a son of Everett Roy and Berniece Chaplin. They preceded him in death.

Graveside memorial services will be held on Saturday, October 16 at in Tuscola cemetary at 10 a.m. Following services, a lunch will be held at the Moose Lodge in Tuscola.

Gary graduated from Tuscola High, where he was in football, basketball and track. He joined the Air Force from 1961-65, where he traveled to Tripoli, Libya, and trained as an aircraft electrician. This is how his work and love of travel started.

He worked for AT&T in Detroit for 39 years, where he became District Manager. After retiring, he worked for communications for Lucent in London, Saudi Arabia, the Netherlands and France.

Family was most important, and he was happy his children graduated from Michigan State and his granddaughter is now in her second year. He looked forward to our yearly Chaplin reunions.

He loved life and enjoyed it with Ginny. His hobbies were golf, karaoke and cooking.