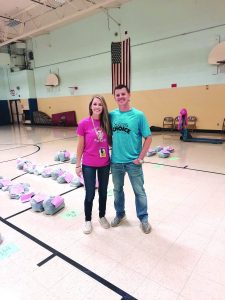 Submitted Photo
Shelby and Jason Eversole distribute “Fight Like a Blue Devil” merchandise at the school.

By Tony Hooker
For the past several years, Villa Grove schools have held “Fight Like a Blue Devil” activities during breast cancer awareness month, in honor of DeDe Eversole, who fought valiantly against the terrible scourge until the very end, when she ultimately lost the fight. To date, over $30,000 dollars has been raised and donated to the Mills Breast Cancer clinic in her name, thanks to the herculean efforts of the event’s organizers. I recently sat down with Shelby Eversole, who currently leads the way, and talked to her about what the fundraiser means to her, her predecessors, and much more.

Is this your first year of involvement?

How did you come to be in charge?

Cassandra (Eversole Gunter) and Betsy (Orwick) have done a great job so when they decided to step back, I didn’t want it to not happen, so I decided to, with their guidance, they’ve been so helpful to me, take it over this year.

And this has a very special meaning to your family, right?

Yes. Our aunt DeDe was the reason that this came about. It started in 2014, I believe, the year that she was diagnosed, and the football team wanted to put pink ribbons on their helmets to honor her and her children, Spenser, Breleigh and Maris. Cassandra and Betsy did a great job of taking it and making it an amazing event, and I’m excited to be involved.

Do you know how much Fight Like a Blue Devil has raised over the years?

What was your biggest challenge in putting this thing together?

The biggest challenge was just trying to make it as big and successful an event as Cassandra and Betsy did. We want it to honor DeDe.

Did you do the assembly and all of those things, too?

Our assembly is Tuesday at 2:00 p.m., because we don’t have school on Friday or Monday, so we pushed it back.

Is there anyone you would like to give a shout out to?

Gosh, there are so many that have helped! <laughs> Cassandra and Betsy have answered so many questions. Shirley Badman and Terri Jones have counted all the money. They sorted all the bags. They’ve done so much behind the scenes that it could not have gotten done without them. Amy Malin helped with the bags also. Dixon Graphics got our order done so quickly! It used to be Weiskamp, but they’ve changed over, and they got everything back to us super-fast! I have to thank the community for participating. They’ve made it a super huge fundraiser this year. Everyone in the school has helped with getting the packets out and getting the order forms out and back to me. The whole community. (has helped)

Is there anything new this year?

This year we did a coloring contest to raise funds. Every student in grades K-8 got a coloring sheet, and a representative was chosen from each grade level, and it’s out in front of the unit office to see who wins. The winner of that will get a popsicle party for their entire grade level. The Hillard Agency actually printed off our sheets for that.

Do you see anything changing in the future? Are you going to keep trying to grow it or do you think it’s reached its peak?

We’re definitely going to keep trying to grow it, just to raise as much money as we possibly can for this great cause. This year, we are doing another contest where the teacher who raises the most money has to sleep on the roof of the school. All of our specialist teachers have cans outside the office with their faces on them, and whichever teacher the students vote for the most by donating money has to sleep on the roof. The coloring sheet winner and the sleep on the roof contest winners will be announced at the assembly. I would also like to thank Miranda (Hahney) with the high school cheerleaders, Maddison (Perkinson) with the junior high devilettes and Sarah (Bouton) with the high school Devilettes. They’re all performing at the assembly and the high school cheerleaders have passed out necklaces and bracelets. They’ve had a bake sale.

This is really a community thing, isn’t it?

It really is. It’s just amazing. DeDe was so amazing and so loved, and it’s just even more special that the community loves this as much as we loved her. She’s shining through, even now.

I just think this is a great opportunity to show the students that people can come together for a cause. We can all work together and fight for the same thing. It teaches them about being sympathetic and realizing that we can help each other out.