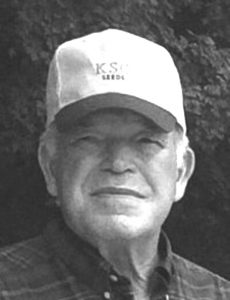 Ed was born June 6, 1945 in North Okaw Township the son of Robert Elbert and Ruby Miller Beauchamp. He married Donna J. Randall on February 28, 1964. His father had to sign papers since Ed wouldn’t have been 18 until June.

He is survived by his wife of 57 years, Donna Beauchamp of Lovington; two daughters, Trudy Feyereisen of Holland, Michigan; Angie (Darren) Powell of Lovington; granddaughters, Taylor and Michaela; brother, Rick (Debbie) Beauchamp of Hammond; sister, Jane (Bill) Flexser of Effingham; several nieces and nephews; brothers-in-law, Robert Randall of Elmhurst, and Rod Randall of Arthur. He was preceded in death by his parents; brother, Robert Beauchamp; and son-in-law, John Feyereisen.

Ed attended Arthur Grade School through eighth grade and then graduated from Tuscola High School in 1963. He worked at Progress Industries before he was married; started out as a hired man for Everett Decker of Bourbon; then rented a farm at Lake City in 1966; and eventually acquired more ground over the years. Ed and Donna worked side by side for 57 years. Both of his daughters, Trudy and Angie helped by walking beans. One summer they walked 75 miles alongside mom and dad. Ed would move the water jug so they would walk one more round. His daughter, Angie and her husband Darren, and granddaughters, Taylor and Michaela, help on the farm too.

Ed was a member of the Mattoon National Guard from 1966-1972; served on the Lake City Fire Department; and was on the Dora Township Board.

Ed loved his family, friends, and farming. When anyone needed help, Ed was there. When he needed help, they were there for him. He loved watching his granddaughters play softball and volleyball. He was loved by so many and will be greatly missed.

Memorials are suggested to the Mattoon Branch Carle Cancer Center.