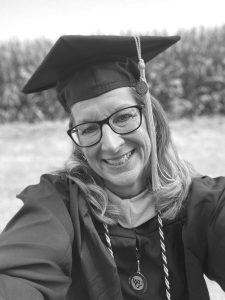 Linda Scribner, a resident of Tuscola, has graduated from Western Governors University (WGU) with a Master of Science in Nursing – Education. Scribner participated in the nonprofit, fully online university’s virtual commencement ceremony in late August, where she and thousands of other graduates were recognized and celebrated for their achievements.

Scribner, who currently works as a primary charge nurse at a hospital and a clinical instructor at a nursing college, began her nursing journey many years ago after earning her associate degree and getting a job as a staff nurse. She returned to school to com plete her Bachelor of Science in Nursing (BSN) after a new mandate, requiring nurses to hold a BSN in order to work as a primary charge nurse of the unit floor, was implemented.

After completing her bachelor’s degree, she decided to obtain her master’s degree. She had always enjoyed guiding and mentoring the nursing students who were present in her unit, so she decided to earn a Master of Science in Nursing – Education in hopes she could become a clinical instructor. She found WGU, which offered her the flexibility to complete coursework and take tests on her schedule. Shortly after enrolling, however, tragedy struck when her son unexpectedly passed away. The loss came just five years after the loss of another child, so Scribner knew the emotional and physical toll it would take on her, making her completion of the program an uncertainty.

“I was ready to just drop out and be done, thinking there was no way I could continue and be successful,” Scribner said. “But, with the encouragement and support of my fantastic mentor at WGU and my family, I was able to take a break to heal, then return to my studies – slow and steady. During this three-year journey, not only did I bury a son, but I gained five beautiful grand babies to love – plus one more since graduation.”

Scribner was able to eventually achieve her goal and realize her dream of an MSN while working full time as a primary charge nurse of her unit at a hospital.

“Now, I’m living my dream of being a clinical instructor at a nursing college,” she added.

There were 816 undergraduate and 720 graduate degree recipients from all 50 U.S. states and the District of Columbia who participated in the commencement ceremony. Approximately 70% of the graduates come from at least one of the following historically underserved populations: first-generation college students, students of color, rural residents, and/or low-income earners. Graduates earned degrees in business, K–12 education, information technology and health professions, including nursing.

Established in 1997 by 19 U.S. governors with a mission to expand access to high-quality, affordable higher education, online, nonprofit WGU now serves more than 130,000 students nationwide and has more than 235,000 graduates in all 50 states. Driving innovation as the nation’s leading competency-based university, WGU has been recognized by the White House, state leaders, employers, and students as a model that works in postsecondary education. In just 24 years, the university has become a leading influence in changing the lives of individuals and families, and preparing the workforce needed in today’s rapidly evolving economy. WGU is accredited by the Northwest Commission on Colleges and Universities, has been named one of Fast Company’s Most Innovative Companies, and has been featured on NPR, NBC Nightly News, CNN, and in The New York Times. Learn more at wgu.edu.