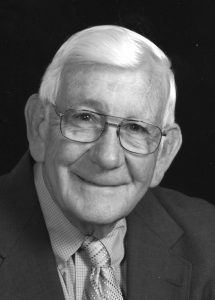 Visitation was held one hour prior to the services at the church.

He was preceded in death by his parents and sister: Grace Lee.

Leonard graduated from North Clay Community High School, Louisville, IL in 1948. He served his country in the US Army during the Korean War from 1951 to 1953.

After 38 years, he retired from USI Chemical Company, Tuscola in 1992 where he worked in the insulation department and later as an electrician.

He was an active member of Immanuel Lutheran Church. Leonard was a St. Louis Cardinals baseball fan and enjoyed fishing and making wood crafts.

With his love of singing, especially church hymns, memorials can be given to the Immanuel Lutheran Church Organ Fund.

A special thanks to the nurses and caregivers of Memory Care South at Carriage Crossing of Arcola and to Pastor Jason Braaten of Immanuel Lutheran Church.