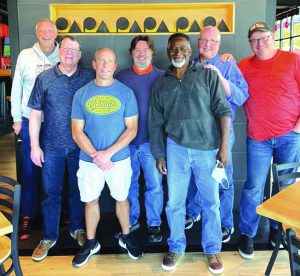 Gasoline was .62 cents a gallon, and a dozen eggs would set you back around 80 cents. Star Wars blew everyone away at the theater, and Fleetwood Mac’s “Rumors” did the same over the radio waves. In other musical news, Elvis Presley passed away at the age of 42, leaving millions of fans, including my mom, awash in sorrow.

Something else happened in 1977, however. Richard Rose began his career at WCIA. Now, 44 years later, Rose has hung up his head set and powered down his control monitor for the last time and moved on to retirement. I recently sat down with Rose to discuss how he came to the job that he held for almost a half century, retirement plans, and more.

December of 1977. My mom was postmaster at Newman, and the guy that hired me asked my mom if she knew any kids who were going to Parkland that needed a part time job. My mom said “Yes! My son needs a job!”, so I went in for an interview with Jim Fleming, Dale Fleming’s brother, and he hired me as a projectionist. Back then I was doing stuff with films and slides and stuff, working around 24 hours a week.

When you went into that, did you have any idea that you would spend almost a half century there?

No! I was going to school for something else and I went to work at channel 3 and kind of caught the bug. A full-time position, not an engineering position, came up and I took that. Then in 86 or 87, I got the engineering bug and went back to Parkland and started taking classes, and then an opening came up and God Bless Mr. Fleming. He believed in me, took a chance and hired me and I just stayed.

When you graduated in what was it 1977, what did you want to do?

I graduated from Newman in the class of 1976, and I was going to be a micro precision specialist, working on watches, clocks and small electric engines and that kind of stuff, so when I went back and started engineering classes, some of the classes I was taking were the same classes I had taken in 1977 & 78. I never got a degree, so I just took classes until I was confident enough to pass the test (Certified Broadcast Engineer Exam) and then applied to the FCC for a permit. I got it and off we went.

What’s the best thing about your job?

It’s warm in the winter and cool in the summer! <smiles> It’s dry when it rains.

What’s the worst thing about your job?

Has the industry changed over the years?

What would you say has been the biggest change?

You have to be an IT guy now. Before, things came in on phone lines. Then we went to tape and things came in on tape. Then we got all of our shows off the satellite, which we still get CBS off the satellite. Commercials came to us in various ways. Now everything is on a computer. Commercials come to us on MPEG files that we have to convert. An hour-long show takes five minutes to download. We prep it and it’s ready for air. The other change is that before prep was pretty much done daily. So, what was going on air on Tuesday was prepped on Monday. Now you’re two or three days out. What you’re prepping on Monday might not air until Thursday. Just push a button and away it goes. <smiles> Another thing that’s changed is when I first started as a “TD”, with some switches, it was all by hand.

Technical Director, the guy running master control. Everything was by hand, pushing buttons and all that, but now it’s all automated. You go in and the first hour of my job is setting up automation, putting in the correct times, and then I just kind of sit back and watch it go.

They called us Master Control Operators. We did two jobs. Master control operator, who makes sure that you’re seeing what you’re supposed to be seeing on the air, and then video operators, who preps all the shows and commercials, making sure it’s ready to go when it’s needed.

What other types of jobs are there at Channel 3? I assume your entry level job is no longer there?

It’s long gone! We have the newsroom. We have production people, people who run audio, run graphics, play back the videos for the news. We have camera operators, prompter operators. We have a sales department. We have a department we call 509. If Tony Hooker wants to make a spot, the salesman says “yeah, we can do that” and then you get in touch with one of the creative people and determine what kind of spot you want to make.

What advice would you give someone who’s considering a career in TV?

Be an IT guy because that’s where the job’s headed. It’s really where it is now. Used to be that anyone who ran the transmitter had to have a license, but now you just have to have a licensed operator on site. That’s how they can get away with having a smart 25-year-old running master control, because the chief engineer is there so that meets FCC guidelines.

Was that your favorite job?

Yes. It’s something different and exciting every day. You get to go out and do remotes. When we do things like “Our Town”, we get to take turns doing that, so you get out and meet the public. Remotes are fun because it gets you out of the building, and the older viewing public treats you like royalty. They just eat up the fact that Channel 3 is in Villa Grove or in Arcola.

What’s your most memorable day at the controls?

At the control is probably 9/11. I TD’ing the day the planes hit the towers. It was a very stressful day to be running master control, it was a stressful day to see what had actually happened, and it was stressful to just keep seeing it happen over and over and over. I came home and I was stressed. I had a couple of beers and told Amy (his wife) I’ve got to watch Andy Griffith. She had been working all day and wanted to see what was happening, and I said “No, I’ve got to watch something else!” <laughs>

Do you have a memorable goof up? Where you pushed a wrong button or something?

Yeah! <chuckles> It was in my early days, and I hadn’t been TD’ing very long. Phil Donahue came on at 9 o’clock. We got Phil off the satellite, at 9, I was going to Phil Donahue and hit the wrong satellite and it was the guy ringing the bell for the DOW JONES. It really sticks in my head because it was only my third or fourth day.

It’s a lot easier not to make a mistake now than it was in the early days. Back in the day, a TD could have a spot that had a two-inch tape, had a projector, maybe one from our cart machine we called ACR, or could have slides. In one commercial break, you could have used every possible form of media.

Last question. What are your plans for retirement?

We have a grandbaby coming in November so Amy’s taking some vacation and we’re going to spend time with our grandbaby. We’ve got some friends in the suburbs, so we’re going to spend some time with them. I’m just going to take it easy until after the first of the year, and then I’ll probably start looking for something, 16-20 hours a week. I’m going to volunteer at the (Rural Grace) food pantry in Murdock. That’s something I’ve always wanted to do and just couldn’t because of my hours.