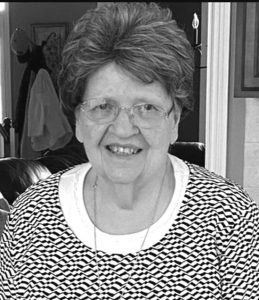 Shirley Hines, Indianapolis, formally of Tuscola, IL passed away peacefully at her home on Monday, September 20, 2021.  She was 86 years old.

Visitation was held 1 hour prior to the services at the church.

Shirley was born on October 13, 1934 in Cisne, IL, a daughter of the late Orville and Doris (Grove) Young.

Shirley graduated from high school in Louisville, IL and set out on her own to meet the world. She moved to Tuscola at age 18 and found employment as a telephone switchboard operator. She also had jobs at Farm Supply and later in life she worked as a receptionist at the Tuscola Water Company.  In late 1955, she met a young man named Jerry Hines on a blind date and it was love at first sight. They married on June 2, 1956 just seven months after that first date.

Shirley was a lover of music and poetry. She was a fine piano player, and enjoyed writing poems as a hobby. Her true passion though was for her family.  After seven years of trying to have kids, Shirley and Jerry were strongly considering adopting children. Shortly thereafter, their first child was conceived and 6 years later they were the parents to five children, and later to three grandchildren.

Following retirement, she picked up her love of music once again. She joined several local women in forming a “Kitchen Band” and enjoyed performing in many local settings, but particularly loved entertaining nursing home residents.  She also attended many local high school and college Show Choir concerts, attending many events led by her son, Scott.

In addition to her parents, Shirley was preceded in death by her brother Lovist Young, sister Neva (Young) Reed, and her son, Paul Hines.

In lieu of flowers, the family suggests a memorial contribution be made in Shirley’s name to the Alzheimer’s Association.